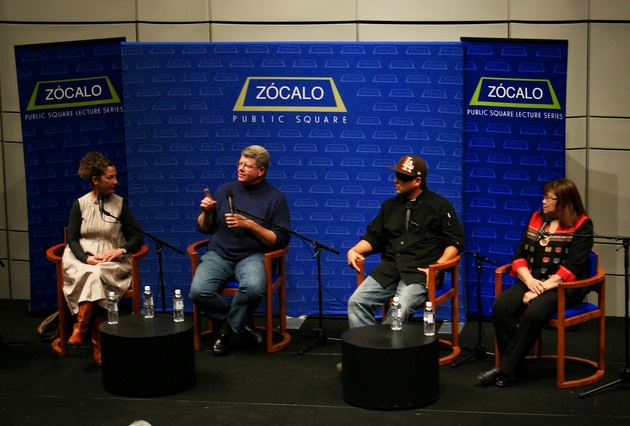 What makes for some authentic Genoese ravioli? It’s not cheese and tomatoes.

Pulitzer Prize-winning L.A. Weekly food critic Jonathan Gold told the full house at the Skirball Cultural Center the key ingredients. “There’s a little brain, there’s a little liver, and what’s thought to be the essential part of it,” he said, “is a little scrap of cow’s udder.”

Audience groans notwithstanding, the “chewy uddery goodness” was a matter of necessity more than authenticity – it tends to be a cheap, easily found item in Genoa. In Los Angeles, it’s probably not so easy to find udder for dinner, but it’s easy enough to find good ravioli.

Gold discussed authenticity – the difficulty of defining it, much less attaining it – with it some of Los Angeles’ most highly regarded chefs. Roy Choi of KoGi, Jimmy Shaw of Lotería Grill, Nancy Silverton of Mozza, and Sarintip “Jazz” Singsanong of Jitlada talked about their philosophies of authentic food. 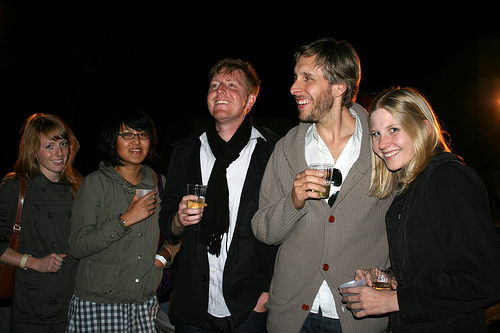 The panel had a difficult time coming up with a definition for authenticity. As Gold noted, local necessity often forms authentic dishes. French fishermen, for instance, put every bit of “bony, cheap, unsellable trash fish” in bouillabaisse, now made in expensive restaurants with lobster and monkfish. One Korean dish – “delicious” and authentically Korean, said Choi and Gold – includes Top Ramen, hot dogs, and spam. And the “authentic” cuisine of Los Angeles, Gold said, could be the acorn mash of Native Americans, the grilled beef of the Spanish, or the smoothies and California rolls of today.

“I suppose that any of us living here would be perfectly qualified to turn up our noses at their smoothies” elsewhere in the world, Gold said to a laugh. He added, making for a fine definition, “Authenticity is…feeding a very specific hunger.”

But the chefs did seem to agree that authenticity came from some combination of ingredients, method and local origin. Silverton raised the notion of the authentic chef – of the four assembled, she outed herself as “the only impostor.” 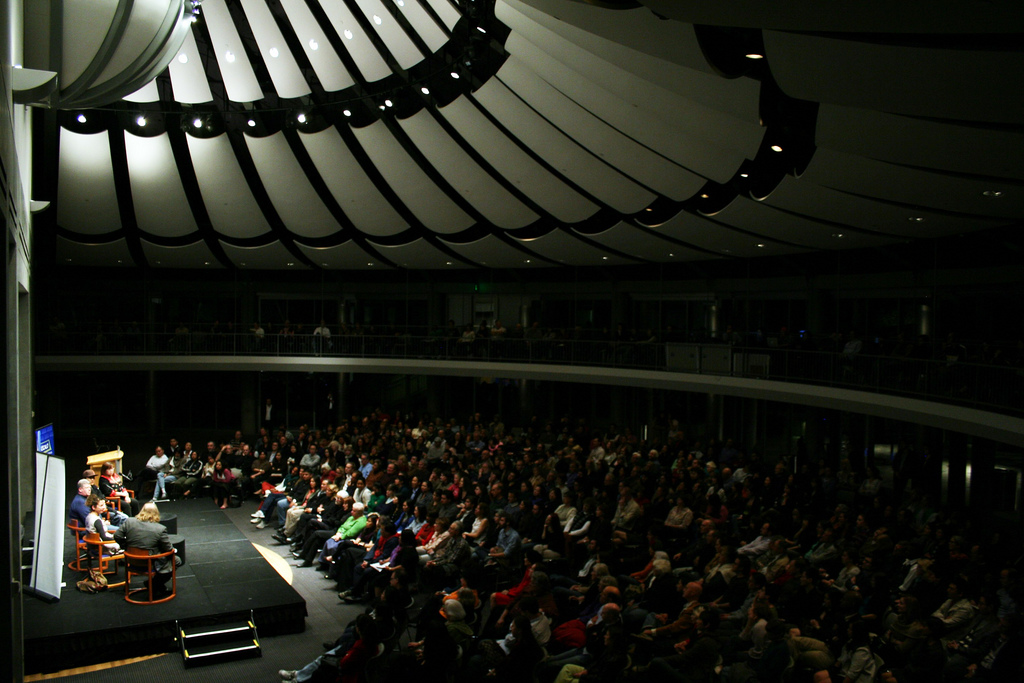 “I’m Jewish. I’m from the San Fernando Valley. I have no Italian genetics within me. But I love Italy,” she said. And though she studied Italian cuisine, lived and cooked there, and brought her knowledge to Los Angeles, her restaurant Campanile failed to qualify as Italian. “It was called Cal-Italian,” she said. “That was the name given to non-Italians who opened wannabe Italian restaurants.” Mozza, her latest effort, opened with the help of two “real authentic Italians” did qualify as a full-fledged Italian restaurant, even though, as she noted in Q&A, she sometimes receives a comment card with “This pizza is awful” scrawled on it in Italian. And panna cotta – a dish Silverton serves there – may have been perfected in America, but it’s now on many an Italian menu, as Gold noted.

Shaw, Singsanong, and Choi where all born in the countries whose food they now cook in (or in the case of Choi, adapt to) Los Angeles. Shaw grew up in Mexico and, coming to California 20-some years ago, missed Mexican food in all its variety, and just wanted somewhere he could take a girl out. “Movies and tacos, weddings and tacos, whatever and tacos was a great date at whatever place on the economic scale you are,” he said. “When tacos were put on fast food trays you lost the date.” And Mexican food in California was homogeneous then and is still, he said, “in its spaghetti phase. It hasn’t gone to its pasta phase yet.” With Lotería Grill, he seeks to bring true Mexican food, in all its variety, to Los Angeles.

Singsananong also missed the food of her native Southern Thailand, where her family cooked meals with ingredients from the garden. Now she uses ingredients grown in her Los Angeles backyard, and at her Thai Town restaurant. “Even if you don’t know how to cook Southern food, you know how to eat it,” she said to a laugh. “It’s very spicy.”

Choi lived in Los Angeles for much of his childhood but grew up in his family’s Korean restaurant, learning the recipes that he uses today, sometimes bringing ingredients from Korea, only putting it into tacos. “When they got blended together, it was almost like two friends that should have met a long time ago,” Choi said, to applause from the crowd. 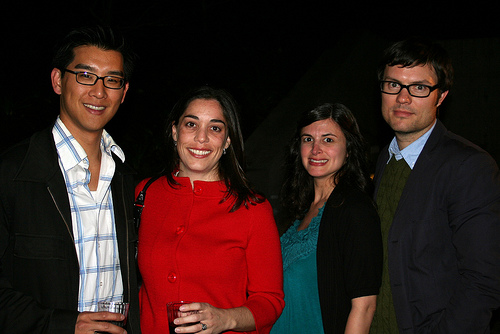 Choi’s isn’t the only restaurant that embraces a transformation in native foods. Shaw said he can appreciate a good Cal-Mex as authentic California cuisine, drawing from Tex-Mex, southwestern, and Mexican border cooking. And while he and Singsananog keep their restaurants as honest to their homelands as possible, Silverton sometimes improves on the original. A restaurant in Umbria, a region of Italy where Silverton has a home, serves guinea hen on toast, or, in Gold’s words, a “ragged strap of fowl” on “weird tasteless salty bread.” Silverton’s take, served at Osteria Mozza, is “beautifully presented, beautifully roasted” and placed on La Brea Bakery Bread. To leave “all the scraggly bits,” Silverton said, “just wouldn’t be our nature….I guess I wouldn’t know how to make it that way.”

Choi’s is the greatest departure from the original, combing Korean barbequed meats with Mexican seasonings in a tortilla, served primarily from a truck. He came up with KoGi with a friend while he was out of a job. “It was actually kind of a therapy, cry-on-the-shoulder meeting,” Choi said. “He bought a cup of coffee for me and he said, let’s open a taco truck.”

“The food that we do is definitely not authentic,” he said. But, he added later, he does seek to capture something uniquely Los Angeles: “I tried to tap into the rhythms of the city, especially between,” he said to an appreciative laugh from the crowd, “Alvarado down to Crenshaw, from like Venice up to Melrose….KoGi taco truck is that rhythm.” 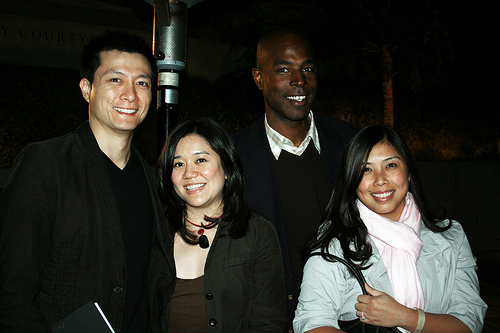 Choi is planning to move KoGi beyond Los Angeles. He joked about a KoGi truck on every highway, and noted, too, that he might just like to “open a non-descript, no-sign place on Santa Monica, on the seedy part of Santa Monica, and just cook.” But KoGi, he said, has become bigger, and he plans to fly to New York to start the expansion. “In New York, everybody looks at L.A. like we’re chopped liver,” he said. “For us to bring a piece of L.A. to New York, I take a little bit of pride in that.” He also envisions KoGi changing how Americans eat by creating a culture of street food.

Silverton, though previously opposed to opening more Mozzas, announced to a gasp from the crowd that she intends to launch both an Osteria and a Pizzeria in Singapore.

As for Singsanong, her recipes are staying in one place for now, with her and her family. “I have to keep the secret,” she said. “I promise, one day, it will go out to the public. But first let me pay off all the bills.” 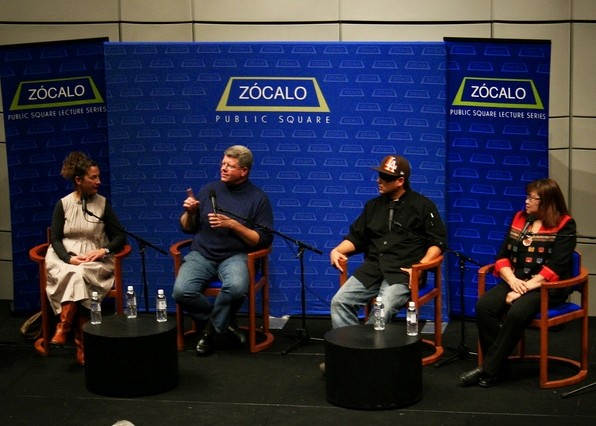