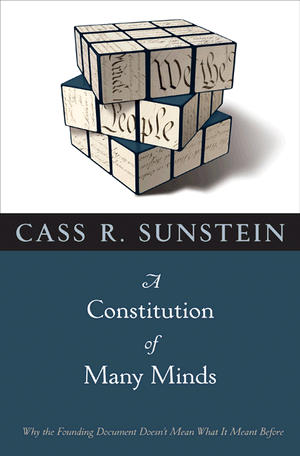 A Constitution of Many Minds: Why the Founding Document Doesn’t Mean What It Meant Before

To begin to understand Cass Sunstein’s complex, deeply thoughtful exploration of constitutional law, it’s helpful to start with “Who Wants to Be a Millionaire.”

As viewers of the popular game show know, contestants can turn to the audience for help on a difficult question, and somehow, the audience is usually right. “Because many people are more likely to be right than wrong, and because the errors are likely to be random,” Sunstein writes, “it should be no surprise that on most questions, most people get it right.”

Sunstein applies this to a broader concept of crowds, asking in what instances a crowd – whether it’s our country’s founders and existing practices, our contemporary public, or a group of foreign nations – can guide sound decisions on constitutional law, and in what instances judges should pay attention to them.

Our Constitution, despite having lasted longer than most and with relatively few changes, is not set in stone. Sunstein argues that each generation makes its mark, sometimes by presidential or congressional act, sometimes by the courts and their judges who, he shows, operate under a range of philosophies and assumptions far more nuanced than “conservative” or “liberal,” or even constructionist or activist.

When it comes to the Constitution, interpretation can itself mean many things – not simply sticking to the intent of the Founders, whatever that may be. Any particular approach, and its consequences, must be defended, Sunstein argues, noting that some approaches work better in some societies. There are traditionalists of various degrees. Originalists like Justices Antonin Scalia and Clarence Thomas “believe that the Constitution should be understood to mean what it meant at the time that it was ratified,” where rational minimalists like Ruth Bader Ginsburg are willing to establish rights not mentioned in the Constitution – like privacy – and to question tradition even as they try not to deviate much from it. There are “visionaries” of various degrees too, running the gamut from conservative to liberal, who are more prone to building and applying theories.

Adhering to any philosophy that enshrines tradition raises some questions: which traditions to keep, how far to go back, and what to do if circumstances change. Challenging discrimination, for example, has become something of its own tradition in constitutional law, Sunstein notes. And he shows that some, like Justice Thomas, argue that the War on Terror is a uniquely new sort of circumstance, one for which some new wiretapping powers are justified.

If what makes a tradition is who and how many hold it dear, something like what Sunstein calls due process traditionalism might be a sound way to interpret the Constitution. But enshrining the practices of people, or other countries, rather than of people and judges past brings its own difficulties, Sunstein argues. People are often swayed by prejudice, or simply by what others around them believe. There is no real “vote” on tradition, at least not in the way that a jury votes, or audience members on a game show pick an answer. Taking other countries’ laws as “votes” is even more problematic: laws in the country may differ from practice, and the politics and process surrounding the laws could differ greatly from our own system.

Still, Sunstein does argue that judges should pay attention to the public “if many people disagree with their initial inclinations.” Backlash against a court decision, Sunstein notes, can affect politics, spark unrest, or delegitimize the court system. Sunstein also counters that paying too much attention to people, though, could create a “heckler’s veto,” and judges often don’t have enough information to know public opinion on and predicted public responses to a decision.

The “many minds” argument is used equally, Sunstein shows, by traditionalists, populists, and cosmopolitans. Traditionalists rely not just on the Constitution itself, but on the interpretations and impacts of politicians and judges and other leaders throughout history; populists proclaim the importance of our present-day beliefs, since we have the benefit of hindsight; and cosmopolitans promote the wisdom of nations. No single lens is best for interpreting the Constitution, Sunstein suggests, but by understanding the arguments, “we should be able to specify when [they] deserve respectful attention – and when they should be rejected.”

Excerpt: “But imagine a society – let us call it Scalialand – in which the original public meaning of the Constitution is quite excellent, in the sense that it ensures well-functioning institutions and protects a robust set of rights, in a way that fits with a reasonable account of both democracy and freedom. Imagine that in Scalialand, the democratic process is also very fair and good…and that the nation’s admirable legislators are entirely able to make up for any inadequacies in the founding document. Suppose finally that in Scalialand, judges, unleashed from the original public meaning, would do a great deal of harm…. In such a society, an originalist approach to constitutional interpretation would seem best.”

and Infotopia: How Many Minds Produce Knowledge