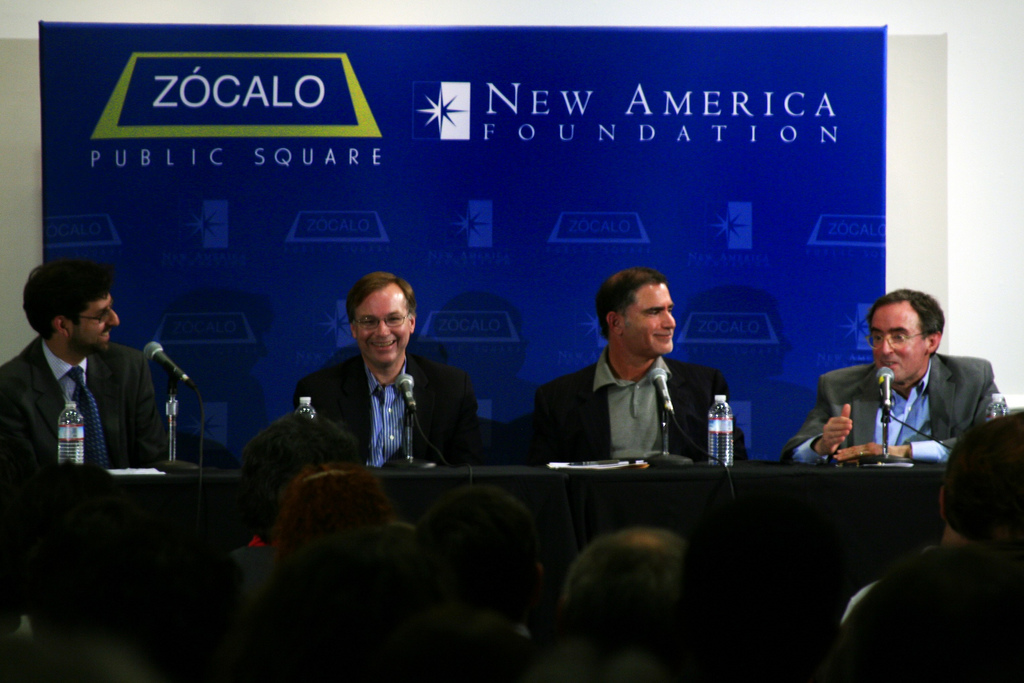 Greeting what he called an “incredibly packed and clearly lively crowd” at the Fort Mason Center, moderator David Folkenflik had a guess as to why so many showed up to chat about the future of journalism.

“It’s not because you’re happy with the newspapers arriving on your lawn,” he said, “if you’re still paying for it.”

Passing if not past 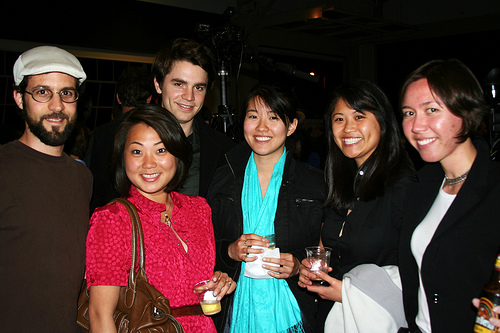 Newspapers today have it so hard, Folkenflik noted, that talented reporters lose their jobs even if they’ve just won a Pulitzer or launched a blog about the recession. (One Chicago Tribune reporter, he said, was not allowed to write on his economy blog about his own layoff.) While readers have migrated online and are reading more news than ever before, fewer are paying for news, and advertisers are reluctant to pony up for an online ad what they would have for a print one, Folkenflik and Kinsley noted. Print itself seems dead, and perhaps so does the concept of a newspaper.

“I don’t think there’s anything magical about newspapers, or an entity that simultaneously publishes crossword puzzles and dispatches from Baghdad,” Coll said. “I think that is a beautiful thing and that is passing.” 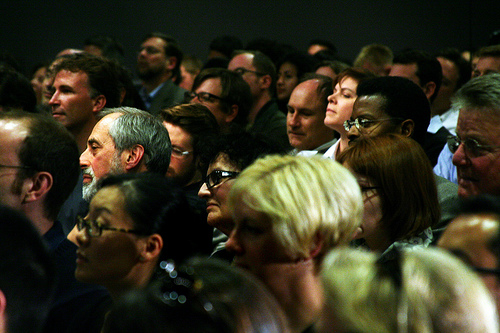 Coll, in his comments and during Q&A, outlined the factors that made newspapers what they are today. The objective news source, he said, “is a cultural artifact as strange as opera.” In the postwar period, news writers admired and borrowed from the scientific method-writing evidence-based, edited news. Journalism became a proper profession with standards, something like medicine or law. Newspapers became “quasi-monopolistic” in their business model, Coll said, driven to objectivity as much by rules as by the demands of broad metropolitan markets with a variety of consumers. It was the monopolistic model that protected the large cost structure of newspapers, Coll said. (The Post has about 800 staffers, Coll noted; Bronstein said that the Chronicle has 575. And Kinsley said, “The Los Angeles Times had about 800 in the editorial department alone.”)

But with the Internet, newspapers faced a shift. As Kinsley noted in Q&A, newspapers – once small enterprises with vibrant local competition, then near-monopolies – have every common-language paper as a business rival. But newspapers squandered the opportunity the web provided for free distribution and zero printing costs. “Newspapers blew it,” Kinsley said bluntly. “They should have been able to keep the classifieds. They had the brand, which is much more important than the technology that Craig Newmark had.”

Bronstein noted that his Chronicle once invited the craigslist.org founder to the offices, convinced that they were “going to kick his rear end.” As Bronstein admitted, it didn’t quite go as planned. And newspapers were mistaken to “shovel the content of the newspaper on the website and figure that was it,” he said during Q&A.

All three panelists noted positively the experimentation in the field, like the low barriers to entry for participants in news coverage, the talent and dedication of some commentators, and new models like non-profit news. Bronstein cited San Francisco efforts like Spot Us (a site that lets the public fund, auction-style, stories of their choosing, which, Bronstein noted, is “fraught with danger”) and the many “gadflies” who report city goings-on, if with a slant. Things are moving quickly, he said, “although sometimes in a circle.” Folkenflick noted sites like Voice of San Diego – where some newspaper refugees landed – and Talking Points Memo, a blog that successfully exposed corruption in U.S. Attorney firings, a story that might have been a big newspaper investigation.

But Kinsley, noting that it’s hard to say anything bad about new endeavors, did offer one case against them: “They don’t have the professional standards that guarantee a level of accuracy.” However, he noted, the Internet very quickly corrects errors, and embarrasses those who made it, if they don’t offer a correction themselves. “It’s different from the traditional ways in which accuracy has been guaranteed. It will take getting used to,” he said.

Coll said he was agnostic about the efforts so far, but still expressed optimism about young journalists, and the business in 15 to 20 years. The problem, he said, is getting from here to there while maintaining journalistic practice in the public interest.

Coll and Bronstein agreed that the current landscape misuses journalistic talent, and that new efforts are missing professionals (even though, as Bronstein noted, “there are a lot more professionals available”).  Kinsley questioned Coll on the matter, asking whether a blog could have broken Watergate or the torture scandal. Coll did not rule out the possibility, but noted that large newspaper businesses insulate journalists from threats. (Kinsley said wryly that “a bunch of bloggers sitting around in their underwear” might be just as resistant to pressure as “a major corporation with shareholders”; Coll replied, “we’ll see where there courage is when they’re tested.”) Coll further noted that some investigative breakthroughs can only come through the type of trust a newspaper creates. “You don’t just answer the phone,” he said, to get a scoop. Rather, it builds from a “sort of social contract that develops between the sources and the publishing entity over a long time.”

For now, blogs are too new to tell how they would develop such relationships, Coll said; those who have broken stories are practicing something like “swarming,” distributing risks and stories across many people. And the question of the professional journalist remains. As Bronstein noted, many who contribute may not be able to earn a living wage, and the Internet still tends toward free. “There’s a vast chasm between charging for content and people paying for content,” Bronstein said. “Then there’s another vast chasm between people paying for content and making a business that works.” 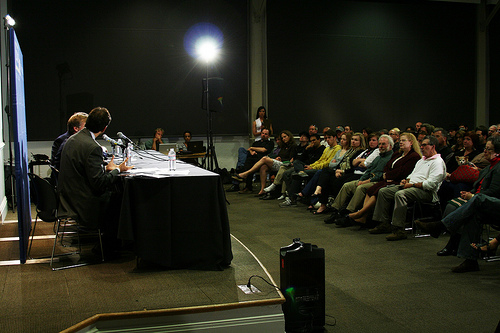 The panelists did discuss what a business that works might look like. Charging isn’t it, they seemed to agree. As Coll said, readers might be willing to pay for some information – like the trade news in the Wall Street Journal – but not, say, school board meeting coverage. And those who don’t want a paper shouldn’t be required to subsidize it for others, he and Kinsley agreed. Bronstein noted that the Chronicle’s effort to increase circulation prices could be mistaken. “I can’t sit here and tell you that that’s necessarily going to work,” he said, explaining that the paper needs to make some concessions to stay open. In any case, as Kinsley said, “You have to understand that it’s not as if readers ever paid for content. Readers paid for the paper. The content was funded by advertising.”

Aggregating news could be the way, Kinsley noted, particularly if monolithic papers collapse and several small community efforts rise, making it too unwieldy for most people to pull together all the news they want. “Someone will set themselves up as the curator of the news…sorting through those sites at 4 a.m.,” Kinsley said.

But the panelists did offer some hope for the survival of newspapers as they are today (if not in print form). Coll noted that newspapers could become part of the existing infrastructure of public broadcasting, particularly through funding from spectrum licensing fees, at least as long as it takes for new ventures and private investors to find a way to fund news. And the Europeans might have something to teach us. “European papers aren’t accused of being biased. They quite frankly are,” Kinsley said to a laugh. “There’s nothing wrong with it and I think it could be a model for how American papers evolve. Clearly there is something about community online which favors opinion, to say the least.” 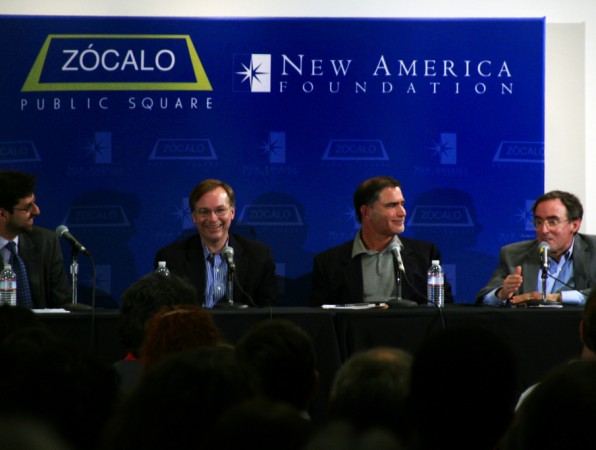