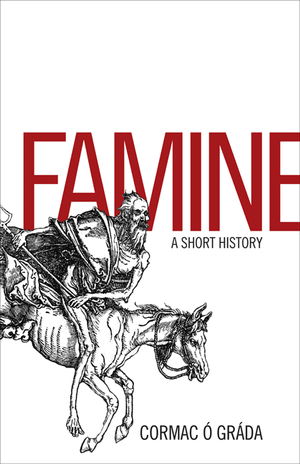 Those who have suffered famines have more vivid terms for them. The Irish called 1740 to 1741 “the year of the slaughter.” The Indians named a 1790 shortage the “skulls famine.” The Kenyans described famine as “the scramble,” and in southern Africa, in the early 19th century, one famine was referred to as the Madhlatule, translated as, “eat what you can, and say nothing.”

Wide-ranging details like these fill Cormac Ó Gráda’s Famine, a loaded, heavy word itself, evocative of deep human suffering. The data-heavy book is an anatomy of famine, cataloguing everything it is and does, with historical examples modern and ancient, evidence cited – and sometimes critiqued – from studies past, including Cicero, Edmund Burke, and Amartya Sen. Ó Gráda wonders if famines, once inevitable, common, and the object of such dread, seem to be on the wane and possibly even a problem of the past, a relic of a less connected, globalized world.

Early on, Ó Gráda devotes a chapter to the immediate, intimate suffering humans experience in famine, opening his account with pictures of skeletal children. This is his most grim portion, detailing the most desperate means of survival: crime, prostitution, slavery, child abandonment, infanticide. Thievery, Ó Gráda notes, is a major marker of famine, while violent crimes generally decline; the other sacrifices listed above come later, at a famine’s depth. The only small relief Ó Gráda offers in a tragic chapter is that cannibalism, he finds, is not necessarily a certain result of famine – evidence of it is scarce, though anecdotal accounts are many.

Ó Gráda broadens his lens to examine the less-desperate means of coping with famine. He offers a list of “famine foods,” the inexpensive and sometimes unpalatable substitutes on which victims begin to rely: from barley or maize to leaves, locusts and tree bark. He explains he mechanisms for the failure of some substitutions (why the Irish didn’t fish when potatoes failed, for instance), and which foods caused widespread disease. Migration is common to most famines, though it only provides relief to those who remain in the direst of circumstances.

He also examines survival rates, and the longer term effects of surviving. Death comes from lack of food, of course, but also largely from infectious disease, particularly in premodern famines or in famines striking places where disease is already prevalent. Ó Gráda finds that Marx’s saying is largely true – that famines kill “poor devils only” – and, perhaps contrary to expectations, famines hit men harder than women. Death tolls are difficult to count precisely, as governments downplay them and non-governmental organizations sometimes exaggerate them. Still, enough is known, Ó Gráda notes, to know that famines are not a corrective to overpopulation (Malthus is proved wrong many times herein). Those who survive will marry less and bear fewer children (particularly male children). Children who pull through could live shorter lives and, intriguingly, Ó Gráda notes, those conceived at the height of famine are more likely to suffer mental illness. But most medical research on the longer-run impact of famines, he notes, is still tentative.

Moving beyond individual responses, Ó Gráda focuses on institutional reactions to famine, tracing the transformation of government aid from the doling out of stored-up grain to incentivizing production and encouraging rather than restricting trade. He studies deeply how markets behave during a famine – the fluctuations of prices and supplies across time and regions, the market response to hoarding. Ultimately, he argues, markets are neither cure-all nor lone root cause of famines. The failure of food markets is as much to blame for famine as natural disasters and war. The 20th century famines to end all famines – the final such crises of Europe and China – were manmade creations. And as Ó Gráda notes in a lengthy case study, even the people of a country prone to famine, Bengalis, were, in one of their worst famines, the “unwitting, colonial casualties of a struggle not of their making – that against fascism.” And however distant that past may seem as markets grow ever more integrated and crisis response ever more rapid, Ó Gráda warns that without peace and good governance, we will never have a famine free world. “Even a limited nuclear war could lead to a new age of famine,” he writes. “It is as simple – or difficult – as that.”

Excerpt: Oral history and folk memory of famines may plug some of the gaps left by the lack of standard documentary sources. Ordinarily these sources are invoked only for the light they can shed on the recent past, as in the case of oral poetry describing the Ethiopian famine of 1984-1985. This example is a reminder of the porosity of memory; a mere decade or so after the event, “most peasants regretted the fact that they had forgotten” the poems composed during the famine. Even those who composed verses at the time had forgotten most of them – or perhaps did not want to remember them.

and Stuffed and Starved: The Hidden Battle for the World Food System