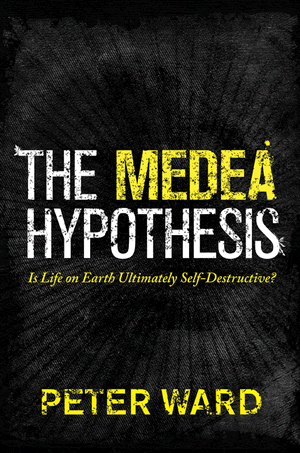 The Medea Hypothesis: Is Life on Earth Ultimately Self-Destructive?

None of the apocalyptic disasters and villains Hollywood has imagined can compare to what Peter Ward argues is the real killer. “[T]here is a killer on the loose capable of planetary-scale catastrophe,” he writes. “The killer is life itself. If left unchecked, it will hasten the ultimate death of all life on Earth.”

Ward’s Medea Hypothesis presents what he acknowledges is a minority view, a counter to the Gaian theory that has gained credence over the last several decades. Ward argues that life, left alone, triggers disasters that in turn extinguish life. Building his case like a scaffold, he begins by explaining what life is, what evolution is, and why evolution is an inherent property of life, even as it leads to the destruction of life. He takes time to list and describe the various branches within Gaia theory, and offers his hypothesis as an alternative to Gaia.

Ward also starts by turning a key element of Gaia theory on its head. Gaia argues that the Earth maintains several regulatory systems that keep temperature and atmospheric gases at just the right levels to let life flourish. But Ward points out that some of those systems also contribute to what could lead to a massive loss of life on Earth, long before the Sun grows hotter and larger. “The Earth will lose one resource without which the main trophic level of life itself – photosynthetic organisms, from microbes to higher plants – can no longer survive,” Ward writes. “This dwindling resource, ironically, (in this time when human society worries about too much of it), is atmospheric carbon dioxide.” Carbon dioxide, today’s villain, has in fact been declining steadily for the last 200 million years, Ward notes. If we manage to avoid over-polluting the Earth, that is, we could suffer from a lack of CO2, and we’ll have land plants to blame.

In fact, life on Earth has tended toward its own destruction since the dawn of life, Ward argues. The crux of the Medea hypothesis is the Earth’s declining biomass; even as life has grown more complex and evolved, biomass has declined. It started early on with the evolution of our form of DNA-based life, which Ward says likely defeated other forms of life in the Earth’s “greatest mass extinction.” Early Earth’s methane atmosphere nearly destroyed that early life, in any case. It’s a result that, Ward says, cannot be predicted by the Gaia theory. The rise of oxygen in the atmosphere, while a happy event for future human life, also caused massive extinction. Life was also responsible for two “snowball Earth” episodes and the rise of toxicity in oceans. Ward argues also that the “Cambrian Explosion” – the flourishing of complex plant and animal life – decreased the Earth’s biomass. And even extinctions spurred by extraterrestrial events, Ward says, were exacerbated by life.

The trend is set to keep going: what makes for a successful species – particularly, the overwhelming or dominating of other species – doesn’t necessarily make for a successful biosphere, Ward claims. Humans are, perhaps, the most successful species, and the most damaging to the biosphere. Our deforestation of the Earth has led to rates of extinction far beyond what’s natural. But, as the top-of-the-heap species, only we can manage and save life on Earth. Here, it seems, Ward agrees with those Gaia proponents who advocate massive human involvement in managing the Earth. Ward suggests major and planetary engineering, beginning with reducing carbon dioxide now, and increasing it in the future.

Excerpt: Radiation poisoning through fission or fusion bomb attacks would be the greatest human Medean effect, and the current arming of the Muslim world, whose regions show the highest rate of population growth on the planet, is the greatest threat.
The way to stop warfare is to increase the standard of living all over the world. This will only happen through even higher rates of Medean activity by humanity–burning more coal and oil, building more nuclear power plants that produce plutonium wastes, building more ‘infrastructure’ such as continent-spanning highways where none now exists. None of this will help take us back to ‘nature,’ and in some cases it will further reduce biomass and diversity over the next few centuries. There is no stopping this, but the alternative seems to be long-term privation of some societies…. Though we should save as much of nature as we can, of course, it will probably not be much. Yet, lots of golf courses and game preserves are still better than a radioactive world.

Further Reading: The Life and Death of Planet Earth: How the New Science of Astrobiology Charts the Ultimate Fate of Our World

and Six Degrees: Our Future on a Hotter Planet