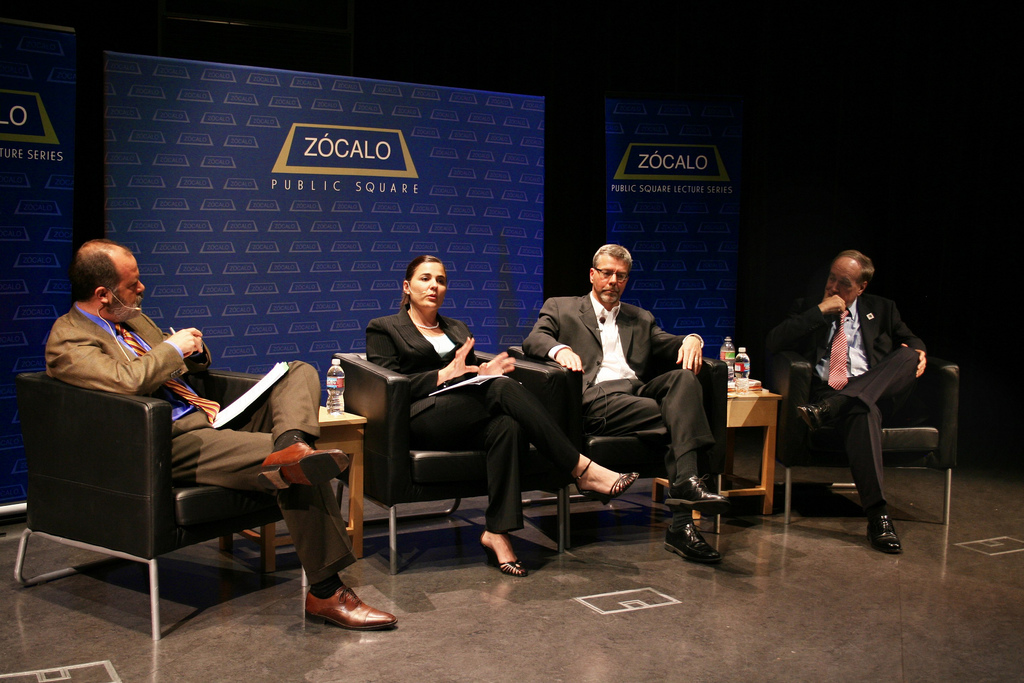 Though today it might be hard to tell, California once boasted the nation’s premier public schools.

“There was a time when California’s education system was really the envy of the nation,” said moderator and Los Angeles Times editorial pages editor Jim Newton to the crowd gathered at the National Center for the Preservation of Democracy for the Zócalo-Public Policy Institute of California event. Forward-looking governors presided over an expanded higher education system that offered valuable and affordable opportunities.

“Today by contrast, California’s education troubles are manifold. That has implications for our economy, our social order, and, in a larger sense, our sense of fairness and justice,” Newton said. A recent PPIC study has found that by 2025, the California economy could face a shortage of one million college graduates.

Newton joined Executive Director of the Campaign for College Opportunity Michele Siqueiros, PPIC Associate Director of Research and Senior Fellow Hans Johnson, and UCLA professor and Co-Director of the UCLA Civil Rights Project Gary Orfield to discuss how California is failing its college-bound students and the general public, and what can be done about it. 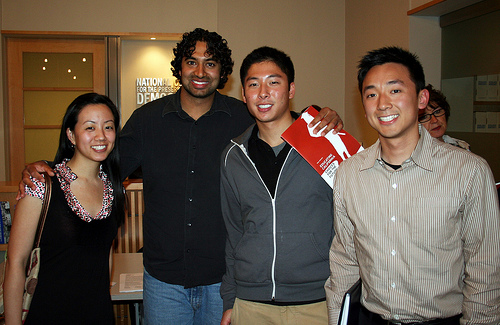 As part of a series of studies examining California’s future and encouraging policymakers to think about the long run, PPIC examined education, co-author Johnson explained. The state economy demands that four out of every 10 of its workers have a college degree to succeed in the labor force. “Yet our population is changing in ways that make it unlikely for us to meet that demand. So we’re faced then with two very different versions of a California future,” Johnson said. In one, Californians would be much less educated, meaning lower income taxes, less tax revenue, and higher demand for social services. In the other, Californians provide better educational opportunities and mores positive outcomes.

There is, as Johnson put it, “quite a bit of room for improvement” in California’s education system. The state lags in the percentage of its high school graduates it sends directly to college. Its public education is certainly big, with three of four bachelor degrees granted in the state coming from a public institution. And the community college system educates large numbers of students, but only 20-40% of its students successfully transfer to a four-year school. Cal State University graduation rates could be increased, Johnson said.

Orfield emphasized that the elementary and secondary public education systems have been “going down like a rock for decades now,” and it hurts higher education systems. As Johnson noted in response, lower-level education haven’t been able to raise fees, explaining some of the decline.

And much of the problem is larger still – systemically and demographically. The education code for California, Siqueiros said, holding her fingers several inches apart, “is this thick and the smallest print you’ve ever seen.” (The state Constitution may well be dozens of pages too long, Orfield added.) Johnson pointed out during Q&A that the state’s Master Plan for education was meant to apply till the year 1975, but hasn’t been revised or updated since. It was, he said, “forward-thinking for its time, but it’s almost regressive now.” 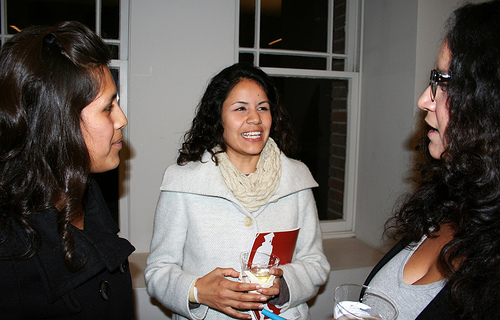 As for population shifts, Siqueiros noted, Baby Boomers, a highly educated group, are leaving the work force and demanding more services. Growing costs and cuts make college less accessible for successive generations. “It’s sort of the antithesis of the American dream,” she said. “We all expect that our children will have better opportunities than we’ve had.” ?Johnson added that Californians can’t “migrate our way out of this problem,” as we have done in the past. The state is attracting fewer domestic immigrants, and losing college graduates to other states. International migration falls short of the need.

And though most Californian students are born in California – meaning immigration and illegal immigration play less of a role in the education problem, as the panelists noted – ethnicity and poverty post serious challenges. Latino parents, Johnson said, are more likely to agree that college is necessary for their children’s success than non-Hispanic whites. But, as Orfield said during Q&A, many California schools face what he called “triple segregation,” dealing with a student body that is uniquely impoverished, largely Latino, and speaks English as a second language. These schools, Orfield said, often have the least experienced teachers, the highest turnover of those teachers, highly unstable enrollment, and more instances of sanction by the state and federal governments. “We assume that we can actually equalize things within that context,” Orfield said. “Nobody has ever done that.”

In today’s economic climate, fixing the education system is especially daunting. The state plans severe cuts in education – including eliminating the Pell Grant program – and the schools are considering emergency tuition increases, which, Orfield noted, are rarely reversed once recessions pass. 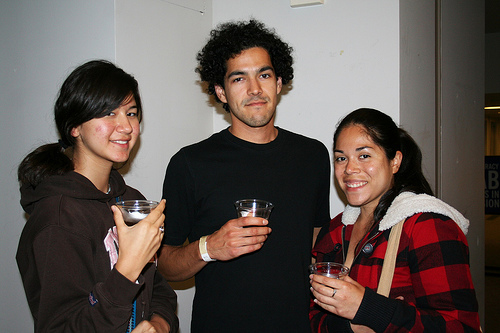 And the reason for the difficult economic climate has a lot to do with California’s underlying governance problems, the panelists said. Johnson emphasized the problem with the state’s volatile revenue stream, overly reliant on real estate and stock revenue. Its past propositions, particularly Prop. 13, “wiped out the local tax base,” Orfield said. But Orfield primarily emphasized the problem of requiring a two-thirds legislative majority for budget-related bills to pass. And the legislative minority is “dedicated to an ideology that nothing else matters but not raising taxes,” he said. “It’s as if people pledged to drive their cars in a straight line, and they find out there’s a cliff in front of them and have to go on no matter what.”

On a more positive note, Johnson noted that PPIC polls show that, compared to other government institutions, Californians still have great confidence in and goodwill toward public education.

Some small-scale changes, Siqueiros and Johnson emphasized, could make big impacts for relatively low costs. Primary among these is making the process of going to college, or transferring to a four-year college, easier to understand, particularly to students whose parents didn’t attend college. Secondary and higher education institutions can also set their sights slightly higher, Johnson said: moving to the national average in terms of college matriculation rates; improving the transfer rate between two- and four-year schools; and increasing graduation rates at Cal States. The state could also create different kinds of post-secondary education, like career training tracks that are still academically strong, Johnson and Orfield said. As Siqueiros said, the emphasis should be on maintaining accessibility, and keeping cuts away from financial aid programs.

Primary and secondary schools could use some changes as well, the panelists said. Orfield pressed for targeted tutoring and classes as an alternative to social promotion and to flunking students. The panelists suggested prep at ever-earlier ages: early assessment of skills for high school juniors; default college-prep curricula; college counseling beginning in middle school; smoother middle- to high school transitions; smaller elementary classes and better preschools.

And bigger reforms would help too, the panelists said: a revamped state Constitution and tax system, for one, that would allow for increased revenue, something all the panelists advocated. “I’ll say something very unpopular, but I think more of us need to share the [tax] burden,” Johnson said. “When you say how should we raise revenue, it’s always the other guy. It’s never me.” 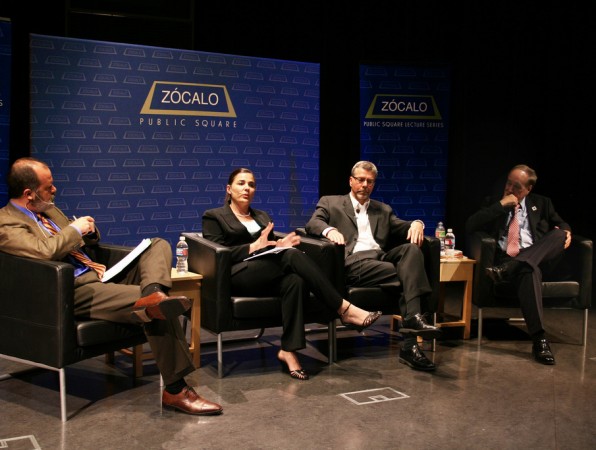