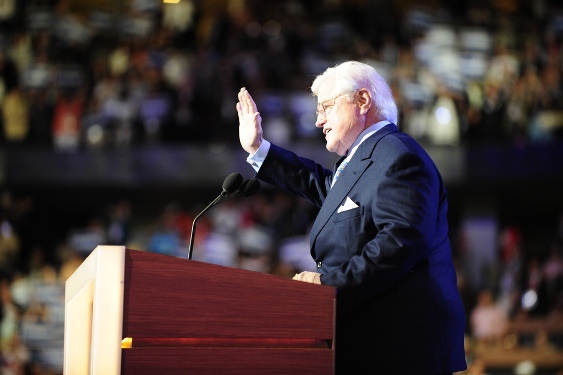 Vincent Bzdek, Washington Post writer and editor and author of Woman of the House

, explores the legacy of three Kennedy brothers in his latest book, The Kennedy Legacy: Jack, Bobby and Ted and a Family Dream Fulfilled

. Below, an excerpt about the youngest brother, Ted Kennedy, who died late Tuesday night. 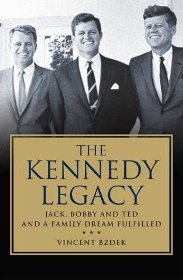 A worshipful mystique forever surrounds his slain brothers, despite their flaws, but Teddy has lived long enough for the nation to see a Kennedy at his best and at his worst. Despite tabloid headlines and the sneers of conservative pundits, though, he still managed to keep the Kennedy legacy relevant. And today, it seems we are in another Kennedy moment. The traditional liberalism he has long stood for has made a comeback. Of late, standing ovations in the Senate are what define Ted Kennedy. For 50 years, in a life filled with tragedies, embarrassments, controversy and triumph, he has done the one thing his brothers never got the chance to do: He has persevered.

Perseverance may well be Edward Kennedy’s crowning contribution. He has been the only real constant in the half-century construction of the Kennedy legacy. In stubbornly keeping on, he has managed to keep alive something many of JFK’s and then Bobby’s contemporaries thought died with those men in the 1960s. “When Bobby was killed, my generation was almost critically wounded,” Senator Walter Mondale said five years after that night. “As a matter of fact, I don’t know, we may never get over it.” What those kinds of sentiments about JFK and Bobby deny is all the good that’s been done in their names since. More than anyone else, Ted took their deaths and tried to alchemize something positive out of them. For 49 years, Ted’s guiding purpose has been to keep aflame the torch of sacrifice, optimism and public service that JFK first lit in 1960. What they dreamed, he built, law by law. And he’s been helped by legions of people inspired by his brothers, an entire Kennedy Generation.

Yet in the Kennedy pantheon, Ted is still the overlooked son, “the runt of the litter,” “the baby of the family,” the one who has never quite risen to the stature of his martyred brothers. It may be finally time to rethink that legacy. John and Robert captured the country’s imagination, but it has been Ted who has most improved people’s reality. If Ted himself had ever been elected president, his influence would not have lasted so long. In many ways, because of his longevity and single-minded dedication to the memory of his brothers, Ted has become a greater politician and left a greater legacy than either John or Bobby. John always called Ted the best politician of the family. In nearly five decades of behind-the-scenes Senate work, he has finished much, though not all, of his brothers’ unfinished dreams. “This is the most consequential legislative career in the country’s history,”6 said Thomas Oliphant, who as a correspondent and columnist for the Boston Globe has chronicled Kennedy’s career. “It probably had more impact on more people than many presidents. In actual, measurable impact on the lives of tens of millions of working families, the elderly and the needy, Kennedy belongs in the same sentence with Franklin Roosevelt.”

Whether you agree with Kennedy or not, he has made flesh the progressive idealism of John and Bobby – and he has made that idealism last. Political commentator Molly Ivins said, “To tell the truth, Ted Kennedy has had a greater impact on this country than either of his famous brothers.” No other Kennedy can claim a 47-year legacy. Few senators can, either – he’s currently the second-longest-serving senator, and the third longest in the history of the chamber. JFK had his 1,000 days in the White House. RFK had his 82 days on the campaign trail. Ted Kennedy’s days in the Senate number more than 17,000 – and counting. Political columnist David Shribman put it this way: “His brothers’ words are in large letters on the sides of buildings and in the hearts and memory of a nation. But the youngest brother is the fine-print Kennedy. His words are in the fine print of the nation’s laws.”

Kennedy has cast more than 15,000 votes and written more than 2,500 bills. His fingerprints are on most of the major social programs that have been launched in the last 40 years. “He has done more for human happiness than anyone in Congress,” said Carol Chodroff, a human rights attorney who works closely with Kennedy. He made his maiden speech in the Senate in support of the Civil Rights Act of 1964, which outlawed segregation in theaters, restaurants, hotels, swimming pools, libraries and public schools. He continued as a strong advocate for civil rights during the 1960s, 1970s, 1980s, 1990s and the current decade, helping to ensure passage of the Voting Rights Act and substantially improving the rights of the handicapped, women in the workplace, immigrants and refugees. He introduced the bill that created the Martin Luther King Jr. holiday. He got 18-year-olds the right to vote.

He has campaigned for universal health insurance for 30 years, and from his hospital bed last year was orchestrating efforts to pass a bipartisan healthcare reform plan in early 2009. Along the way toward his elusive goal he has dramatically increased cancer research funds, created portable health insurance for workers, hammered through a patient’s bill of rights and instituted closer government supervision of health maintenance organizations.

The mountain of achievements he has compiled or played a significant part in include the creation of Medicare, the family and medical leave bill, national service legislation, worker retraining laws, freedom of access to abortion clinics, the lifting of the abortion gag rule, women’s health legislation including fetal tissue research, and student loan reform. Ted Kennedy helped create Meals on Wheels for senior citizens. He won greater justice for Native Americans, created a host of programs to combat hunger in the United States and abolished the poll tax. His immigration bill in the 1960s changed the very complexion of America, replacing a black-white divide with a multi-hued diversity of immigrants. He also has a strong history of gun control efforts – including early support for the Brady bill and opposition to the National Rifle Association dating from 1968.

His causes have been large and small and have crossed party lines. Working closely with President George W. Bush, he pushed through the controversial No Child Left Behind law intended to improve standards at public schools. In the 1990s, he and Republican Orrin Hatch cosponsored a bill to give health insurance to nine million uninsured children. Hatch and Kennedy rewrote the country’s sentencing laws, ending parole in the federal prison system. In the 1980s, he and Republican senator Alan Simpson crafted immigration reform together. He and Senator John McCain did it again in the 1990s. He forged a balanced budget bill, helped Ronald Reagan deregulate the airlines and single-handedly blocked the confirmations of two Republican nominees to the Supreme Court, G. Harrold Carswell and Robert Bork.

Some have called him the Imperial Senator, running a kind of shadow government out of the Senate. His involvement in foreign affairs, for example, is little known but broad. It was his activism that pushed the world toward a condemnation of apartheid in South Africa. He is the one who initiated the sanctions that eventually forced the end of second-class citizenship for blacks in that country. New York Times journalist Adam Clymer said Kennedy’s influence “has extended from Vietnam to the Soviet Union, from Bangladesh to Chile, from Biafra to China, from South Africa to Ireland.”

His persistence has kept the Kennedy flame burning long and bright enough to hand the torch off to Barack Obama. “I would not be sitting here as a presidential candidate had it not been for some of the battles that Ted Kennedy has fought,” Obama said in one of his campaign speeches. “I stand on his shoulders.” More than anything, the sanctity of that torch was the reason Ted Kennedy was so determined to make it to Denver. “He wanted to be here to demonstrate that this was another epic moment in the history of this country, when there was a real passing of the torch to a new generation,” his son Patrick said. After bearing the torch for so long, Ted Kennedy had come to own it, and he wasn’t going to let anyone else pass it along.

Kennedy’s speech at the Democratic convention in 2008 marks the closing of a fascinating chapter in America’s political and cultural life. Many who were there believed they were witnessing the last major address a Kennedy would ever give at a national convention. It also means that, for the first time perhaps, the real measure of the Kennedy legacy can finally be taken. The brothers’ three stories can be seen as essentially one now, each successive brother striving to fulfill the interrupted promise and finish the unfinished life of the brother before.