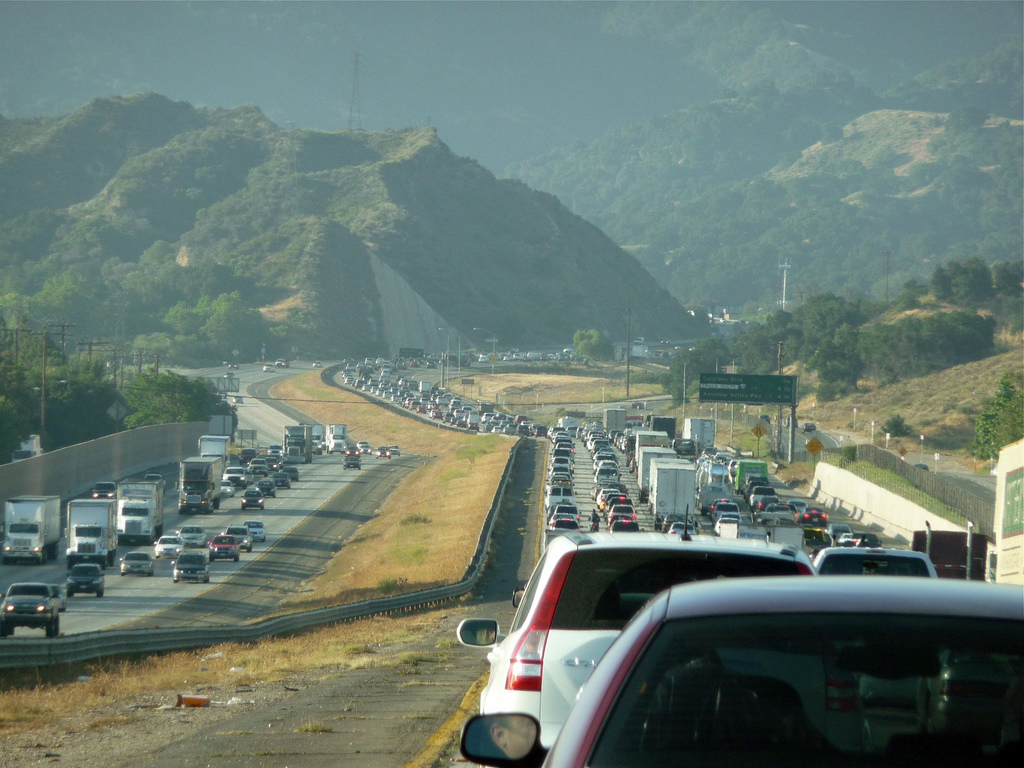 Everyone who has ever waited in line knows intuitively what Tom Vanderbilt shows to be true in Traffic: Why We Drive the Way We Do (and What It Says About Us)

: that unexplained waits seem longer than explained waits. So Traffic – which details, among many other things, how traffic lights are synchronized, why traffic jams develop, and why road rage sparks so easily – may not actually cut your commute time, but at least it’ll seem faster once you learn why you’re stuck. Below, Vanderbilt, who spoke more on the subject at Zócalo, explains how Los Angeles deals with pedestrians, why La Brea and the 405 are always so packed, and how engineers know when there is a jam (and why they sometimes don’t know).

There are, even in Los Angeles, pedestrians. Despite the hilarious scene in L.A. Story that showed Steve Martin driving to his next-door neighbor’s house for dinner, people do walk, and not just to and from their parked car. As a profession, traffic engineering has historically tended to treat pedestrians like little bits of irritating sand gumming up the works of their smoothly humming traffic machines. With a touch of condescending pity, pedestrians are referred to as “vulnerable road users” (even though in the United States many more people die in cars each year, which leads one to wonder who exactly is more vulnerable). Engineers speak of things like “pedestrian impedance” and “pedestrian interference,” which sound like nasty acts but really just refer to the fact that people sometimes have the gall to cross the street on foot, thus doing things like disrupting the “saturation flow rate” of cars turning at an intersection.

As a testament to the inherent bias of the profession, no engineer has ever written a paper about how “vehicular interference” disrupts the saturation flow rates of people trying to cross the street. In cities like New York, despite the fact that pedestrians vastly outnumber cars on a street like Fifth Avenue, traffic signals are timed to help move the fewer cars, not the many pedestrians — has anyone ever had an uninterrupted stroll up Fifth Avenue, a green wave for walking? Unlike in pedestrian-thronged New York City, where most push buttons to cross the street no longer work (even though they still tempt the impatient New Yorker), in Los Angeles the relative rarity of pedestrians means the buttons do work. The walker humbly asks the city’s traffic gods for permission to cross the street, and, after a time, their prayers are answered. If you do not press the button, you will stand there until you’re eventually ticketed for vagrancy.

Sometimes the traffic deities encounter even higher authorities. A curious fact of Los Angeles traffic life is that, at roughly seventy-five signals, in places ranging from Century City to Hancock Park, the button does not always have to be pressed to cross. These intersections run instead on what is known as Sabbath timing. As Sabbath-observant members of the Jewish faith are not supposed to operate machines or electrical devices from sundown on Friday to sundown on Saturday, or during a number of holidays, the act of pressing a button to cross the street is viewed as a violation of this tenet. With the only alternative rampant jaywalking, the city installed automated “Walk” signs at certain intersections (causing what [city transportation head John] Fisher jokingly calls “sacrificial interruptions” to traffic flow even when no pedestrians are present)….

These nuances pale before the overwhelming fact that Los Angeles is handling more traffic now than was ever thought possible. “A lot of major streets, like La Cienega and La Brea, carry sixty thousand vehicles a day,” says Fisher. “Those streets were designed to carry thirty thousand vehicles a day.” Years ago, engineers used capacity-expanding tricks like reversible lanes on Wilshire Boulevard and other major thoroughfares, changing the normal direction of one lane to help carry traffic in from the freeway in the morning and send it back out in the evening. That is no longer possible. “When you’re getting a split like sixty-five percent of traffic one way, thirty-five percent the other way, reversible lanes work very well,” Fisher says. “Today we rarely have that type of peaking anywhere in the city.” The highways are no different. The San Diego freeway, or I-405, was projected to carry 160,000 vehicles when it was completed at the end of the 1960s. It now carries almost 400,000 per day, and the junction where it connects to the Santa Monica Freeway is the most congested in the United States….

The thing that keeps the whole system from breaking down is precisely that advantage that humans have over ants: the ability to see, and direct, the whole traffic system at once. By making all these decisions for the drivers, by coordinating the complex ballet of wants and needs, supply and demand at intersections, engineers have been able to improve the city’s traffic flow. A study a few years ago by the DOT showed that the area containing real-time traffic signals reduced travel times by nearly 13 percent, increased travel speeds by 12 percent, reduced delay by 21 percent, and cut the number of stops by 31 percent. Just by quickly alerting the DOT that signals have malfunctioned, the system squeezes out more efficiency. What the traffic engineers have done is added “virtual” capacity to a city that cannot add any more lanes to its streets.

The flow of information is crucial to maintaining the flow of traffic. With no spare capacity, irregularities in the system need to be diagnosed and addressed as soon as possible. Engineers at Caltrans say that as a rule of thumb, for every one minute a highway lane is blocked, an additional four to five minutes of delay are generated. The inductor loops buried in the highway can and do detect changes in the traffic patterns. But the highway loops are not in real time. There can be a gap of anywhere from a few minutes to a quarter of an hour before the information they’re recording is processed. Often, visual confirmation by camera is needed to verify that there is a problem. In that time, a huge jam could develop. Or sometimes the loops in a particular section of highway are not working (Caltrans reports anywhere from 65 to 75 percent of its twenty-eight thousand statewide loops are working on a given day) or a section of highway will have no loops at all.

This is why, each day in Los Angeles, there is a frantic search for the truth. It’s called the traffic report.