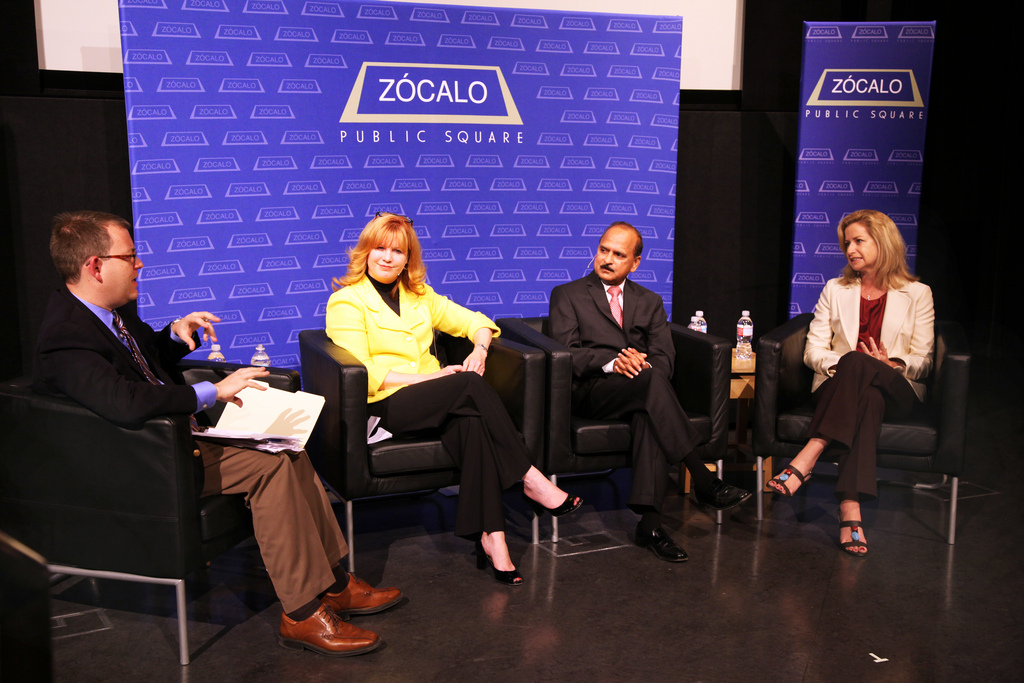 With flu shots hard to find in New Jersey, Charles Ornstein decided to get one in Los Angeles.

It wasn’t the only reason he was in town, of course. Ornstein, a ProPublica senior reporter who covers healthcare, traveled to Los Angeles to discuss retail clinics at the National Center for the Preservation of Democracy, and so decided to stop by one for a vaccination.

“Nobody was waiting. I got my shot and I got out in five minutes,” Ornstein said.

At an event sponsored by the California HealthCare Foundation, Ornstein joined Cynthia Stamper Graff, President and CEO of Lindora, Inc.; Mary Kate Scott, a professor of health care business and consulting at USC; and Dev Gnanadev, chief medical officer at Arrowhead Regional Medical Center to discuss what the retail clinic – and the concept of quick, bite-sized care – means for patients, doctors, and the broader healthcare debate.

The Southwest Airlines of medicine 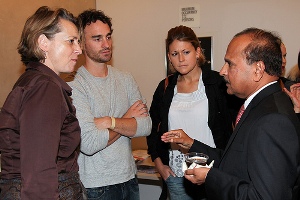 Four years ago, Ornstein noted, there were about 17 retail clinics in the country, and today there are between 1,100 and 1,500, with 60 to 80 in California, relatively few because, the panelists said, of the state’s high cost of doing business.

As Scott explained, the retail clinic is a bit like the Southwest Airlines of medicine: it strips out some aspects of service in order to provide a basic service more efficiently. Clinics set up shop in grocery stores, drugstores, and merchants like Target and WalMart. They tend to be staffed by either a physician or a nurse practitioner, to keep longer hours, and to accept a flat cash fee rather than insurance – usually about $60 in California, the panelists noted. Retail clinics rely on electronic record keeping to provide quick service for certain ailments that can be treated on a one-time or occasional basis: colds, coughs, vaccinations, ear infections, and so on. Some are  more integrated with doctors’ offices and hospitals than others, providing for more streamlined referrals and continuity of care, while others are purely episodic.

Retail clinics, Scott argued, are an apt response at a time when healthcare costs are rising without an increase in quality, when more people are uninsured or underinsured, and when doctors’ offices and hospitals are overburdened. Graff, whose company owns eight retail clinics and launched decades ago to provide weight-loss treatment, noted that her company strives for such convenience and for high quality precisely because patients are paying out-of-pocket and could pick up and go elsewhere, including back to their doctors. “It was the concept of getting closer to patients, and actually having access to even more people,” she said, that drove her company.

Soccer moms vs. the uninsured

The people Graff sees vary from region to region in California, and in Los Angeles, she noted, they tend to be travelers seeking quick care while on vacation. Her other patients are the uninsured, and, to her surprise, school volunteers who need TB screenings and other vaccinations. 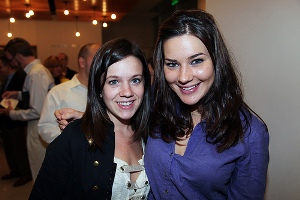 Gnanadev argued that retail clinics don’t necessarily serve the population most in need of care in the face of rising costs, those who cannot afford $60 when Medicaid reimburses at an average rate of $24 for a doctor’s visit. At Gnanadev’s hospital, Ornstein noted, 38% of patients have no insurance, 55% are on MediCal or Medicaid, 10% rely on Medicare, leaving only 7% who are covered by private health insurance. Scott admitted that, indeed, 62% of retail clinic patients are the “soccer-mom” variety: they have insurance. For the rest, the retail clinic is a strong safety net, and it reduces the hours of missed work. Even the insured, she said, may not have a very strong relationship to a doctor. “Insurance isn’t access. It does not mean you have a primary care doctor,” she said. But Gnanadev feared about taking insured patients away from doctors, too, which means less funds to subsidize the uninsured.

Gnanadev also argued that one of the goals of healthcare should be to make sure every American has a primary care doctor, and unless retail clinics are properly integrated with doctors’ offices, he said, they detract from that goal. He did admit, however, that doctors’ offices can be difficult to get into, but he noted that many are modernizing and focusing on consumer-oriented care as well.

Another worry of Gnanadev’s was who owns retail clinics. “CVS or Walgreens owning [a retail clinic] – it just worries me,” he said, citing that their motive must be simple profit, rather than clinics owned by healthcare providers and integrated with doctors and specialists. “Already we have for-profit insurance companies controlling healthcare.” CVS, Ornstein noted, is the largest operator of retail clinics, paying 156 million to acquire the Minute Clinics. 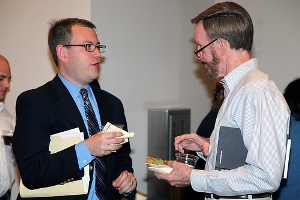 But Scott argued that drug store motives don’t compromise care, and in some cases, can make for better care. Retail clinics are 70% corporate-owned, she noted, 25% are owned by hospitals or healthcare systems, and 5% are independent. Retailers, she said, are interested because they want to sell prescriptions, increase store traffic, and stay relevant to consumers, who can get anything they can get a drugstore at either a Vons or Target or Costco. The nurse-practitioners who run clinics, she said, have very strict licensing procedures that can make them less likely, say, to write unneeded prescriptions. “You can cajole a doctor,” Scott said, “but a nurse-practitioner has a tight authority.” Ultimately, clinics’ focus on efficiency, she said, answers a patient demand.

Scott added that non-corporate owners have different motives: hospital systems want to keep patients in network, lower the costs of delivery, and be present in the community. Gnanadev noted that his hospital doesn’t open clinics because of licensing requirements, and because they’ve managed to vastly reduce ER waits within the hospital system, despite serving 400 patients a day in the busiest ER after L.A. County-USC. He added that his hospital does work with nonprofits to provide clinic care while still having a support structure to deal with cancer, hypertension, stroke and other serious problems that may come up.

Independent owners, Scott said, are “built to be sold, and many have been sold.” Graff, among the independent owners, noted that her company does refer patients to doctors and specialists, and provides copies of electronic records to patients and doctors.

Ornstein said that retail clinics are moving beyond quick care for colds, moving into caring for asthma, osteoporosis, and even offering Botox and preventive care. Scott added acne, weight loss, and smoking prevention to the list, while Gnanadev joked that at least botox has high margins, a boon for profit-driven clinics. Graff noted that she’s seeing an increasing number of male patients. “It’s non-threatening. It doesn’t seem like a big deal,” she said. “I think there will be more screening and more preventive care.”

While Gnanadev appreciated offering more preventive care, he, and a member of the audience during Q&A, noted that doctors don’t necessarily accept clinic results, instead running tests again, and sometimes recommending different treatment. Still, another audience member and Graff argued, those screenings that do catch something, and that doctors confirm, are an added value. Gnanadev also worried that the clinics distract from healthcare reform, while Scott and Graff believed it moved healthcare reform forward by creating easier access and lower costs where possible.

As for the fate of the doctor’s office, Gnanadev wasn’t worried. And Scott saw it more as a question of what the doctor’s office is for, and how technology and consumer knowledge have always transformed that purpose. “When my mom took a pregnancy test, she went to the doctor, and then she went back for the result. Now 40 million tests are done in America per year. That would be 80 million visits,” she said. Rather than take up a doctor’s time, Scott said, consumers are getting smarter about their healthcare, and what they can manage alone: “We prefer to pee on a stick, sorry to be crass.” 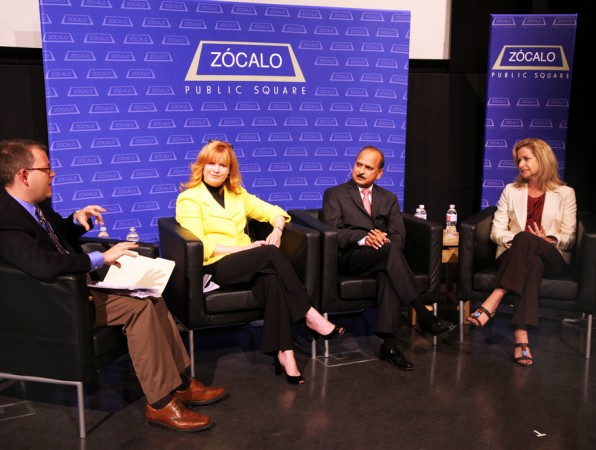