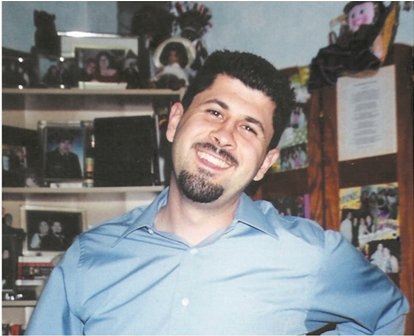 Agustin Roberto “Bobby” Salcedo, an assistant principal and school board member in El Monte, California, was shot to death last week while spending the holidays in Mexico. As his family, his friends, and his city honor his memory, Michael Jaime-Becerra, an El Monte native who explores the city in his fiction, pays tribute to his long-time friend.

On New Year’s Day my wife and I were driving to my parents’ home for our annual tradition of menudo breakfast when my sister called with the news of Bobby Salcedo’s death. She related the preliminary details – Bobby kidnapped at gunpoint from a restaurant, that he was in Gomez Palacio, Durango visiting his wife’s family for the holidays, that his body was found the following morning with those of the five other abducted men. I was shocked as I made the turns toward home and horrified as I drove past the Salcedo house. Their driveway was crowded with vehicles, and I recognized this as the first indicator that the tragic news was true.

The Salcedos live around the corner from my parents and a major portion of my childhood was spent with Bobby, his brothers, and their neighbor. We mostly played basketball in each others’ driveways. The Salcedo driveway was narrow and long, epic shots flung from the sidewalk, a low brick wall along the right sideline that tore up your knees if you weren’t careful. All sports at the Salcedos were typically rough. One brother would pound you like Charles Barkley until he scored, and another was nicknamed “Chueck,” a version of “chueco,” as “crooked” was the best way to describe his unorthodox moves driving the ball toward the basket. Their neighbor was quick and agile. I recall that he also played tennis. At this point, Bobby was old enough to get in the mix if he didn’t feel like sitting out with his younger brother. Bobby wasn’t particularly good, but he always seemed to have fun talking smack as we played. This was how a number of my summers passed. Eventually we all got older, and our paths diverged as the brothers found a passion for hockey and I traded out Oingo Boingo for the darker thrill of punk rock. Soon we graduated from different high schools. Then we went to college and our paths diverged some more.

But I never lost sight of Bobby or his family. His sister became a teacher at the elementary school where my mother was a clerk, and around this time I recall hearing that Bobby had started working as a cashier at the dairy on Durfee Avenue. I remember hearing from one of the brothers that he had been held up at night, but that he needed to continue working to put himself through school. Each Fourth of July my sister and I bought our fireworks from the stand where Bobby would be volunteering, following him from the 7-Eleven parking lot on one end of Durfee when he began teaching at South El Monte High School to the Big D’s parking lot at the other end of Durfee when he became Assistant Principal of Instruction at Mountain View High School. This past spring Bobby invited me to speak to an assembly of his students at Mountain View about my writing, which is set in the El Monte of our adolescence. I was happy to do so, honored really, for I knew that we were of a similar spirit when it came to our hometown. In fact, Bobby’s love for our city and the pride he had in its community were only surpassed by the optimism that he had for its young people.

Call me biased, but as I write about Bobby I find myself reluctant to call him “promising” as some news reports have. To call him “promising” suggests that he had yet to accomplish much, if anything, when in reality Bobby had long ago dedicated his life to the service of others. His record of toy drives and international fundraising and other seemingly endless charity work dating back nearly two decades is both inspiring and humbling. And the commitment to education – history teacher, assistant principal, elected school board member – is undeniable. At the outset of his thirties he was overseeing his former teachers and administering structural changes to improve the classroom experience for the students in their charge. Police helicopters don’t fly in a salutary formation for people who are only promising. Thousands of people don’t sit in vigil in a chilly football stadium for someone who is only promising. Bobby was tremendously accomplished and, more importantly, he used his accomplishments to make a difference in the lives of the people around him. It seems to me that he somehow fit a lifetime of achievement into the short span of time that he was here.

Despite the manner of Bobby’s death, I also refuse to associate him with the drug traffickers rampant in the region of Mexico where he was killed. In my opinion, Bobby and the Salcedo family represent the absolute best of El Monte. They also represent the best of the immigrant American experience. It is truly remarkable for any family to go, in the span of one generation, from parents with grade-school educations to all five children earning college degrees, some continuing on to master’s degrees. At the time of Bobby’s death, he was only a few courses away from a doctorate in educational leadership. When I visited him at Mountain View last May, his office was decorated with images of Cesar Chavez. His email signature quoted education reformer Horace Mann. Bobby struck me as someone possessed of a vision beyond the material. I continue to understand him as someone with the intelligence, work ethic, focus, and sheer will to achieve whatever goal he envisioned for himself.

While so many things made Bobby’s life spectacular, I am not forgetting those qualities about him that I see in so many other people. He loved the Dodgers, even in the leanest of years, and he loved the UCLA Bruins, even in the face of cross-town juggernaut USC. He was loving and supportive to his family, both here and in Mexico. He was a husband. A brother. A son. In these ways he was just like you or me, and his murder has left me with a profound sense of interconnectedness. The events of foreign drug wars and gangland executions no longer seem isolated to passing news clips. They are not fleeting glimpses at another world. I cannot shake the impression that Bobby’s death could have happened to anyone in the wrong place at the wrong time, and I am steadfast in my belief that such violence is unacceptable. I will be writing my elected officials, informing them about Bobby and demanding that they do all in their power to bring closure to his family, and to the community grieving his loss. If you recognize yourself or your loved ones in the story of Bobby’s life, I encourage you to tell others about him as well.