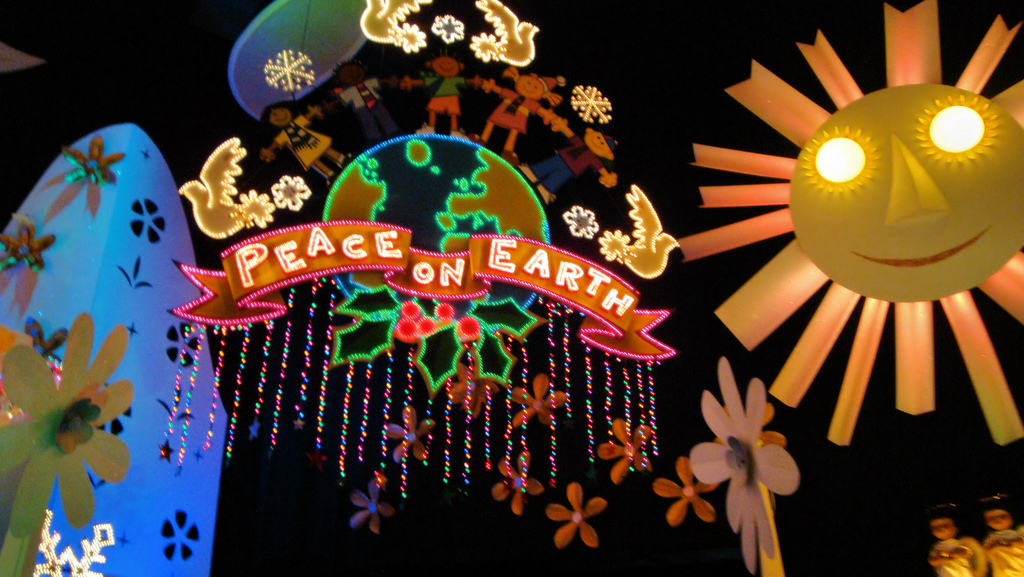 More than 100 years after the first World’s Fair in 1851, the 1964/1965 New York World’s Fair opened on April 22, 1964. Like its predecessors, the fair, masterminded by planner Robert Moses, showed off the latest technological innovations. And appropriately for its time, the fair boosted for world peace and cross-cultural acceptance, debuting none other than Disneyland’s “It’s a Small World” attraction. But the fair’s ambitions may have been too high. Below, from an article in American Heritage magazine, John Steele Gordon explains how the event turned into something of a disaster.

It had no fewer than three official themes, the remarkably clunky “Man’s Achievements on a Shrinking Globe in an Expanding Universe,” the less than original “Peace Through Understanding,” and the more or less meaningless “A Millennium of Progress.” Its symbol was the Unisphere, which still can be seen at Flushing Meadows Park, where the fair was held. It wasn’t even an official world’s fair, and most major countries boycotted it. It was a financial disaster.

Officially, the New York World’s Fair of 1964 and 1965 celebrated the 300th anniversary of the British capture of New York from the Dutch in 1664. Unofficially, it celebrated the 25th anniversary of the fondly remembered 1939-40 New York World’s Fair, which had featured the Futurama exhibit by General Motors, Billy Rose’s Aquacade, and the parachute jump that was later moved to Coney Island. The 1939-40 fair had ostensibly celebrated the 150th anniversary of the inauguration of George Washington as President in 1789. That was a good excuse, but the real reason was to get rid of a gigantic eyesore in the heart of the borough of Queens, the Corona Dumps. By making the dump the site of the World’s Fair, it was reasoned, New York City could use the profits to create a park after it closed. Unfortunately the fair lost money and was able to pay back only about 33 percent of what had been invested in it. The park remained unfinished.

The prime mover behind the 1939-40 World’s Fair, Robert Moses, the city parks commissioner, decided to try again. A gifted executive (and a born bureaucrat, with a genius for gaining control of the levers of power), Moses was also imperious and prickly about public relations. The corporation formed to run the fair (headed by Moses at a salary of $100,000, at a time when New York’s mayor earned $40,000) issued $35 million in six percent bonds, and New York City gave the fair $24 million for park improvements. Both sums were to be paid back out of profits. To ensure those profits, it was decided to charge rent for exhibition space and to run the fair for two years.

These decisions violated the rules of the Bureau of International Exhibitions, headquartered in Paris. Moses went to Paris and asked the BIE to sanction the New York fair anyway. When it wouldn’t, he went to the press and bad-mouthed the BIE. In retaliation, the bureau wrote its member states (most large nations, although not the United States) and asked that they not participate.

As a result there were only 36 foreign pavilions at the “world’s” fair, most of them hosted by small nations. One of the smallest nations, however, Vatican City, cut no corners and sent over Michelangelo’s Pietà, the only time the priceless statue has ever left Italy. To fill the gap, many American states agreed to participate. The Wisconsin Pavilion featured – what else? – the “world’s largest cheese.”
The backbone of the fair, however, were the exhibits of American corporations, with General Motors creating a new Futurama, this one predicting the world of 2064, AT&T demonstrated a “Picturephone,” a long-anticipated technology that never caught on. The surprise hit of the fair was at the Beigian Village Pavilion, where Belgian waffles were introduced to what turned out to be a highly receptive American audience.

Robert Moses would not allow the amusement area to have any of the honky-tonk, sideshow atmosphere (Norman Bel Geddes’s nude Crystal Gazing Palace, for instance) that had proved so popular at the 1939 fair. As a result it had little public appeal, and its major shows closed early with heavy losses.

The success of the exhibition was predicated on the attendance of 70 million people. But the reviews in the press, hostile to Robert Moses, were mostly negative and by the close of the 1964 season only 27 million had come to the fair. This was very bad news, indeed, and worse immediately followed. The fair had taken in much money in advance ticket sales for both the 1964 and 1965 seasons. But through a gross accounting error, these revenues were counted as income only for 1964. This gave the illusion of plenty of money on hand, and the fair spent freely.

Finally it dawned on the fair corporation and the press that there would be little money in the till to cover 1965 operating expenses. By borrowing from the city and raising ticket prices, the fair avoided the supreme embarrassment of bankruptcy. A last-minute surge in attendance (which totaled 52 million over the two seasons) in the final weeks of the fair also helped stave off absolute disaster. But the fair was unable to repay its bondholders or the city.

Many earlier American world’s fairs, such as the Philadelphia Centennial Exhibition in 1876, the Chicago Columbian Exposition of 1893, and even the New York fair of 1939-40, won a permanent place in the American folk memory. The 1964-65 fair has been largely forgotten, except perhaps as a prime example of what went wrong with New York City in the 1960s and 1970s.