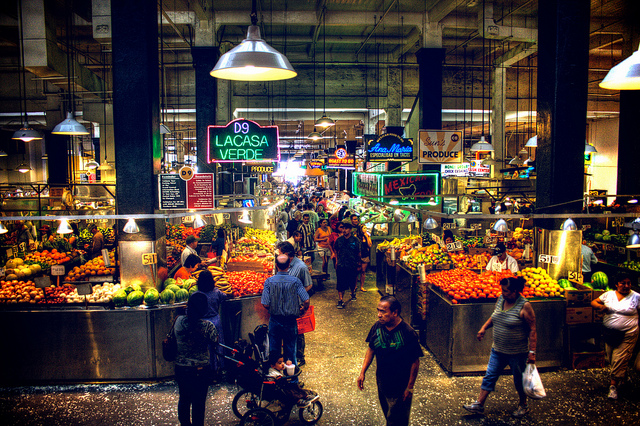 For our Voyage Home feature, Zócalo will invite contributors to write about going home, wherever or whatever that may be. Below, on the occasion of the Mexican Bicentennial, Andrés Martinez reflects on having two homes without ever feeling fully at ease in either, except perhaps in that city that managed to combine his two cultures.

Mariachi music and the Potomac River don’t often find themselves in the same sentence, but Mexico turned 200 overnight, so an exception had to be made. Mariachi music did indeed waft over the Potomac, emanating from the Grito celebration on the esplanade of the Kennedy Center. Ozomatli played, fireworks ensued, naturally, and thousands of melancholic Mexicans toasted 200 years of independence from the old empire in the capital of the empire many of them feel replaced it.

Ok, I am projecting when I assert the crowd was melancholic. There were some boisterous “Viva Mexico” cries, some laughter, some tequila. But two emotions ruled my evening, neither of them particularly light.

First, to the extent that Mexico is besieged by violence bred by the drug trade, this bicentennial feels like a birthday for an elderly and ailing relative. We might have been carrying on in Washington, but security concerns tempered public festivities in many Mexican cities.

How different this felt from that other North American bicentennial 34 years ago, when Americans – despite a post-Vietnam/costly-oil/disastrous-fashion malaise – exhaled triumphantly. One of the distinguishing hallmarks of Americans is that looking back invariably inspires us to look forward with replenished optimism. When Mexicans look back, we don’t often return, not even to the present. The past is sticky and unresolved – all-consuming. If Manifest Destiny remains the mindset north of the Rio Grande, Manifest Fatalism pervades to the south.

Notice the confusing proliferation of “we” in the above paragraphs, which brings me to my second roadblock to a joyous bicentennial: that familiar feeling of exile.

Having two homes is in many ways a blessing. But much of my life has also involved swapping one form of exile for another. Don’t be fooled by the map: my two homes are far, far, apart, and very difficult to bridge. We remain, as Alan Riding’s book title aptly put it a quarter-century ago, “Distant Neighbors.”

I remember that other American bicentennial, the so-called Spirit of ’76. I can picture myself – so suave at 10 with my braces, helmet haircut and tan leisure suit – strolling down Fifth Avenue with an expansive “This ain’t Chihuahua” grin. Or, to be more precise, make that a “¡This ain’t Chihuahua, cabrón!” grin.

Thanks to my gringa mother’s conviction that this – of all years – was the time for her kids to get to know their other country, we’d made our first foray from Chihuahua to the East Coast, inhaling Boston, New York and Washington the way (sorry but I’m still going with “we”) Americans do Europe. It was in the Big Apple that I felt oddly at home, and announced to the world – or to mom, at least – “This where I am going to live when I grow up.”

I wasn’t raised to hyphenate, or synthesize my Mexicanidad with my Americanness. I mastered both separately, undiluted, teeing up a choice. (Actually, Mexican law teed up the choice for me, since it barred dual nationality past the age of 18.) I always ate fiery, dousing spice with lime whenever possible not only because it is the Mexican way, but because I was so spooked by those descriptions of scurvy in “Mutiny on the Bounty.” I spoke with a norteño accent renowned throughout the Spanish-speaking world as the tenor of Pancho Villa’s Dorados. It’s that hyper-Mexican accent that makes people elsewhere in the world expect you to start a revolution, or at least sing a corrido about your horse.

I was also the güero obsessed with learning U.S. history, literature and politics. I was the kid in class who had no one to talk to about Holden Caulfield because no one else had read the book, or about how Americans could venerate someone like Robert E. Lee, who’d apparently managed to kill far more gringos than any Mexican general ever had. I couldn’t wait to go off to Exeter, Yale, and The New York Times, unaware that I’d only be swapping one exile for another.

But Los Angeles disturbs my ruminations about here versus there, about these distinctive, self-contained spaces separated by a fixed line running through my consciousness, as it does on the map. Los Angeles straddles my two worlds.

My three-year stint there had a sepia-tinted, surreal quality. My L.A. was a bit of a dreamscape, like the creations of Ellen Page’s character in “Inception,” the “dream architect” empowered to take certain liberties in designing a dream’s backdrop. You don’t have to have seen the movie to know what I am talking about – the way that dreams have of condensing things across time and spatial planes. Suddenly your spouse makes an appearance in your sixth-grade class, or your childhood house is across the street from your workplace.

My L.A. was like that. I was working downtown alongside such icons of American journalism as John Carroll and Mike Kinsley. But I could cross Broadway and moments later find myself in the Central Market, counting the number of Toluca and Cruz Azul caps, savoring the arid sweetness of a crumbling polvorón, grumbling to myself that U.S. sanitary laws seem to limit just how flavorful tacos al pastor can be.

Some of my colleagues who’d moved from the East Coast felt like expats in California, but for me Los Angeles offered the promise of hyphenation without dilution – an end to exile. If nothing else, I was surrounded by many others struggling to accommodate two worlds. At my first meeting with Antonio Villaraigosa, he told me he was scrambling to learn Spanish, which he’d not been encouraged to master as a kid.   It is a recent reckoning for all of us, with the notion that we can aspire to be both Mexican and American, without falling into some crack in between.

One of my fondest L.A. recollections was the glorious afternoon I took a visiting Moroccan journalist to El Gallo Giro in Huntington Park, a 24-hour temple to my Mexicanidad: a place offering tortas; tacos; a panaderia with those round metal trays and tongs to pick out your conchas and polvorones; and even a remittances window, all under the same roof.

Sitting outside, enjoying his first real tacos, Ahmed laughingly blurted out: “I can’t tell if I am in Mexico or in the U.S.!” Which to me, rather faintly, sounded a lot like, “¡This ain’t exile, cabrón!”

Andrés Martinez, the editorial page editor of the Los Angeles Times from 2004 to 2007, is an associate editor of Zócalo and the director of the Schwartz Fellows Program at the New America Foundation.