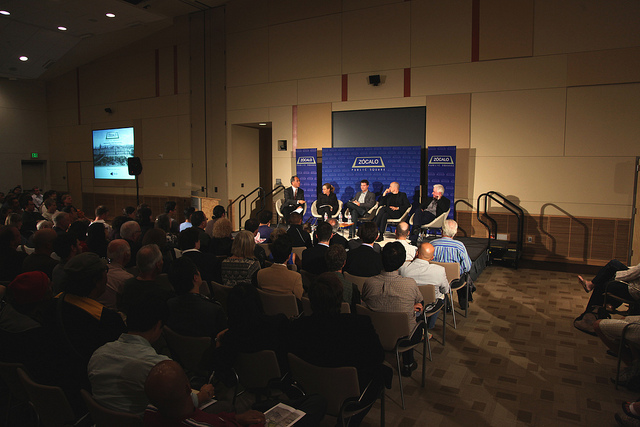 When it comes to public space, the comparison between Paris and Los Angeles isn’t entirely favorable, according to Michael Woo.

“Is it possible to think big in Los Angeles?” asked Woo, the dean of the College of Environmental Design at Cal Poly Pomona. “Is it possible for a public official to survive being tagged as a visionary?”

Woo wondered if it was what he called Los Angeles’ “backyard culture,” emphasizing private space, versus the “front porch” culture of other cities, which encourages the shared use of public space. “Is Los Angeles changing in a way that makes a front porch culture more possible?” Woo asked.

Before a full house at the California Endowment, Woo chatted with Marc Salette of Chee Salette Architecture, Jim Stafford of Perkins+Will, Mia Lehrer of Mia Lehrer + Associates and Michael Maltzan of Michael Maltzan Architecture about their ambitious plan to transform a downtown rail yard into integrated public space, and to transform Los Angeles’ urban culture in the process. 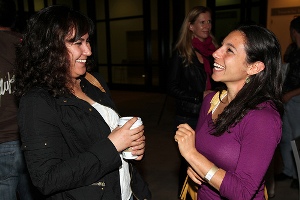 The 125-acre site known as the Piggyback Yards sits between downtown Los Angeles, Lincoln Heights, and Boyle Heights. As Salette explained, the site is bordered by key transit spots or routes – Mission Road, the 5 Freeway, and Union Station – and important civic developments, like the USC Medical Center and the Brewery Arts district. The site is mainly used today for transferring freight from train to trunk. “It’s just a short glimpse seen from the 5 freeway,” Salette said. “It’s the most significant opportunity to provide public access to the Los Angeles River through downtown.”

The panelists’ design collaborative brings together architects and landscape architects, who worked together pro bono for seven months, creating a vision for redeveloping the land. The group took their liberties with the space, expanding to transform about 170 acres, Lehrer said, envisioning development on the other side of Mission Road and the river. Their plan, as presented to all the city, county, and federal agencies involved, “has received near unanimous support,” Salette said.

The design collaborative aims to revitalize the river, create significant public open space, connect adjacent neighborhoods and bridge east and west, and build a diverse community for living, working, learning and playing, Salette said. They propose to restore the river to a natural habitat, replacing the concrete channel with a soft-bottom riverbed, and reintroducing plants and wildlife. The adjacent park would combine areas for relaxing with active areas like playgrounds, soccer fields and community gardens. As Lehrer noted, the collaborative agreed on festival grounds and a small soccer stadium, making the park a regional destination without having to build a hulk of a major stadium.

Next to the park, the collaborative proposed a transformation of the Mission Road corridor, Salette said, into a mixed-use neighborhood, a “new model for the densification of the city.” Buildings would include residential, educational, cultural, commercial, health care and light industrial spaces, and aim to attract diverse residents and visitors. The area would be pedestrian-friendly while welcoming the Gold Line and a possible high speed rail. To the north, the collaborative proposes expanding the arts district and creating a residential tower “with the river as its front yard.” At the center, Salette said, would be a revitalized river that acts as “a bond between communities, between east and west, as opposed to a separating void in the heart of our city.” The project would also double the amount of urban park space in the region, Stafford said. “We’re fifth in the U.S. in terms of amount of parkland that the city has. But it’s all up there in the Santa Monica Mountains.” 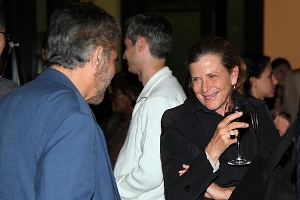 Lehrer agreed with Salette on the river today. “The river has really become a gash,” she said. “It’s not the armature of freeway that hovers above us, but it’s a gash that goes below.” The park, she noted, would function as a flood plain, protecting those nearby from risk. The flooding was one of the many technical challenges of the project, she said – the team also had to consider groundwater, the need to maintain some rail yards, a place to put parking.

The biggest challenge may be the big thinking it demands from many people. “Somehow we suffer from the balkanization of the way our city works,” Lehrer said. “At some point we have to start thinking of the whole.” She credited the city’s younger residents with taking advantage of the public realm without requiring great space. “They don’t need necessarily for things to be fancy. But at some point we do have to create these spaces in the city,” she said.

The site demanded that the architects involved try something new, Maltzan explained: designing buildings that connect spaces rather than serve as singular iconic structures. “It’s a site that has the kind of opportunity for producing a more integrated whole than almost any other site that I know of in the city,” Maltzan said. The collaborative’s proposal takes the notion of a multiuse building to heart, integrating all uses across the levels of a building rather than, say, restricting retail to one floor, Maltzan said. It would collapse commutes for work, shopping and recreation. He said, “If we’re going to imagine the way that Los Angeles can continue to emerge as a progressive city, I think it needs to move from the idea of a monoculture to a multiculture.”

The buildings would act as “thresholds,” as Maltzan explained. “Usually a building has a front yard and a back yard and they’re completely separate. Here, in a way, there’s a front yard on both sides, and the architect has to find a useful way, a real way of negotiating between those two worlds.”

As Stafford explained, the region is set for a transformation if rapid transit becomes a reality. Right now, he said, few people ever access the river because there is so little access, as it’s surrounded by maintenance and rail yards and prisons. “There’s no connectivity to anything you’d want to go to. That has to change for the river to become a viable element of the city,” Stafford said. He noted that if the river were a destination, a place “you want to swim in, boat in, catch fish in,” it would transform the city.

Woo noted that new transportation infrastructure often divides rather than unites cities. Stafford agreed that the physical railroad would be a divider, “but there are lots of ways to get under it or go over it.” And as long as the river area is a place people want to stop, then it’s not just a place to pass through. 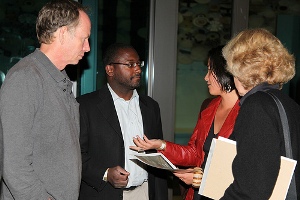 Asked during Q&A whether their proposal would spur gentrification and displacement in the communities near Piggyback Yards, the panelists noted that there are strategies to maintain diversity and allow current residents to remain. As Salette explained, the collaborative assumed that the land would be sold to the government, with only parts of it going to private developers. The public land would have very specific rules about the development of housing. “That’s artificial and necessary,” he said. As Lehrer added, many building developments aim to house mixed income levels, including some that her firm is working on. Woo said that “there is no substitute for the city having a strong inclusionary housing requirement.” And Stafford added that other Los Angeles neighborhoods that have gentrified have generally been composed of single family homes that lacked such a requirement, whereas that rules can be built in to a new development.

And as Maltzan noted, implicit in the question about gentrification “is a very real fear for this city – that the city is densifying and the city is continuing to grow,” he said. “It’s going to put those kinds of pressures on all sorts of communities.” But Maltzan said that increasing density and urbanization is also hopeful – rebuilding a core requires more integration, more involvement from different communities. The project, he said, “is trying to understand the diversity that already exists on the site, and to take that as the starting point. It doesn’t mean we’re going to achieve a kind of nirvana.”

Nirvana or no, the panelists were optimistic. They noted that their efforts so far were something like “guerrilla planning” – initiated by an active nonprofit, rather than by a large development client pulling together a design team. “From here to reality, to Union Pacific wanting to sell the property,” Lehrer said, “there are challenges, but we like to think on the optimistic side. It has been received with open arms by many who are in positions of power.” 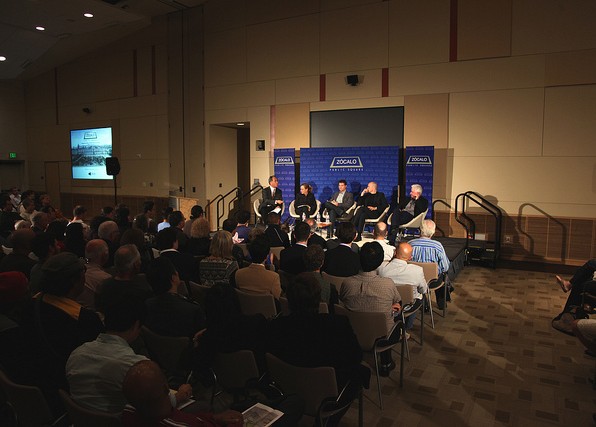