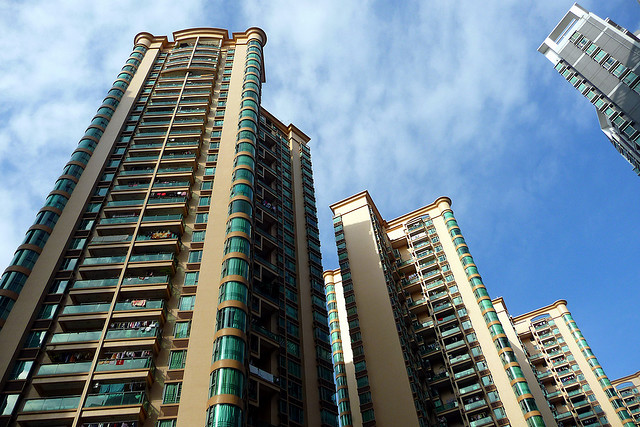 Yang Xiao, a thirtysomething Chinese newspaper journalist, lives in one of the new high-rise developments on the outskirts of Beijing. Built six or seven years ago, the forty-story building complex is home to around 2,000 families – mostly young couples, some with children. A sign outside the front gate proclaims the imperial-tinged name of the complex, “Rome.” The exterior architectural details are a mix of Chinese megablock style and “Old European” flourishes. The main entranceway, for instance, features a two-lane driveway passing under sandstone-colored arches, while the exteriors are adorned with decorative column-and-arch facades and what appear to be wrought iron balconies. Each vestibule boasts high ceilings and chandeliers.

Yang’s home has two bedrooms (one for him and his wife, and one for his mother when she stays over), a study, a living-room area, a tiny kitchen that is tight for two people to stand in at one time, a small laundry room, a bathroom, and a basement. It has faux-wood floors and Ikea bookshelves in the study. Everywhere else the furniture is rather ornate, from the rococo bedroom set to the living area with its exaggerated versions of Louis XIV-era dining chairs, with oval backs and plush gold embroidered cushions that match those on the couch.

The furniture is, in reality, all very cheap, Yang confides, when I stopped by for a party.  A half-dozen or so of us assembled in the gold chairs and on the couch, pulled up a small plastic rubbish bin, and ate watermelon, tossing the rinds in the bin. Together we watched the “Sex and the City” movie on a bootleg DVD (it wasn’t legally released in Chinese theaters). The party was a “fruit party,” because neither Yang nor his wife cooks – ever. They eat out every night.

The consumer habits of China’s 430-million-strong middle class, as the above scene suggests, are ever evolving and continually surprising to foreign observers. For starters, Western ideas of what “goes together” don’t apply: Old European architecture is reincarnated in forty-floor high-rises. You can sit on an overstuffed copy of a Sun King dining chair and spit watermelon seeds into a cheap plastic bin. Everyone looks the other way at mundane contraband, like bootleg DVDs. On the one hand, there is in China a love of ceremony and ostentation and obsession with brands that would embarrass many Westerners; on the other hand, the lure of a good deal and the desire to support the businesses of relatives still trumps most else. Yang’s home is far roomier than his parents’ cramped abode off one of downtown Beijing’s hutongs, the centuries-old alleyways unique to the Chinese capital.  Still, Yang’s apartment would be considered a mouse hole by the standards of most Americans living anywhere outside of New York City. While much has been made of China’s growing wealth, the average per capita income in Beijing, about $10,000, is still several multiples less than that in Tokyo or New York ($41,300 and $73,000, respectively). And in other Chinese cities, like the western megalopolis of Chongqing, it’s only about $3,300.

Understanding what Chinese people will buy is not only a question of culture. It’s now a growing preoccupation of international business leaders and the Washington diplomats and policy wonks who are responsible for setting trade and currency policies. Agricultural forecasters were shocked this year when China imported corn – 1.2 million metric tons of it – from the U.S. for the first time in fifteen years. And it isn’t simply a matter of wanting to sell more iPods and cars. Many mainstream economists believe China is now leading the world out of global recession with its spending habits. All this, of course, goes hand in hand with the concern of environmentalists, who wonder what impact China’s increased consumption will have on the planet and its atmosphere. (Total energy consumption in China, for instance, is expected to double by 2030.)

Oxford professor Karl Gerth’s new book, As China Goes, So Goes the World: How Chinese Consumers Are Transforming Everything, is a helpful guide to making sense of China’s rising consumer culture.    As always with all things China, the statistics are eye-popping:  “From just fifty companies manufacturing soap and shampoo in the late 1970s, the growing personal grooming industry now includes some four thousand cosmetics companies and six hundred beauty-related professional training institutes.” Indeed, as Gerth reports, spending on cosmetics has ballooned from $24 million in 1982 to $168 billion in 2009.  The beauty industry is now the fifth-largest slice of China’s consumer economy, after real estate, automobiles, tourism, and IT. This is especially remarkable because not so long ago makeup, skin creams, and hair salons were not only beyond reach, but also scorned as vices of the Western “bourgeoisie.” All that has changed, and today Mary Kay Cosmetics is among the most ubiquitous and successful American brands in China.

What’s happening in China today isn’t inevitable, but rather the result of specific government policies. As Politburo member Li Keqiang said in 2008, China’s leaders now believe that “boosting domestic demand is essential for propping up growth.” In the parlance of economists, China needs to “rebalance” its economy so it’s not so dependent on the appetite of Western consumers for goods made in China. Thus, in a country with a historically high household savings rate, cultivating shoppers is now a Communist Party priority.

Today, more cars are purchased in China than anywhere else in the world. When an epic sixty-mile traffic jam occurred on the outskirts of Beijing in September, making international headlines, some Chinese newspapers predicted, not entirely tongue in cheek, that due to congestion it will soon be faster to travel by bicycle in Beijing. Given this current reality, it is especially entertaining to discover, as Gerth’s diligent perusal of old Chinese textbooks brings to light, that as late as the mid-1990s Chinese schoolchildren were explicitly taught that American car culture was “unsafe, polluting, and wasteful of natural resources.”

Yang Xiao must not have been paying much attention back then. After his fruit party, several of us packed into two cars to drive downtown to a small Sichuan restaurant in Beijing’s historic Dong Cheng district. Dining opportunities are limited in the high-rise suburbs, which means residents must use a car to go out to eat. Yang’s wife drove, winding her way with astounding calm through the narrow, cluttered hutongs. Several times, we barely missed colliding with opening front doors and slow-moving vegetable carts. At last, we had to stop when we came upon an unoccupied police car parked sidelong across an alley. Unfazed, Yang hopped out of the car, still clutching his wife’s pink handbag without visible embarrassment. After signaling to his wife to move a few inches back, Yang turned his attention to the police car, rolling it forward just enough to let us pass. We were on our way.

Christina Larson is a Schwartz Fellow at the New America Foundation and a contributing editor at Foreign Policy magazine. This article is adapted with permission of The Washington Monthly.