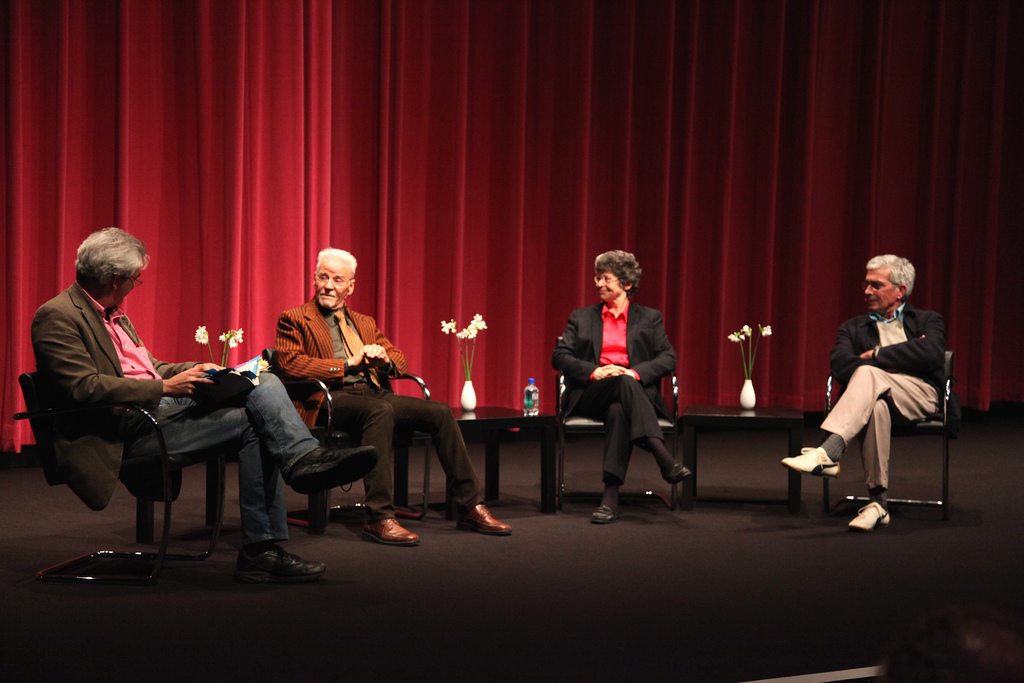 Despite living for years with Christopher Isherwood, Don Bachardy never once peeked at his diaries.

“We agreed that we mustn’t give each other access to our diaries because we become self-conscious,” said Bachardy, a painter and Isherwood’s lifelong partner, who started keeping his own diary at Isherwood’s suggestion.

Bachardy only began to read the diaries the night Isherwood died. He took three months, reading from most recent to oldest, and had only one regret.

“I was very sorry that it never occurred to me that if I didn’t share them with him while he was alive, he would never read them,” he said.

On the heels of the publication of Isherwood’s The Sixties: Diaries, Bachardy joined moderator David Kipen, Huntington Library curator of manuscripts Sara Hodson, and painter Peter Alexander at the Hammer Museum to remember Isherwood’s life in Los Angeles, his legacy, and his words.

Bachardy met Isherwood on the beach in Santa Monica when he was 18, and Isherwood was 48.

“Talk about one of the great unmounted plaques in Los Angeles,” Kipen joked.

Their anniversary was Valentine’s Day not because they met that day, Bachardy clarified, but because it was the first night they spent together, after having passed a day at the beach, dinner, and a party with Bachardy’s brother, Ted. It was Ted who first began taking Bachardy in 1948 via streetcar ride from Atwater to Will Rogers State Beach. (“Well, why? Because that was the queer beach,” Bachardy said in Q&A.) Ted drove the three of them to Isherwood’s home in Brentwood.

“As Chris was getting out, I announced to Ted that I was spending the night with Chris. Chris was surprised too,” Bachardy said. “It was very uncharacteristic of me to be forward. But I said it in somehow perfect confidence.” And, Bachardy added, “I knew Ted was going home with somebody…rather than just be dropped off at my brother’s apartment I decided I’d stay with Chris.” 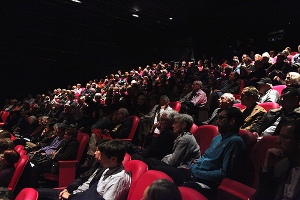 They remained together for decades. Bachardy’s father refused to speak to Isherwood for 15 years, though he watched every TV appearance by the writer, Bachardy said. “After 15 years of that kind of exposure to Chris I guess he decided it was safe to meet him,” Bachardy said, noting his father was a skilled mechanic. “It wasn’t long before he was working on Chris’ car.”

Alexander, who met the couple in the late 1960s, found them a surprising pair. “I had known gay people, but I never knew a couple,” Alexander said. “I thought this is really amazing. I’ve never known anybody to have a relationship like this. It was magnetic. It was so good.”

Bachardy painted several portraits of Isherwood (as he has of Alexander and Hodson, who rapturously described the experience of sitting for him). Isherwood, he said, would sometimes ask him to help describe a character. And, Bachardy said, “I started developing what was an affected British accent. I was just horrified when I first heard my voice on a tape recorder.” Isherwood mimicked mannerisms of Bachardy’s as well. “He liked the idea of having an American accent, and he used all kinds of Americanisms he learned here,” Bachardy said. “He loved this country. He never regretted leaving England.”

Isherwood arrived in the U.S. in 1939, when he emigrated with his friend W.H. Auden, Hodson said. Both were trying to escape the war, and pursue a freer life as gay men. “In England it was still against the law to be gay,” Hodson said. Isherwood came almost immediately to Los Angeles, in part for its freer if not quite open gay community. “It was under-cover. It was like a glamorous criminal world,” Bachardy said. “We had to behave ourselves in public. So then when we got together in our groups – oh, what freedom! That made it fun.” Bachardy noted that while he “just grew up taking it for granted that of course we were illegal,” Isherwood fought for gay rights.

The art world at the time was much the same as the gay world in Los Angeles, Alexander said. “Meaning there were very few artists,” he said. He recalled going to the county museum, then housed with the Natural History Museum: “I remember seeing an exhibit there of a New York painter, Philip Guston. I saw his paintings behind a dinosaur. That was the sensibility of L.A. at the time.” 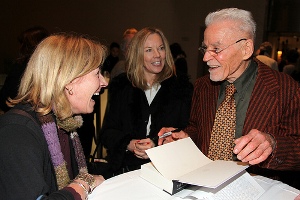 Isherwood also fulfilled in Los Angeles his Vedantic faith which, Bachardy said, “stayed with him until the day he died.” And he was drawn to Hollywood. “In the earlier diaries he talks about going on a picnic with Greta Garbo just a few days after he arrived,” Hodson said. “He’s meeting these figures that were legendary to him. Coming to California opened up this enormous world.”

It didn’t go over well with his old world, Bachardy said. “To the British literary world that was total perdition – moviemaking and Indian mysticism. The British have never really gotten over it.” Critics across the pond claimed Isherwood’s work declined in the U.S., though Isherwood’s A Single Man took place and was written in Los Angeles, and was Isherwood’s favorite of his books.

As Kipen noted, critics have come around to A Single Man, which was initially panned, and quite controversial for its frank story of a gay professor mourning the loss of his younger lover. But as Bachardy pointed out, Isherwood recalled that earlier works of his like Goodbye to Berlin were criticized, too, before they came to be considered classics. Isherwood was a generous critic himself, Kipen said, particularly to Ray Bradbury,  but less so, Bachardy noted, to John Steinbeck for killing off his characters in The Grapes of Wrath. “Chris felt, who was responsible for that if not Steinbeck? He thought he was using pathos for his own purposes.”

The 1960s diaries describe the reception of A Single Man, Isherwood’s love of Los Angeles, and especially his relationship with Bachardy. Isherwood often made direct addresses to him, Bachardy said. “That’s exactly the kind of connection with him that was so helpful to me after he was dead. The diaries were so alive. They were about the two of us. It was his voice that I was hearing. And he knew it.”

Bachardy said that Isherwood was easy on Bachardy in the diaries. “He didn’t like dwelling on the negative aspects of my behavior.” Only one page of the 1960s volume is half torn out because, as Isherwood writes in the following entry, it was mean to Bachardy. “It probably wasn’t mean. It was probably just accurate,” Bachardy said, noting that Isherwood didn’t like evil villains in fiction because it depressed him, unlike the “delicious villains” he enjoyed. “What he thought was the most difficult thing was to write about a saint,” Bachardy explained, like one of Isherwood’s favorite characters, Fyodor Dostoevsky’s Father Zosima.

Hodson, who oversees the Isherwood papers at the Huntington Library, explained that the Library saw Isherwood as “a major 20th century writer in the English language who happened to be gay – not as a gay writer.” Of the collection, she said, “It has legs. It’s going to go on for a long time and reward scholars who come to use it.” She described the Isherwood she came to know through the papers as compassionate, humane, and generous with his time and expertise. Bachardy noted in Q&A that more of the papers will be published soon, including his correspondence with Isherwood, to be titled The Animals, for their nicknames for each other, Dobbin and Kitty.

Bachardy explained that the 1960s diaries, which he worked on with editor Katherine Bucknell, didn’t leave out anything unless it was libelous. “It was very tough. Each of us learned a great deal about libel laws.” The two asked many of the characters running through the pages for permissions, excerpting certain words and replacing them with Bucknell’s edits in brackets.

“Often she would be told, ‘Oh, anything, I’m delighted to be written about, publish anything,’” Bachardy said. “Then she would send the pages and they would come back with ‘Take out this, take out that.’” 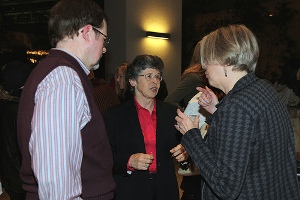 While the diaries contain many descriptions of other people’s parties, the panel recalled the parties Isherwood and Bachardy held. When asked by Kipen whether he visited their home, Alexander said, “Yes, and I passed out there too.” He went on to describe the home as packed with paintings hung in “academic fashion, which they have to be because there’s not enough room…. The house itself is very intimate. The scale is domestic.”

Isherwood and Bachardy made dinner for guests before they hired a cook to help, Bachardy recalled. “We split up the chores by Chris taking care of the barbeque out on the deck and I would do the vegetables and salad and desserts in the kitchen, and that kept us out of each other’s hair.” Isherwood was particular about having no more than eight guests. “If there were enough people for the conversation to break into two, Chris felt it was too many,” Bachardy said. “It always made you feel the other conversation at the other end of the table was better.”

Alexander recalled that Isherwood and Bachardy’s dinner-party motives weren’t always so pure. “People would be chosen who they knew would be in conflict, and inevitably something like that would happen, in a very civil way,” he said. “I had never known that kind of pleasure.” 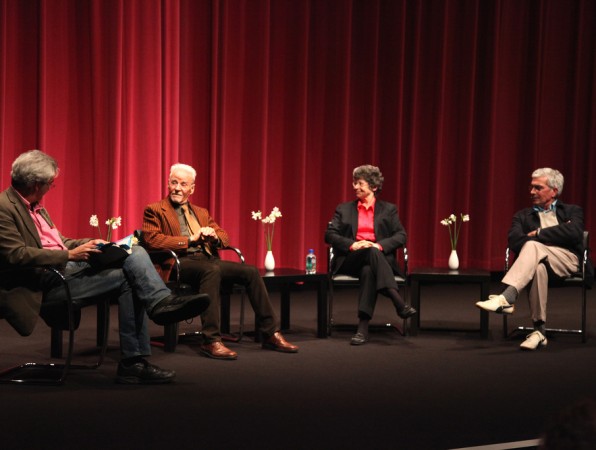