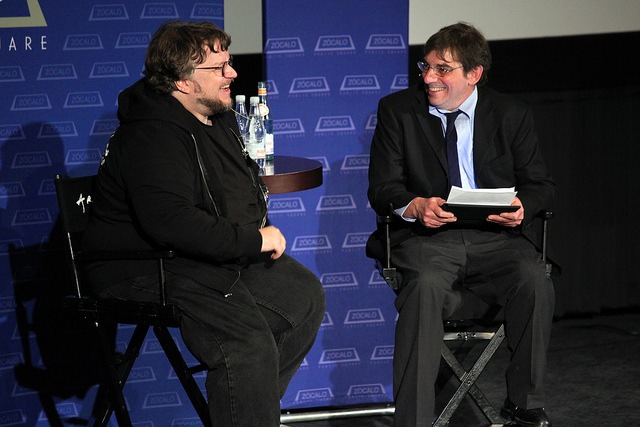 “Tonight’s presentation will be in 3-D,” moderator Rick Kleffel of The Agony Column quipped when introducing acclaimed film director Guillermo del Toro. In many ways, it was.

Del Toro, the creator of magical films such as Pan’s Labyrinth, Cronos, and the Devil’s Backbone, has a penchant for descriptive imagery. It’s a skill he applies not only to film, but also to conversation.

“I always say that I’m like the bad-looking version of Benjamin Button,” del Toro said, facing a full theater of fans at the Hollywood Arclight Cinema. “I am going in reverse. As a child, I was incapable of having a good time. I was obsessed with hell. I was lonely, pale, skinny…Now, I don’t give a fuck.” 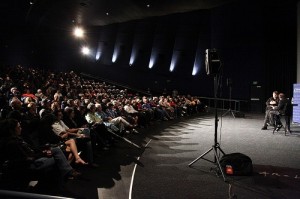 Del Toro had a “very, very odd” childhood in Guadalajara. “It’s not that I was beaten or locked in a closet, although I was both, but I think there are certain spirits that are affected by the world around them,” he explained. “Everything I learned about horror, I learned as a kid.”

Del Toro split his time between a palatial home owned by his parents and an old, narrow house owned by his great aunt, whom he called Grandma. He was remarkably free of adult supervision, going for days (or even weeks) at a time without seeing anyone. “Literally, you could skateboard down the hallways,” he recalled.

Del Toro played with make-up-and horror-at a young age. To frighten his nanny, he would slather himself with wax, blood, and ketchup and then jump from a house chimney into a hidden pile of pillows. He delighted in her screams, until one day he really did hit himself in the head.

Other hobbies included tending to various pets. “We raced hundreds of serpents in the house,” del Toro recalled. “We trained falcons for retrieval. I trained a crow who became my mascot.” This small zoo of creatures also included a deer and an illegally kept eagle.

Reading, Writing and Getting Lost 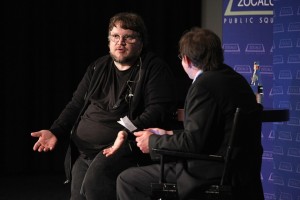 Del Toro grew up in economic comfort because his father had-literally-won the lottery. Friends encouraged del Toro’s father to do a number of things with the sudden windfall, among them building a library and buying a Super 8 camera-both of which del Toro’s father did and neither of which he ever used. For Guillermo del Toro, however, the books purchased by his father became a haven, and the camera was soon put into service to make short films.

One of the books on del Toro’s reading list was an encyclopedia of family health, and this, said del Toro, turned him into the world’s youngest hypochondriac. He also read twelve volumes on fine art over and over again.

Lowbrow reading had an equally large influence. Del Toro ascribes his mastery of English in part to Mad Magazine and to subtitled movies like Creature from the Black Lagoon. Every Tuesday he would come home with a stack of 20 comic books, which, when they were discovered, his mother would either throw away or burn. Still, the impressions they had made upon del Toro were irreversible. “Those comic books were gold for me,” he said.

As an adult, del Toro is fond of evoking Charles Dickens, one of his favorite authors. “I try to write with images, with the density of a novel, and for the pacing to be that of reading,” he said. When contemplating a modern-day film version of Frankenstein, del Toro envisions a return to Mary Shelley’s original book.

Although he writes methodically, del Toro doesn’t believe in structured writing. “It’s crucial for a storyteller to get lost,” he explained. He dismisses most books on screenwriting. “They’re selling you a shoe size and they don’t know what foot you have,” he analogized. “The saddest journey in the world is the one that follows an itinerary…you’re not a traveler you’re a fucking tourist.” He added, “Why do I have to go to India and see the Taj Mahal? I want to get diarrhea in a corner eating something horrible.”

The result is filmmaking that takes a circuitous, rambling path. “Vision rhyming” is a term del Toro has coined for the poetic references that his films make to one another and within themselves. He is also drawn to spirals in his imagery. 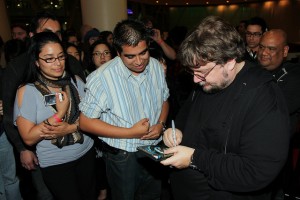 Moderator Rick Kleffel noted that immortality and success are recurring themes in del Toro’s movies. “The idea of accumulation is truly the root of all evil,” del Toro explained. “If you have more than 10 million dollars you have to prove to me why you’re not an asshole.”

For del Toro, money goes hand-in-hand with cold reason, which has cut us off from a more encompassing mythological history, one in which gods could be human-headed falcons. Del Toro believes this divorce from myth is part of the reason many of his contemporaries look askance at the style of movies he makes. “I come from a country and a place where the movies that I wanted to do were impossible,” del Toro told the audience. “People said, ‘Why don’t you do social realism?’ [But] I kept saying I want to make monster movies because I think those are socially important.”

For del Toro, fables offer a path to wisdom, and returning to a sense of child-like openness is what allows us to touch the truth. “People say you have to see it to believe,” del Toro said. “I think you have to believe it to see it.” 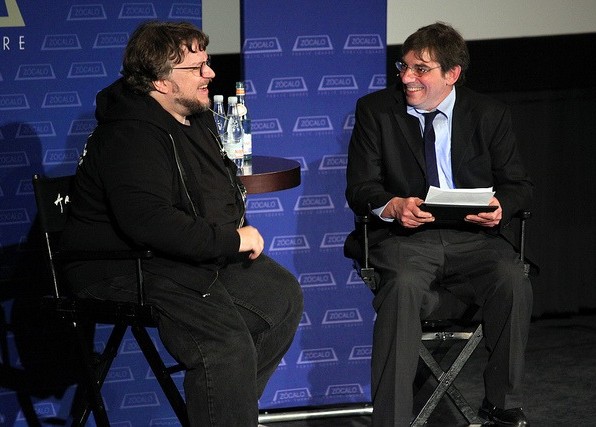