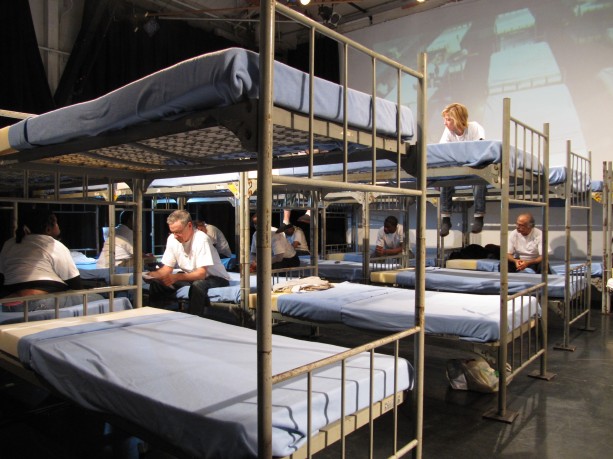 In 1985, John Malpede–a director, actor, activist, and writer–founded the Los Angeles Poverty Department (LAPD), the first performance group in the nation comprised primarily of homeless and formerly homeless people. Their latest project, “State of Incarceration,” looks at the experience of going to prison–and coming out of prison–from the bus ride in to the first job out.

The set consists of 60 bunk beds, and actors intermingle with the audience.

Q. How did you start LAPD?

A. I was a performance artist living in New York, and I did pretty much everything you could do as an actor. My friends were all trying to get commercials, and I started to work with the homeless. I moved out to LA in 1984 and soon became a welfare advocate. It was personally satisfying and it changed my life. Now LAPD has become a real part of the community on Skid Row.

Q. Is the Los Angeles Police Department upset that you’ve taken their acronym?

A. No, they’ve got bigger fish to fry.

Q. What was the genesis of “State of Incarceration”?

A. It started about a year ago. One third of the parolees coming to LA who are getting out of the country’s biggest prison system–the California State system–end up in Skid Row. Kevin Michael Key, who is one of the main people in our group [a lawyer, performer and community outreach organizer], brought incarceration up as an issue. We contacted different parolee programs in the neighborhood. We went to re-entry programs. A lot of people came because it was a venue to talk about their experiences in an artistic way.

Q. How did your cast of twenty create the show?

A. We rehearse at a community space called UCEPP: United Coalition East Prevention Project. For one exercise, everybody has a notebook. And we tell everyone to go in and “Spend time in your cell.” They get a spot on the floor, and they just stay there for twenty minutes and then write what was going on in their heads.

Q. Did you hit any major hurdles?

Q. What do you see as the main connection between homelessness and incarceration?

A. Well, I’m reluctant to summarize such complex issues, but the county jails are known as the biggest mental health facilities anywhere. And there’s a revolving situation: People get into jail and lose their housing.

Q. Did you learn anything new about the prison system through this process?

A. I know a lot more about the lawsuit with the U.S. Supreme Court, a case which has been building for about 20 years. A three-judge panel [of the 9th Circuit Court of Appeals] has deemed the abysmal health and mental health services in the California prison system as “cruel and unusual punishment,” but getting the remedy still hasn’t happened. The State appealed and it’s now with the Supreme Court. A judge said they should bring it down to 137% of capacity, which is still way over capacity.

Q. Have you ever been in prison?

Q. What’s the one message you hope people take away from your show?

A. The show is about how to survive spiritually in a degrading environment.

Q. How do other parolees respond to watching your work?

A. When we’ve done this show at parolee programs, it’s such an awesome experience because everyone recognizes everything. It’s just a really responsive audience. Actually, right now those programs are in jeopardy. During the Bush Administration, Bush signed the Second Chance Act, which gave a pot of money to support [parolee] programs to help people not only get jobs but to help them grow, so they were capable of thriving when they got out. Congress wants to cut that money in half. This is a bad thing.


“State of Incarceration” is directed by John Malpede and Henriëtte Brouwers and written / improvised by the LAPD performers. Friday and Saturday, February 4 & 5 at 8:30 pm @ Highways Performance Space at the 18th Street Arts Center, 1651 18th Street; Santa Monica, CA 90404, 1/2 block north of Olympic Blvd. Tickets are $20 general admission and $15 for members/ students/ seniors. Buy your tickets online at http://www.highwaysperformance.org. Call 310-315-1459 for show information and to reserve.

The performance events will include conversations with Esther Lim, B.S., MSW, and Attorney Jessica Price of the ACLU’s Jails Project and Attorney Michael Bien, of ROSEN, BIEN & GALVAN, LLP., an attorney for the plaintiffs in the Coleman and Plata v. Schwarzenegger case.