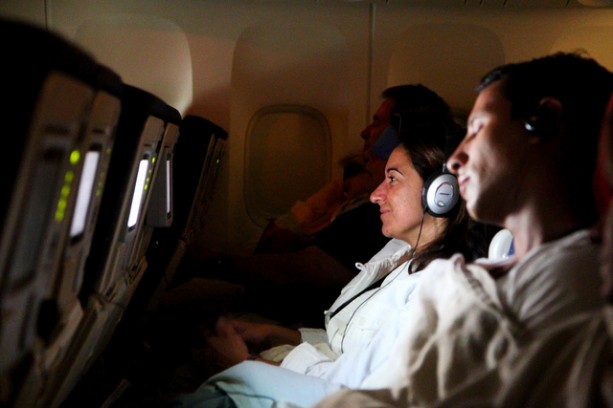 I am typing this in Seat 21 E, on American Flight 1243 from Washington National to Miami. It’s a packed Boeing 737, and the “E” in 21 E, a middle seat, might as well stand for “excruciating.” Flying these days amounts to a series of skirmishes for space. There’s the scramble for the overhead compartment; the flexing of legs and knees to limit the backward surge of the seat in the next row up; and, for me in 21E, the maneuvering of my left elbow to outflank the wily right elbow of 21D to gain command of the back fifth of the armrest. As it is, because of the encroaching tilt of 20E’s seatback, my own bit of airspace doesn’t allow my (smallish) laptop screen to rise to a full 45-degree angle.

My fellow travelers are in a sour mood, despite being on a Friday evening flight to Miami. A young woman two rows ahead of me chews out the flight attendant for not having peanuts on hand. The steward mumbles something about peanuts and allergies. She challenges him to offer something else. He counters that ticket prices no longer cover such amenities. Amid this squabble, which distracts me, 21D seizes the chance to refortify his armrest dominance.

Welcome to the golden age of air travel.

No, really, welcome to it. Stop the whining – and that goes for you too, Martinez. The pining for the good old days of air travel is overwrought. In all the ways that matter, flying has never been better.

Let’s start with safety, the most important, though often unacknowledged, measure of industry performance. Do you know how many people died on U.S. airlines in 2010? Zero. That’s right, more than 700 million passengers boarded American carriers; all made it safely to their destinations. (News flash: More than 30,000 Americans die in car crashes each year.) That’s the third perfect year out of the last four, and 2010 was the first year in which the industrialized world as a whole could claim zero fatalities.

On the list of safest human activities, flying a commercial airliner has to rank up there with meditation, just behind spoon holding. As Arnold Barnett, a Massachusetts Institute of Technology professor who studies airline safety, once told USA Today, a child born today is more likely to be elected president in his or her lifetime than to die on a jet flight in an industrialized country.

Back in the supposed golden days of aviation, when air passengers donned three-piece suits for the occasion, flying was a dicey proposition. As Sam Howe Verhovek’s entertaining new book Jet Age: The Comet, the 707, and the Race to Shrink the World recounts, the first commercial jetliner, the British Comet, flown by the British Overseas Airways Corporation in the 1950s, captured the world’s imagination and exuded glamour, but it had a propensity to blow up in midair. Perhaps to calm people’s nerves, the airline offered its own specialty drink onboard – “the Comet,” three-sixths brandy, two-sixths fresh-squeezed grapefruit juice (yellow, not pink), one-sixth Van Der Hum liqueur, a dash of Angostura bitters, and a sliver of lemon peel. Party on.

After one of several unexplained Comet crashes, Lord Brabazon of Tara, a well-known pioneering British pilot, told an inquiry, “You know, and I know, the cause of this accident. It is due to the adventurous, pioneering spirit of our race. It has been like that in the past, it is like that in the present, and I hope it will be in the future.” That’s not how you persuade grandma to fly over for Thanksgiving.

It’s a good thing that we didn’t settle for Lord Brabazon’s stiff-upper-lip fatalism, tucking into our Comet cocktails while awaiting possible mid-air incineration. Flying is obviously much safer than it was in the age of the early jetliner, but it’s also safer than it was just a few decades ago. Since the 1980’s, overall safety rates worldwide have improved fivefold.

Let’s go back to that other astonishing number above – not the zero fatalities, but the 700 million-plus people who boarded U.S. airliners last year. Flying isn’t just safer than ever. It’s cheaper than ever, which is why roughly 90 percent of Americans have flown on an airplane, compared to just half on the eve of airline deregulation in the late 1970s.

When I helped my mother move apartments last year, we found old records she’d kept (the Stasi would have bowed before this woman’s archiving prowess), and I was astonished to see that back in the early 1980s my round-trip tickets from El Paso to Boston and New York hovered between $550 and $750. That’s not adjusted for anything; that was the actual ticket price. ($550 translates to about $1125 in 2011 dollars.) Fire up Expedia and you can easily get $350 fares between El Paso and New York today. Let’s not get into what happened in the same intervening period to the cost of fuel for the airlines – or tuition at the schools I was flying off to attend.

Ah, but the fees, you say. All those fees! Fork over the green if you want a checked bag, or five more inches of legroom, or just a cookie. And don’t even think of changing that ticket.

Well, okay, the fees are annoying. I won’t argue that they’ve made air travel nicer. But they do relate directly to the preceding point about cheapness. We whine when we’re on the plane, but when we’re purchasing tickets beforehand all we care about is the lowest possible fare. Nothing else.

Those hated fees are a means of reconciling our demand for impossibly low fares and the need of airlines to pay their bills. (Buy a first-class ticket and they’ll feed you and check your bag for free, just like in the old days. Still interested?) Let’s be honest. There’s no reason why food or checked bags should be free. It’s not like you have riots in movie theaters because the house charges for popcorn. If refreshments were included at the movies, tickets would be pricier. The same goes for airlines. Pay for what you use, and be grateful that the airline soda is (still) free.

In light of the financial turbulence faced by the airlines, it’s amazing we’ve seen any improvements in air travel. And yet new terminals are being built and old ones refurbished, and planes are being wired for Web access and satellite TV. We’ve also handily weathered post-9/11 security. I was at the New York Times on 9/11, and in the days afterward one of our editors insisted that from now on people would have to undergo hours of security screening prior to each flight (as if passengers would really submit to strip searches for the privilege of getting to Fresno). Well, it’s a decade on, and we’re checking in at home and whining about having to take our shoes off at security.

But all right, if you’re still annoyed by everything – the security theater, the space jostling (21D is pretending to sleep, even as his elbow battles on), and the stealthy fees you’re now forced to pay – then finally consider this: your friendly carrier has suffered even more than you have. Airlines collectively lost more than $50 billion in the last decade. Someone has paid dearly to make this new golden age of air travel possible.

So just be glad that airlines don’t pass a collection basket prior to landing.