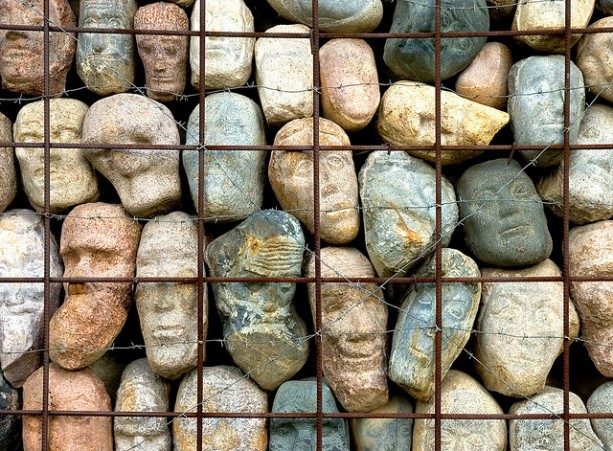 Bloodlands: Europe Between Hitler and Stalin
by Timothy Snyder 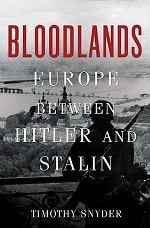 Bloodlands, indeed. Starting with Stalin’s reign of terror and famine in the Ukraine in 1932-which was followed by systematic killings of national minorities, prisoners of war, and Europe’s Jews-Germany and the Soviet Union murdered at least 14 million noncombatants as a matter of deliberate state policy in the regions east of the Molotov-Ribbentrop line, the area Timothy Snyder, a renowned historian at Yale, calls “the bloodlands.”

Snyder emphatically rejects the accepted perception of Auschwitz and the gas chambers as the sole iconic and enduring image of the Holocaust. Auschwitz, he writes, “was the climax of the Holocaust, reached at a moment when most Soviet and Polish Jews under German rule were already dead.” Bloodlands is about the entirety of Hitler and Stalin’s murderousness. Snyder argues that all of the killing was attributable to the mutually reinforcing “logic” of the two tyrants, colonizers with “visions of transformation” that expanded beyond their nation’s borders. Stalin, the “pioneer of national mass murder,” eliminated enemies of his revolution. Hitler, seeker of of living space for native Germans, eliminated non-German races, especially Jews.

Snyder argues that Stalin’s importance, both as a leader of his own genocide and as an enabler and instigator for Hitler, has been unduly minimized. This is partly because the Holocaust has dominated people’s perceptions of mass killing during the conflict and partly because the Soviet Union was officially an enemy of Hitlerism during the 1930s. While Stalin and Hitler presented their nations as mortal enemies, however, Bloodlands focuses on their similarities, particularly on their mutual logic of mass murder. Both undertook similar policies of “redistribution” in pursuit of utopias. Within Germany, the Jews were the principal villains, while in the Soviet Union it was the “capitalists” (who were actually peasant farmers) and enemies of the revolution. The key difference, Snyder writes, was that “the Germans generally killed people who were not Germans, whereas the Soviets usually killed people who were Soviet citizens.”

By the late 1930s, the Nazis were engaged in public violence against Jews (Kristallnacht, for example), and they succeeded in driving more than 100,000 Jews out of the country in 1938 and 1939. But Stalin demonstrated throughout the 1930s that there was another way to deal with unwanted populations. During the Great Terror of 1937, roughly 400,000 Kulaks (relatively well-off peasants) and other “capitalists” were executed within 18 months. Stalin then moved on to national enemies, shooting more than 100,000 people for “spying” for Poland. Before Stalin’s example had been set, “no one beyond the Soviet Union, not even Hitler, seemed yet to have grasped that mass shootings of this kind were possible.”

After the Reich broke the Molotov-Ribbentrop pact and invaded the Soviet Union, Hitler and his top leadership concocted the Hunger Plan: they would starve 30 million Soviet citizens to death and feed the German citizens instead. But mass murder by starvation, it turns out, is a difficult endeavor requiring a formidable bureaucratic apparatus (“ruthlessness is not the same thing as efficiency,” Snyder writes). The Nazis instead had to settle for instructing the German army to live off the land and steal food on an ad hoc basis. As for the Jews, Nazi strategies for deportation proved infeasible. The failure to conquer the Soviet Union meant that Hitler “controlled no wastelands into which Jews could disappear.” That meant murder would have to be the final solution.

Not surprisingly, prisoners of war were treated cruelly by both sides. If they didn’t die in transit, captured soldiers were given only starvation rations in open-air camps. Roughly half a million Russian POWs were shot to death, for instance, while another 2.6 million died of starvation or mistreatment in transit.

The power of Bloodlands comes from the simplicity of the logic it describes. The Germans wanted living space and food and could expand only over land. The Soviets wanted to create a socialist utopia and protect the revolution from all imagined enemies. The solution, in both cases, was the same: murder.

Excerpt: Hitler’s henchman Goring in September 1941 behaved strikingly like Stalin’s henchman Kaganovich had in December 1932. Both men laid down instructions for a food policy that guaranteed death for millions of people in the months that followed. Both also treated the starvation their policies brought not as a human tragedy but as enemy agitation. Just as Kaganovich had done, Goring instructed his subordinates that hunger was a weapon of the enemy, meant to elicit sympathy where harshness was needed. Stalin and Kaganovich had placed the Ukrainian party between themselves and the Ukranian population in 1932 and 1933, forcing Ukrainian communists to bear the responsibility for grain collection, and to take the blame if targets were not met.

Further Reading: The Third Reich in Power by Richard Evans; The Harvest of Sorrow: Soviet Collectivisation and the Terror-famine by Robert Conquest