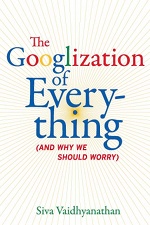 Google has taken a colossal tangle of sometimes-useful information (the Internet) and organized it for us. We, accordingly, love Google. For the search tool that does that magical organizing. For Gmail and Google Maps. For Google Documents and Google Analytics. And for the dozens of other free services Google provides.

And this is exciting. But, according to Vaidyanathan, we must not let our excitement prevent us from seeing Google for what it is: a young, disproportionately powerful, publicly-traded technology company that earns its money – and thus justifies its existence – by selling our attention to advertisers. His book, The Googlization of Everything (And Why We Should Worry), is a skeptical study of Google as a deliverer of knowledge, a server of ads, a compiler of information about users, an analyst of online behavior patterns, a force for freedom, a friend, a mentor, a god.

Vaidhyanathan compares our collective attitude toward Google to our reverence for airplane and automobile technology in the 1920s. Cars, trucks, and planes were so obviously culturally transformative that we celebrated and embraced them without considering the problems they might cause. And, “soon after World War II, flying and driving became elements of daily life for most of the developed world. Yet the externalities of both these transport systems – from global climate change to global terrorism to global pandemics – have left us wondering how we made so many bad decisions about both of them.” According to The Googlization of Everything, if we don’t closely examine our relationship to Google and start making adjustments immediately, we’ll wake up in 20 years with a similar set of regrets. The book begins that examination, and Vaidhyanathan, as his title suggests, is worried about what he sees.

One of his most compelling concerns is that Google is a business. Its stated mission is “to organize the world’s information and make it universally accessible and useful,” but, as a corporation, it also has a legal responsibility to earn as much money as it can, as fast as it can. In the author’s words, “the imperatives of a company that relies on fostering Web use and encouraging Web commerce for its revenue may understandably morph into a system that privileges consumption over exploration, shopping over learning, and distracting over disturbing.”

Another of Vaidhyanathan’s worries is that Google has been taking responsibility for work traditionally reserved for the public sector. He doesn’t blame Google for stepping in and getting things done – building Google Earth, compiling Google Books, organizing Google Scholar – but he finds it disconcerting that “when Google does something adequately and relatively cheaply in the service of the public, public institutions are relieved of pressure to perform their tasks well.”

A third worry is Google’s youth. Google has largely lived up to its self-established reputation as a company that does no evil. However, “just because Google behaved a certain way between 1998 and 2008 does not mean it will behave that way for the next ten years.”

“It’s almost impossible,” Vaidhyanathan writes, “to imagine living a privileged, connected, relevant life in the early twenty-first century without Google. It has become a necessary – seemingly natural – part of our daily lives.” And that, to Vaidhyanathan, is terrifying.

Excerpt: I try to avoid making predictions in my scholarly life, but I am willing to bet money that in one hundred years the University of Virginia will remain a premiere institution of research and education, and Google will be no more.

Jake de Grazia is Director of Education for the iMatter Campaign. He blogs here and here.