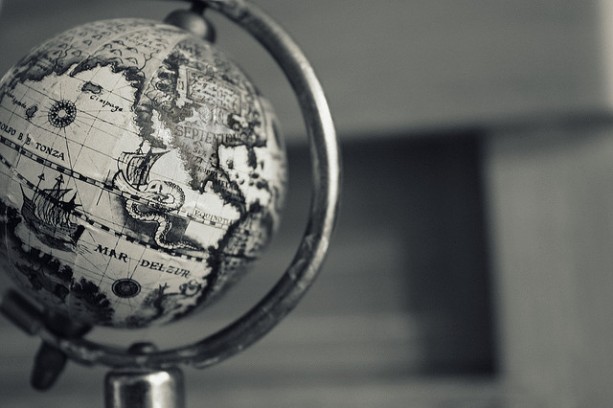 Irresistible North: From Venice to Greenland on the Trail of the Zen Brothers
by Andrea di Robilant 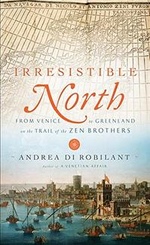 The tale of the Zens’ adventure was published by a descendant named Nicoló the younger in 1558 and served as the basis for the first map of the world, but it was deemed a fraud in the 19th century. Di Robilant’s book examines both the controversy and the voyage itself. Part travel story and part historical mystery, the narrative moves seamlessly from the haunted palazzi of medieval Venice to the far corners of the Atlantic Ocean and its islands. Di Robilant uses that first world map, with all its ragged inaccuracies, and sets off to learn for himself where the brothers Zen traveled and what clues they left as evidence of their presence.

Nicoló Zen the younger has generally been dismissed as an elaborate swindler, in part based on the map and narrative he wrote about his ancestors. Parts of the map were clear enough to di Robilant. “Greenland’s outline was traced with startling precision, but then a lumpy Nova Scotia seemed to have lost its bearing and was floating eastward, away from Newfoundland and the coast of New England,” he writes. “Strangest of all was a large, bulky island called Frisland, which the author placed above Scotland.”

After a brief scholarly investigation, di Robilant concludes Frisland is actually the Faroe Islands, clumped together into one mysterious land mass. So he jets off to the Faroes, where an old sheep farmer tells him about a hidden treasure in a now-dilapidated church dating to around 1300. In a nearby bookstore, di Robilant is excited to find a book by a local author that mentions Nicoló Zen arriving in the Faroes in the 14th century to hide a treasure brought back from the Holy Land.

After following di Robilant on many similar adventures around the smaller islands of the North Atlantic, where he finds evidence both for and against the Zens’ tale, readers are left with 240 pages by an author who hasn’t quite made up his mind about the veracity of their story. He doesn’t take a position on an amateur historian’s belief that Nicoló Zen and the Earl of Orkney colonized parts of Nova Scotia, or a competing claim that parts of the narrative had been added in the Middle Ages.

Di Robilant focuses too much of the book on recreating the adventure story, introducing marginal historical figures and getting lost in the romance of the open seas. The balance between personal involvement and scholarship is often uneven. However, those who like historical puzzles will appreciate the few moments when the author unravels parts of the myth surrounding the discovery of the New World.

Excerpt: Nicolo the Younger claimed the prince’s name was Zichmni, a bizarre combination of phonemes, which, as far as I could tell, had no recognizable etymology. It was probably the result of a wrong transcription from one of the original letters sent home by Messer Nicolo. Zichmni’s true identity remains controversial, as we shall see. But Nicolo the Younger did provide two significant clues: Zichmni was “lord of Sorant, a region near Scotland,” and he ruled over “a group of islands named Porlanda, to the south of Frislanda, which were the richest and most populous in the entire region.”

Ellen O’Connell has been published in several national literary magazines and is a contributing writer to the forthcoming book, The Moment (2011 Harper Perennial). This year she was nominated for the 2011 Pushcart Award and currently teaches creative writing at UC Santa Barbara.