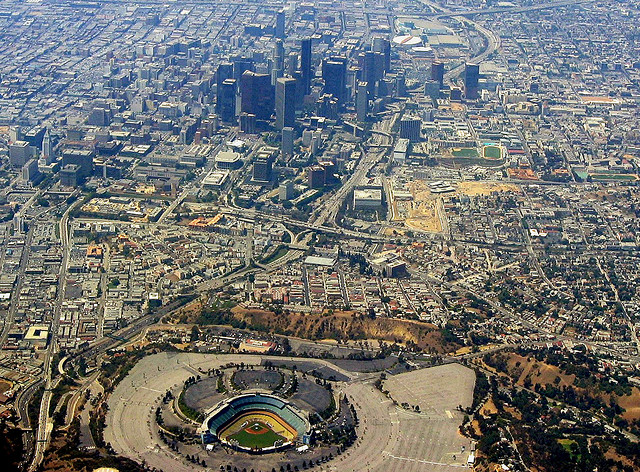 When I was young and my brother was a little older, we would be in bed before dark on mid-summer evenings. (The times were different then.) We would lie in our separate beds, but only an arm’s length apart as shadows lengthened up the far wall of our room, until the dial of the Zenith radio on top of the dresser was the only light left. The Dodgers’ game would be on. Vin Scully was calling the plays.

The consolations in the tenor murmur of that voice came with a price. But my brother and I did not know it. We knew vaguely that the Dodgers had broken Brooklyn hearts, but we believed, as we drifted between the last pitch and sleep, that the Dodgers could never again break other boys’ hearts so deliberately. The Dodgers had come here, to this almost perfect place, to be with us.

My brother and I were wrong. The Dodgers’ arrival in Los Angeles in 1958 was a historic break in the way sports loyalties worked. Until then, a baseball team and most of its fans expected to share a highly specific sense of place. After – and with increasing callousness – a team’s connection to a place would lag behind corporate values. My brother and I listened to Vin as a boyhood gift, but his voice was (and is) just another opportunity for branding a commodity. From the beginning, the Dodgers’ arrival in L.A. wasn’t an embrace. It was a deal.

The sale of the team in 1998 to Fox Entertainment Group, owned by Rupert Murdoch’s Australia-based News Corp., was a $311-million deal Murdoch needed to anchor Fox’s cable sports network. It was equally a deal that team owner Peter O’Malley needed to manage the tax implications of inheriting the Dodgers. When Fox sold the team to Boston parking lot moguls Frank and Jamie McCourt in 2004 for $420 million, the deal was eagerly blessed by MLB Commissioner Bud Selig as a business favor to Fox, holder of baseball’s television broadcast rights. Apparently, everyone inside baseball knew how much that deal stank, how overleveraged the McCourts really were. By taking the Dodgers into receivership last week, Selig is trying to engineer another deal. That probably won’t have much to do with us or Los Angeles either.

When I was young, on the morning after a game, over the plate of two fried eggs and four strips of bacon my mother made us every school day, I would read Jim Murray’s column in the sports section of the Los Angeles Times, but not for his thoughts on the Dodgers. I read Murray for the sound of the voice in his columns, the same way I read Matt Weinstock, Jack Smith, Art Seidenbaum, and Charles Champlin in the Times. I learned from all of them the centrality of place in an imaginative life, a hunger for the stories, and the power of having a voice. But those are boyhood values that are gone for deals, too.

Like the arrival of the Dodgers in Los Angeles, the sale of the Times to the Chicago-based Tribune Company in 2000 was a deal that sounded good to Angeleños. Instead of bitter Chandler family members, real journalists would run the paper, even if nearly all of them were out of town. And like the sale of the Dodgers to the McCourts, which floated on so much borrowed money that the franchise is now $525 million in debt, the leveraged sale of the Tribune Company in 2007 to developer Sam Zell turned out to be a cynical farce. Another fast-talking out-of-towner took control of an iconic L.A. institution for cents on the dollar and with no idea of Los Angeles. What mattered was making the deals. The deals had nothing to do with this place or our story.

The deals still do not. The Delaware bankruptcy court overseeing the dismantling of Zell’s empire of paper is only interested in getting its assets sold. Commissioner Selig’s takeover of the Dodgers was only a last-ditch maneuver to prevent the McCourts from saving their borrowed lifestyle by mortgaging the Dodgers’ future broadcast rights.

Something narrow and coarse in the imaginations of the McCourts and Zell and Selig and their business partners squeezed out any moral dimension to their deals or any feeling for Los Angeles. But to question how they acquired so much of our place so cheaply is uncomfortable for Angeleños. Better to grumble about indifferent outsiders. Seen from their perspective, Los Angeles has only market value, the sort of value that sold Los Angeles to the world as one of the most successful lifestyle products of the 20th century.

Not any more. Too many deals have soured; too much of the city has been taken into receivership. Even our citizenship – already problematic – has been foreclosed. Deals under duress have taken too many of our civic institutions from local control and put them in the hands of monitors and special masters, raising another question we would prefer to duck: Do we have the capacity to govern ourselves?

From 1996 to 2006, the Metropolitan Transportation Authority operated under federal supervision, after religious and civil rights organizations charged the MTA with “transit racism.” A special master was appointed by the federal court to oversee the MTA’s bus service under a consent decree to insure that buses would meet demand in low-income neighborhoods.

Complaints in the early 1990s that special education students were being systematically underserved by the Los Angeles Unified School District led to a civil rights suit and another consent decree under which an Office of the Independent Monitor evaluates the district’s compliance with court orders and federal law. The OIM was supposed to complete its work by 2006, but the district has yet to meet all twelve of the goals set by the consent decree.

In the aftermath of the Rampart CRASH scandal, in which members of an anti-gang police unit were charged with widespread corruption and unprovoked violence in late 2000, the Los Angeles Police Department entered into a consent decree that made the federal Department of Justice arbiter of virtually every aspect of the department, its officers and their interactions with suspects. The consent decree ended in 2009 – after the department was turned around by a police chief imported from New York – but a transition agreement compels the LAPD to continue demonstrating compliance to the DOJ.

Grudging compliance to special masters and appointed monitors may be the best we have to give in a city fragmented by institutional barriers and so distracted from civic concerns. Few of us want to see Los Angeles as it is or what it should be; we’ve let others do it for us. This city’s unaccountable political structure, its conception of power merely as the means to another deal, and the city’s air of disconnected neutrality have let thugs police its streets, unfeeling technocrats run its services, and the McCourts loot its most-loved institution. And when those faults became intolerable, others – not us – imposed their solutions. We’ve come to expect this – and worse – from Los Angeles and ourselves. “Forget it, Jake. It’s Chinatown.” might as well be the motto on the city seal.

Los Angeles succeeded once, less as a place and more as a succession of slick real estate deals that have reached the limits of our landscape. Truthfully, we never needed a shared moral imagination until now, when so many desertions from the common good have shown us how little loyalty the once powerful had for this place. And no deal, no special master, no court-ordered monitor can supply what we lack.

D. J. Waldie is a contributing editor at the Los Angeles Times and a contributing writer for Los Angeles magazine. He is the author most recently of California Romantica with Diane Keaton. He blogs for KCET TV at http://www.kcet.org/user/profile/djwaldie.