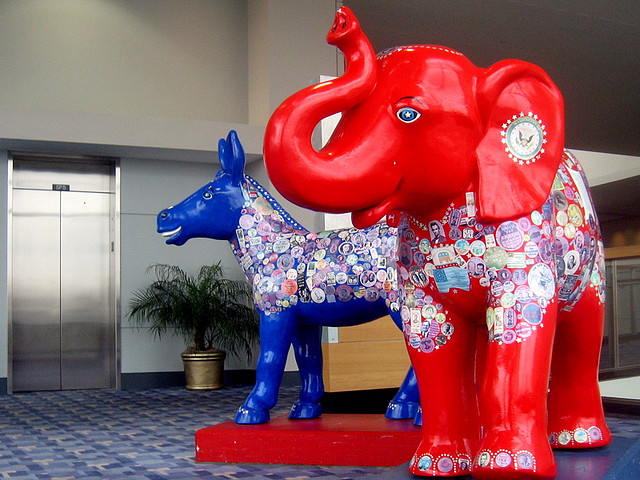 Anyone wondering why political gridlock undermines California’s governance need look no further than the two big political conventions that occurred a month-and-a-half apart in Sacramento. The Democrats had their state convention this past weekend. Like the Republicans who gathered in late March, the delegates on hand represented a distillation of their party’s polarized core attitudes.

It’s commonplace to assert that political disengagement is hurting California’s civic culture, but reality is a bit more nuanced. The fact is that ideological activists on both right and left are more engaged in party politics than ever before, energizing and polarizing the base of each major party. This in turn alienates moderates from getting involved in parties, leading to their ideological cleansing. As a result, the centers of gravity in each party have become absolutely antithetical. The Democrats are dominated by an ultra-government faction that wants to expand government and its services; the Republicans by an anti-government faction that wants to contract government.

A recent study by the Pew Center finds the same dynamic playing itself out at the national level. The Republican and Democratic parties are more internally consistent, and less overlapping in their worldviews and constituencies, than ever before. Nationally, too, the widest chasm between the two hyper-partisan blocs involves the question of government itself. What should be its size and scope?

Six years ago, the Pew Center asked staunch Republicans and staunch Democrats whether the government should provide more help to the poor even if deficits increased. A 52-point spread divided those who answered “yes” to the question; today, the gap has widened to a whopping 65 points.

Greater polarization equates with greater gridlock, as we have seen both in Washington and Sacramento. Any debate about issues becomes a zero-sum “Crossfire”-style showdown that rewards partisan point-scoring over policymaking. As a result, the sound and fury signifies nothing, little gets accomplished and the vast majority of the people are not served by their government.

How do you compromise between two positions incessantly stretching further in utterly opposite directions? That’s the challenge before new/renewed Governor Jerry Brown. The governor took office confident that he could bridge gaps through endless personal negotiation, to the point where he has essentially disappeared from public view in the process. It’s not working.

Again, those Democratic and Republican conventions say a lot about why the governor is flailing.

The Republicans are all about tax cuts. Even their supposedly moderate gubernatorial nominee, billionaire Meg Whitman, had pushed a big tax cut, in the form of eliminating the tax on capital gains and cutting corporate taxes. The Democrats, in contrast, thrilled to tax increases, especially on the wealthy whose taxes the Republicans want to cut. Put these utterly contrary views with regard to the state’s chronic budget crisis together with the state’s unusual requirement of a two-thirds vote to raise taxes and a political system that till now has allowed safe districts for party stalwarts and you have the quintessence of California’s governmental gridlock. With Democrats in the majority, Republicans can’t actually pass their beloved tax cuts. But with just over a third of the vote in each house, they can block the opposite of their beliefs from being enacted.

Party conventions tend to be affirmations of faith, but it says something about the state of (my) California Democratic Party that its keynote speaker this past weekend was none other than Vermont Senator Bernie Sanders, an avowed socialist who is not even a registered Democrat.

Hey, why not? The election was last year. Over at the GOP get-together in March, extremism ruled the day as well, with party stalwarts ceding the floor to wild man ex-UN Ambassador John “Bombs Away” Bolton, not to mention the toast of Tupelo, almost-presidential candidate Haley “White Citizens Councils were a constructive force” Barbour.

The gravitational forces on Republican legislators were all too evident. The party’s dominant far right ideologues tried hard to prevent any compromise with Democrats. They voted overwhelmingly to oppose Brown’s proposed combination of deep budget cuts and extensions of 2009’s temporary tax hikes even if major changes were made to public pensions and regulations, and state spending limits were put in place.

After first threatening to censure any Republican who voted to allow a special election on the budget and taxes — allowing a vote is, according to party ideologists, the same as supporting a tax — the party came up with a “compromise” position. That is, no taxes, no matter what, even with major reforms on supposed Republican priorities.

End of discussion, too, with no alternative provided to cut $26 billion from the state budget.

The convention did come up with a new party chairman, a fellow named Tom Del Beccaro, whose claim to fame was that he sued trying to block Jerry Brown from becoming California attorney general in 2006 — Brown won in a landslide — on the spurious grounds that Brown wasn’t really a lawyer. The Yale Law grad had put his state bar membership, and the expensive fees, on hold while he served as Oakland’s mayor.

This too follows recent national patterns — when you can’t prevail on the merits in politics, best to try delegitimizing your opponent.

Back in the lefty alternative universe of the Democratic convention, Democratic Party Chairman John Burton thinks Barack Obama isn’t left enough and is far too prone to compromise. Hence the choice of Bernie Sanders as his convention keynote speaker and another Obama critic, former Labor Secretary Robert Reich and current Berkeley professor, as his Saturday night banquet speaker.

Sanders’ keynote address, a speech largely ignored by the much diminished state press corps in their brief stories, was nonetheless very telling about the mood of the delegates, and the party core they represent.

Sanders received a rapturous response from the delegates. He repeatedly inveighed against record levels of wealth and income inequality in the U.S., declared America to be an “oligarchy,” and called for a wide array of social democratic and socialist programs.

From 1980 to 2005, he noted, 80 percent of the growth in income has gone to the top 1 percent, an eye-opening statistic that had the crowd screaming.

Sanders inveighed against class warfare, as in the rich against everyone else.

“The top 400 individuals own more wealth than the bottom half of America,” he declared. “That’s 150 million Americans. These are statistics not for a democracy but for an oligarchy and we are going to change that.”

After Sanders finished, Chairman Burton, a great fan of his friend Warren Beatty’s Bulworth — in which a suicidal senator regains his faith, and gains vast popular support, by ditching his compromising tendencies and re-embracing his left-liberal beliefs — took the microphone again to say: “That speech is worth having voted for me (for party chairman) right there.”

Unfortunately, Jerry Brown, one of the few who is trying to pragmatically compromise between the two absolutist parties, wasn’t able to present a synthesis between the two antithises. Late on Saturday, after an out-patient surgery Friday to remove a common skin cancer, the governor canceled his much anticipated Sunday convention address. He won’t be seen in public again till the stitches are removed.

Too bad California’s body politic doesn’t have the same option. Because for most Californians in the mainstream, neither party show had much to offer.

William Bradley is a California-based political analyst and writer for NewWestNotes.com.