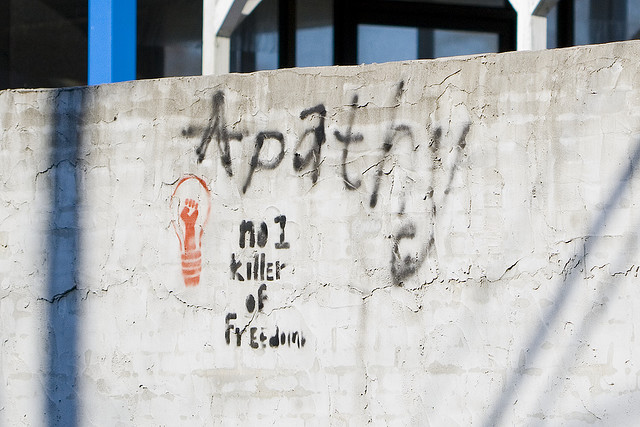 “Washington is Hollywood for ugly people” is a bipartisan quip variously attributable to political figures from Republican Senator John McCain to Democratic adviser Paul Begala. Given recent survey data measuring the civic engagement of communities, wonky Washingtonians can now respond, “Hollywood (indeed, all of California) is Washington for civically disengaged people.” On an array of measures – from discussing politics with family and friends to voting – Californians lag far behind more involved Americans from the nation’s capital.

That’s hardly surprising; Washington, after all, is an industry town, and that industry is fueled by politics. There is a long-standing culture of civic engagement in Washington. What’s more startling is that when it comes to its citizenry’s engagement in political life, California ranks behind Alabama.

That unsettling finding emerges from one of the most extensive annual studies of national civic engagement, the “Civic Health Index,” produced by the Congressionally-chartered National Conference on Citizenship (NCoC). The survey-based report is managed by some of the leading thinkers on civil society in America: from Robert Putnam and Peter Levine to Bill Galston and Stephen Goldsmith. After what began as a national report, the “Index” launched its first state-level studies – including California – in 2008.

The 2010 California Civic Health Index – released in November last year, and sponsored locally by the bipartisan reform organization California Forward as well as the Center for Civic Education and Pepperdine University’s Davenport Institute – shows that while California compares evenly with other large states like Texas and New York on many civic metrics, we fall far behind Washington, DC (not to mention Washington state and most other states) in a number of areas. Overall, the results indicate that Californians’ large voter turnout in 2008 was an aberration – since then, we have returned to political disengagement – inside and outside the voting booth.

For many, the November 2008 elections appeared to usher in a new “civic era” in California, as voters turned out in record numbers to cast their votes for president and a number of statewide ballot initiatives. The liberal political blog Talking Points Memo, noted at the time that “Southern California voters were among the many that have brought civic engagement back to the levels the region saw nearly three decades ago.” Statewide, California’s 63.4% turnout of eligible voters placed them, respectably, right at the national average.

However, in two interesting measures highlighted by the 2010 Index, Californians seemed to be withdrawing from participating in the political sphere. On the survey question, “Do you discuss politics with family and friends?” Californians ranked 46th out of the 50 states plus the District of Columbia, with less than a third of respondents saying they chatted about politics. For those still keeping score, folks in the nation’s capital naturally placed first on this measure at over 50 percent, with states like Montana, Alabama, and Maryland registering in the high 40 percent range.

On the question, “Have you participated in one or more non-electoral political activities (working on a campaign, attending a political rally, etc.) in the last year?” Californians assumed the 35th position with about 25 percent of respondents replying that they had involved themselves politically in ways beyond voting. Again, Washington, D.C. took the top spot at nearly 45 percent with states like Alaska and Vermont not far behind.

The reasons why we, as Californians, lag behind residents of many states range from the obvious to the controversial. Why do states such as Alaska, Vermont and Alabama outperform us in political participation? Robert Putnam, the Harvard sociologist, offered a provocative study of this “engagement gap” in 2007, entitled “E Pluribus Unum: Diversity and Community in the 21st Century.” In the report, which surveyed civic engagement habits in 41 American cities, Putnam found an inverse relationship between a city’s ethnic diversity and it’s civic participation, concluding, “in ethnically diverse neighborhoods residents of all races tend to ‘hunker down’. Trust (even in one’s own race) is lower, altruism and community cooperation rarer, friends fewer.”

Putnam discovered that in areas with higher ethnic diversity there was a “lower confidence in local government [and] local leaders”, “lower political efficacy” (lesser confidence that one’s voice or vote will matter), “less likelihood of working on a community project”, and “less expectation that others will cooperate to solve dilemmas of collective action”. All these factors lead to the last bullet point in this section of the report: “more time spent watching television.”

Putnam’s work has come in for some criticism, but from personal experience consulting with city leaders throughout California – both administrative and elected – the cultural and language challenges that undergird an ethnically diverse citizenry do make engagement difficult. Some residents come from political cultures where participation and political discussion – far from being expected – are downright suppressed. This appears to be particularly true of participation in and knowledge of local government processes.

A greater emphasis on civics education could help ameliorate these obstacles. We should not shy away from defining citizenship as a challenge – demanding not only participation at the voting booth, but actively learning about issues, particularly local ones. This is not a novel concept for our republic. In his travels throughout the United States in the 1880s, the Englishman James Bryce, qualified, “For the functions of the citizen are not, as has hitherto been the case in Europe, confined to the choosing of legislators, who are then left to settle issues of policy and select executive rulers. The American citizen is virtually one of the governors of the republic.”

As municipal budgets tighten and land-use decisions become more expensive, the importance of public involvement in local decision-making has become greater than ever. The City of Bell’s recent debacle became the “poster child” for demonstrating the costs of disengagement, but a similar lack of involvement is occurring in varying degrees throughout California. Take Los Angeles’ 2009 mayoral election, which garnered a paltry 15 percent of eligible voters. Of this election, the Los Angeles Times opined, “Low turnouts are nothing new here, but the numbers are moving in a decidedly downward trajectory because of many factors — timing, demographics, civic culture.”

While voting statistics are important, pulling the lever should be one of the latter stages of the political engagement process. It should begin with a conversation. That’s how “civic cultures” change.

Pete Peterson is Executive Director of the Davenport Institute for Public Engagement and Civic Leadership at Pepperdine’s School of Public Policy. He will be participating in a Zócalo panel on political engagement in California on May 19th.