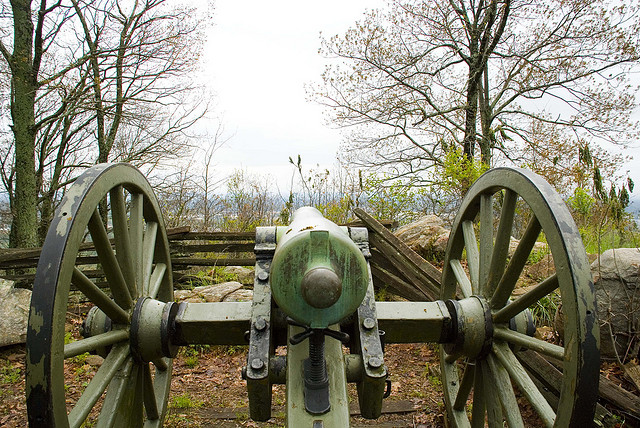 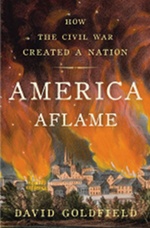 Abraham Lincoln delivered his second inaugural address with victory in a long, brutal and bloody civil war at hand.  The Union – and the American experiment – would be saved, the scourge of slavery eliminated, the North vindicated in its righteousness. Given this climate of triumph, historian David Goldfield suggests, Lincoln’s humble and magnanimous speech was something of a letdown. By speaking only of God’s inscrutability, and by treating “this terrible war” as punishment for the nation’s collective sin of slavery, Lincoln rejected the sentiments of a nation that “believed weighty political issues could be parsed into good or evil.”

According to Goldfield’s book America Aflame: How the Civil War Created a Nation, that absolutism came to characterize antebellum political debate as a result of the rise of evangelical Christianity. It also made political compromise impossible, as both North and South perceived their interests to be ordained by God. Goldfield thus argues that the Civil War was not inevitable, but that moral certainty infused into politics by religion made for “an especially toxic factor in limiting the options of political leaders.”

Leaving aside the possibility that politics always has a moral dimension, America Aflame has grafted a patina of religiosity onto the more traditional explanation of secession resulting from the inevitable tensions between the South’s desire to protect the political-economic institution of slavery and the North’s desire to perpetuate the American Revolution via the westward expansion and economic development plan known as Manifest Destiny. Goldfield sees religious revivalism as the major force behind Manifest Destiny and the idea of ridding the nation of slavery, and sees the two linked by the conviction that their collective realization would enable the rebirth and renewal of America and fulfill the nation’s “destiny as a democratic, Protestant beacon to inspire other peoples and nations.”

Slavery initially became a national political issue because of America’s economic and territorial growth. Expansion brought the question of whether new states would be free, while the Fugitive Slave Law and the Dred Scott decision both resoundingly rejected the idea that blacks could be free and thus directly implicated northerners in the institution of slavery. But as religion seeped into politics, slavery became a moral stain, a sin to be purged. And as secession and war loomed, northern politicians and intellectuals – infused with the language of evangelicalism – came to see slavery as a test of American moral and religious ideals, a struggle between right and wrong, good and evil.

When the Civil War began with the Confederacy’s bombardment of Fort Sumter, northerners welcomed it with an outburst of patriotism and optimism, confident that it would solve the problem of the south and slavery quickly and painlessly. It would be a “magic elixir to speed America’s millennial march” and carry on the spirit and ideals of the Revolution, Goldfield writes, as Northerners “saw the opportunity to extend and protect the Revolutionary legacy, to transform an experiment into a permanent, indivisible country.”

As the horrors of war reached civilians, the optimism and idealism dissipated. But Lincoln had always been more grounded. In the beginning, he wanted only to preserve the Union and the idea of self-government; he was a constitutionalist, not an abolitionist. Lincoln’s speech in 1845, then, used the same framework as his Gettysburg address – the sin of slavery an obstacle to the nation’s destiny – but added the burden on all to fight and suffer.

The war, of course, proved intractable and incredibly deadly. But in a country racing toward its Manifest Destiny, the South had lost before it began. The war evolved from a regional fight to a prolonged battle between a nation and a southern insurgency. The South was being destroyed while the Northern economy expanded and federal power increased. The new transcontinental railroad cemented a “reunited nation” of east and west – psychological compensation for the separation of north and south. Although the nation emerged stronger, more confident in the future and more united after the war, the South was devastated, its people bitterly opposed to the (temporary) reality of black equality and, of course, struggling to make sense of how they could lose a holy war with God on their side.

Unfortunately, the North moved past the good feelings that resulted from victory fairly quickly, as weariness replaced idealism and “freedom” took a back seat to getting on with the business of expansion and growth. Northern disinterest allowed the creation of black codes that severely restricted the freedom of the newly freed slaves, the rise of anti-black violence and the founding of the Klan.

So maybe the problem wasn’t so much the moral certainty of antebellum America, as Goldfield argues, but that the Civil War eliminated it. The freedom blacks enjoyed after the war proved almost as ephemeral as the northern passion for redemption. America Aflame ends with the nation’s centennial, celebrating as one country but not quite with liberty and justice for all. But, Goldfield writes, the Union victory did preserve the ideals of the first American century, even if the country was not yet ready to live up to them or to fight for them again.

Excerpt: A fog had lifted; the way was now clear. Ambiguity and uncertainty had dissipated. . . . “It seems as if we never were alive till now; never had a country till now,” a New Yorker exclaimed. People poured into the streets, even in such southern-leaning places as New York City and Cincinnati, to proclaim their patriotism. George Ticknor, a Boston educator, marveled to an English friend, “The whole population, men, women, and children, seem to be in the streets with Union favors and flags . . . . Civil War is freely accepted everywhere . . . by all, anarchy being the obvious, and perhaps the only alternative.” Pacifists who had rejected violence, even in support of righteous causes, turned bellicose. Ralph Waldo Emerson enthused, “Sometimes gunpowder smells good.”