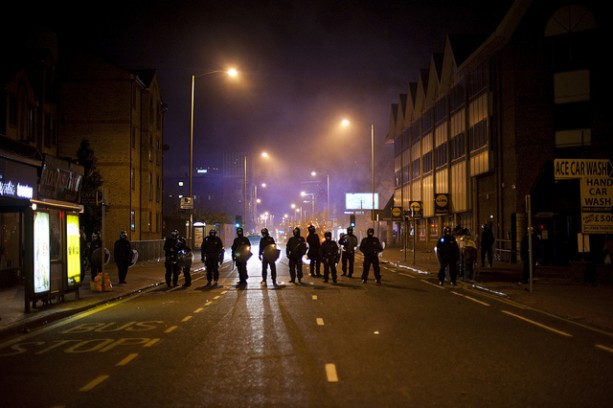 When I moved to London to attend university, my parents were afraid I’d get caught in an explosion. In my first weeks in London, I saw a polished blonde foam at the mouth, overdosing in an alleyway in Notting Hill; a homeless man have a seizure in front of a gathering crowd on the Strand, and blood splatter at my local bus stop. Not long after, my friends and I were chased by a pack of younger kids in West Drayton, calling us would-be literary academics “Marilyn Manson-loving hippies.” This was not Los Angeles. Sure, the first week I lived in Echo Park, someone was killed on Echo Park Boulevard; two cops used the view from my street to stake out the park, and I heard gunshots once, maybe twice a year, but violence never came to my doorstep.

And where I grew up – clean, expansive, deathly suburban – our recurring local tragedy was teen suicide. I remember watching the 1992 L.A. Riots on TV when I was 11. There was talk of blocking off the one road that led in and out of our peninsula community. My dad worked in downtown L.A., not far from the heart of the riots. I don’t remember him not going to work, but I do remember a buoy knife appearing in the back pocket of the driver’s seat, next to his wad of take-out napkins and his never-ending stash of sweet and salty peanuts. Most explosions I have only experienced through television.

The first explosion I knew in London was the July 7, 2005 bombing of the London Transport System. I was interning in London that summer, and had decided to go in late to the office that day. (My hours were flexible.) The train I would have probably taken was a target of the attack. By the time I was set to go under, a nervous frenzy of hundreds of people milled around Finsbury Park station. Not knowing what was going on and determined to get to work, I jumped on a bus, only to fight my way back home when more than one person on a cell phone said, “They’re blowing everything up.” I was alone – no family in the country, all close friends on holiday, no home phone number for my colleagues at the office, little money in my bank account. The casual lack of resources (like a radio or the Internet or local emergency contacts) connoting my freedom that summer suddenly made me feel vulnerable. I wasn’t sure if I would be able to extricate myself out of a crisis situation. Back at my flat, I could only expect radio silence and solitude. So, I made my way to the high street, peering through shop windows looking for the first place with a TV. The local butcher served customers packs of meat, and I stood in the corner, watching the news until I felt calm.

The week before the London riots, I was wandering around East London with a group of friends looking for a particular Pakistani restaurant. Instead, we found the McDonald’s at the end of the world. The fast food restaurant looked like it occupied an old gas station, shoved under a block of council flats, with what looked like the entrance for an oversized parking structure to one side. Aside from the Las Vegas-worthy neon sign announcing a Pakistani restaurant we weren’t looking for, the area is in a state of decay, all color muted by the exhaust of the city, curious collections of detritus stacked against windows and buildings that look like they were never meant to last. You find this all over London. For all the willow trees hanging over swans swimming in ponds in London, there is so much more of the city that is soul-crushing. With London’s property market and wages being what they are, so many of us depend on getting lucky to live in a nice place. Average London rents for one-bedroom flats are reaching 1000 pounds, if I haven’t misunderstood recent reports. If that sum were true for me, I’d be priced out of a beautiful life that wasn’t easy to come by.

My partner woke me up around 1:30 a.m. a week ago on August 9th to tell me a friend had texted: Another friend was not allowed to leave the theatre in Camden where he worked because hundreds of youths were tearing down scaffolding, arming themselves with metal pipes and marching from Camden to Chalk Farm and further along the route I like to walk home on a fine day. We spent the morning hours following Twitter and the news. Like many others, our first inclination was to label the rioters ‘kids’ and ‘chavs,’ Britain’s version of ‘trailer trash.’ It made perfect sense: media equipment and clothing seemed to be what they were after. This riot-shopping, as it looked in the footage of people checking the size of items of clothing, seemed to only have the aim of ‘pimping’ their lives. It didn’t look like it was for lack of basic necessities, just the lack of things a consumer society makes you crave. Things that you can’t imagine being able to afford.

My partner said, thinking of the areas worst hit and indeed areas not far from the McDonald’s at the end of the world, “If you don’t have something to worship or anything beautiful to believe in, God or otherwise, there is no hope.” Wretch 32, a rapper from the riot-wrecked area of Tottenham, said in an interview in the Evening Standard on 12 August, “When you’re from an estate, it’s everything … you don’t know there’s another world.” As the news begins to focus on the faces of the riots, they are of course not all children raised in government housing, but I can’t imagine the rioters were people who wanted to or had the ability to dream themselves out of whatever situation they were in.

England is a place of dreams for me. I like the rhythm of life, the ‘excuse me’ every time someone bumps into you, the pride in local agriculture, and of course, its rich literary history. Not to mention how rich in beauty I feel along the South Bank, in Queen Mary’s Gardens and on my walk to work past houses that look like ornamental cakes. The quaint Old World-ness of England travels well. Think of the royal wedding. Royals just don’t matter like they did when I was a child, and it’s not easy to untangle the media hype about this marriage from, say, any number of celebrity weddings. But when the wedding procession moved through London, I felt compelled to at least have a peek. Yes, I even got a little choked up. The spectacle of the commoner-turned-royal sharing tender looks in public with her new husband was sweet; the performative speech of the ceremony made me feel like something was really happening. At least for someone, life was about to change in a big way. Austerity Britain was put on hold. You couldn’t avoid the tabloid pleasure of Pippa Middleton’s bum.

The London Riots, like the 7/7 attacks and the South Central Riots, remind me that if it’s not one explosion, it’s another. I think of a friend in Karachi whose emails are at their most hilarious when she talks about unrest in the city. ‘Keep calm and carry on…and remember the absurdity of life,’ so to speak. I hear police sirens several times an hour every day since the riots began. But in my tidy, suburban London neighborhood, the only sign of riots was the Sainsbury’s supermarket closing around 6pm instead of 11pm. I’m glad that when I moved back to London in 2008, this time to make it my home for a while, I had tired of living in urban centers and really wanted to plant a garden.

I’m at that age, so I imagine what it would be like to raise a child in most areas I like to spend my time in. One grows to love one’s home, no matter what. But in so many areas of London, you must develop defense mechanisms to reconcile the aesthetics of hopelessness and neglect with your life’s aspirations. You’ll eventually laugh at brand-dissonance between the McDonald’s at the end of the world and the ads you see about the chain on TV, you’ll love the dry meat curry at the Pakistani restaurant. You’ll hang something lovely on your wall to forget the black mold and the thin walls. You get used to the lack of insulation in winter. Then, London’s luxuries – the public parks, the free access to museums, hidden histories and so on – can unfold. But how fragile these defenses when something explodes. As a foreigner, I can always tell myself that I am just visiting. That my true home, the one I carry in my mind, is verdant, the air is salty and the bark of seals sings me to sleep.

Saskia Vogel is a writer and Granta magazine’s publicist. Visit her at SaskiaVogel.com.