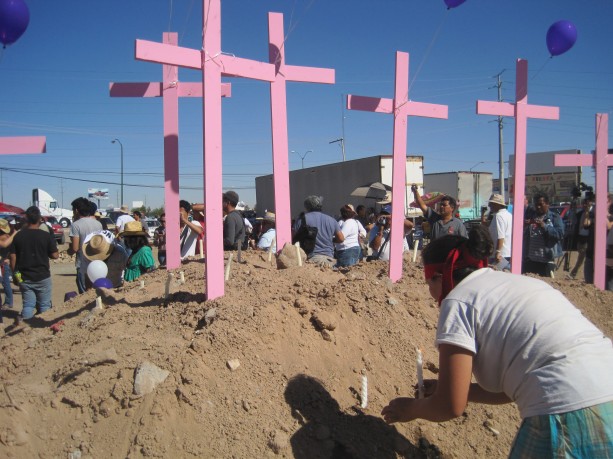 Being a war correspondent has its downsides. I’ve seen a headless body left hanging from an overpass at dawn, and covered several mass murders. At a drug rehab center I stood outside the tiny building where 17 people had been massacred on a sidewalk that was drenched in blood. I’ve talked to too many grieving victims of senseless violence, including parents of slaughtered children, and children of slaughtered parents. It all remains horrifying, trust me.

I realize there are plenty of journalists in places like Afghanistan or famine-struck Somalia who must bear witness to similar horrors, but they have to fly across many time zones to encounter them. What’s surreal about my reporting assignment is that I commute to it from America’s quotidian tranquility – sometimes I even swing by my Starbucks drive-thru en route to the war zone next door.

Indeed, I live in one of the safest cities in the United States – El Paso, Texas, had the lowest crime rate among large cities in CQ Press’ 2010 crime report – and work in one of the world’s most notorious murder capitals – Ciudad Juarez, Mexico.

The two cities have historically been intertwined far more than other major border communities. San Diego and Tijuana are divided by a large buffer zone, and San Antonio, which has long claimed to be the gateway to Mexico, is a two-hour drive away.

El Paso’s downtown runs right into downtown Juarez. For generations of families crossing the border into Mexico was like crossing the street and many did just that to shop, get a haircut or visit “abuelita.”

Drive down I-10 past the University of Texas in El Paso and there’s a clear view of Juarez neighborhoods. In Juarez players on soccer fields near the border can see the El Paso skyline just across the Rio Grande. Even at the big border fence on the outskirts of El Paso heading west into New Mexico, neighbors can hear each other’s dogs bark.

Juarez has long been a playground for Americans looking for freedom and thrills, and an edgier nightlife. But that has all changed, and it’s El Paso that’s becoming the exotic escape, for Mexicans seeking peace and safety. Security issues have altered the bi-national metropolitan area’s cohesion.

El Pasoans increasingly stay out of Juarez, and those who can leave Juarez increasingly flock to El Paso, and bring much of Juarez with them. Brand new restaurants seem to pop up every day in El Paso, except they’re more familiar than new. They’re the same places I frequented just across the border in Juarez before violent crime forced their closure and emigration, as their owners relocated to El Paso for safety and to cater to customers who are now too afraid to visit Mexico.

Over the summer I’ve also watched the construction of two private Mexican schools in El Paso. Wealthy Juarez families fleeing the violence will soon send their children to the same elite schools they attended back home before they moved. The Tecnologico de Monterrey just opened its first prep school in the U.S. and the Ibero Academy is now registering toddlers through 2nd grade.

To understand this transformation of El Paso and Juarez’s interdependence, all you need to know are two numbers: 3,097 and 5. The first is the number of murders in Juarez last year, as warring drug cartels fighting for lucrative smuggling routes to the U.S. turned the city into the Stalingrad of this conflict. The second number, 5, is the number of murders that took place in El Paso last year.

Why the stark divergence, the lack of spillover violence?

I get asked this question all the time. I’ve grappled with the answer for years. I’ve lived my life on both sides of the border. I was born in Mexico City and raised in Guadalajara until the age of ten. That’s when my family returned to the U.S., my mother’s native country. We moved to Texas even though her family is from Chicago and has been for generations.

I guess you could call me an American-Mexican. As a journalist I cover the drug war day in and day out with my colleague, photojournalist Hugo Perez. We work out of a border news bureau for Belo, a Texas media company that owns 20 TV stations and The Dallas Morning News. For me this is more than a newsy hotspot – it’s home.

Mexico’s President Felipe Calderon sent thousands of soldiers and federal police to restore law and order on Juarez streets, which created some lulls in the killings, but only for brief spells. The body count climbed each year. Kidnapping and extortion have also spiked. Carjacking is another threat.

On many days Juarez seems like a “normal” bustling border city with people going about their business. But there’s a new normal; everyone knows things can suddenly change. We’ve all learned to adapt to the risks.

While driving through Juarez Hugo and I roll down the lightly tinted windows of our dark blue SUV to make sure we’re visible. We don’t want young hit men looking for rival gang members to go after us by mistake.

We don’t want soldiers and police officers to see our vehicle and think we’re the hit men targeting them. People have been killed at checkpoints in the midst of confusion.

Many former Juarez residents who now live in El Paso keep a low profile when crossing back and forth for business or to visit relatives. “You use some little clunker to go to Juarez and come back, “explained Tony Payan, a professor at the University of Texas in El Paso who also teaches a class at the Universidad Autonoma de Ciudad Juarez. Even wealthy doctors who are frequently targeted by kidnappers use the clunker strategy.

Changing cars is one thing, changing your frame of mind is not as easy. After covering the bloodbath in Juarez at the end of the day I get to go home to peaceful El Paso with images and interviews still swirling in my head. I feel a sense of relief when I cross the border.

The remarkable safety of U.S. border cities continues to confound expectations (and at times, political rhetoric that assumes the spillover is already taking place). There are no gun battles raging on the streets of El Paso or car bombs like the one that blew up in downtown Juarez last year.

It’s not that the cartels don’t operate outside Mexico. These are transnational criminal organizations. Plus, plenty of U.S. citizens are involved in smuggling drugs into the country and running guns and cash into Mexico. The cartels regularly hire gangs with members on both sides of the border who exploit their connections to carry out hits.

The rule of law is one explanation for El Paso’s safety. “On the Mexican side, the institutions that should sustain a functioning rule of law, on the judicial and law enforcement sides, are either weak, corrupt or non-existent,” says Lucinda Vargas, one of the founders of Plan Estrategico de Juarez, an organization that fosters civic responsibility and respect for rule of law.

In the U.S. there’s the expectation that when there’s a crime, an investigation follows; there’s hope a suspect will be identified, caught, prosecuted and punished. In Mexico, impunity is a fact of life. And while Mexican authorities may dispute whether the 98% impunity rate that is often cited is correct, many people never see justice for their loved ones. Most people I interview complain they don’t even get a full murder investigation.

A journalist colleague of mine says in Mexico you die twice: first from the bullet or other lethal wound. Then there is the character assassination. It’s common for authorities to point out even before the investigation is complete the victim was likely “involucrado,” involved in organized crime.

In the U.S., known drug smugglers get their day in court. Last month, a federal judge in El Paso handed down two life sentences for kidnapping. According to prosecutors the victim was targeted because he lost a load of drugs when Border Patrol agents seized 670 pounds of marijuana at a highway checkpoint a month earlier.

The abduction happened in Horizon City on the outskirts of El Paso in broad daylight. In September 2009, the kidnappers dragged Sergio Saucedo out of his home as his wife and children watched. Youngsters riding past on a school bus also witnessed the abduction.

A few days later his tortured body was dumped on a street in Juarez. His hands had been chopped off and carefully placed on his chest, a message from drug traffickers indicating he was killed because he was a thief.

While some law enforcement and politicians sound the alarm about the threat of spillover violence, for many border residents, the debate rings hollow.

Consider Rueben Redelfs. Gunmen killed his brother Arthur Redelfs and pregnant sister in law Leslie on a sunny Saturday afternoon in March last year. Arthur Redelfs was a detention officer at the county jail in El Paso. His wife Leslie Enriquez Redelfs worked at the U.S. Consulate in Juarez. The couple had just attended a children’s birthday party.

On the way back home to El Paso, just blocks from the international bridge hit men sprayed their car with bullets. Their baby girl riding in the back seat survived the deadly attack.

“In my opinion the spillover has already happened,” Ruben Redelfs told me. “The grief is spillover.”

His words stayed with me long after our interview. On my drive home that night to El Paso’s west side I spotted another familiar restaurant from Juarez with an “opening soon” sign.