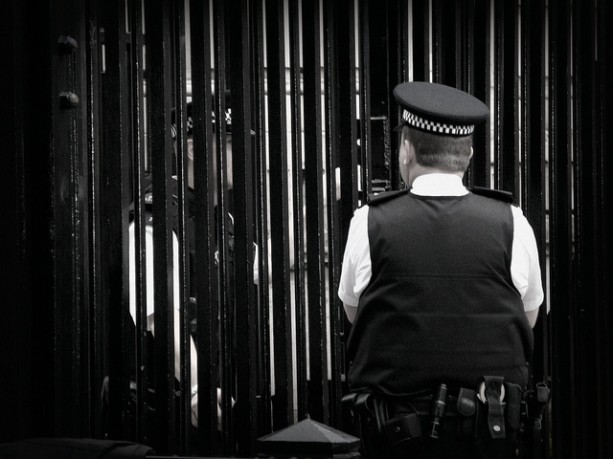 As some went to Europe to see the living past, so one must visit Southern California to observe the future.
– Alison Lurie.

The rioting, looting and clashes with police in London a few weeks ago were familiar scenes to Southern Californians who had lived through the 1965 Watts riots and the 1992 conflagration in South-Central. The London riots were sparked when police shot and killed a young black man in a gritty north London neighborhood, just as the last two major riots in Los Angeles were set off by incidents between police and minority residents.

In the aftermath of the worst rioting in decades, British Prime Minister David Cameron asked former Los Angeles Police Chief William J. Bratton to be an unpaid consultant. London’s Metropolitan Police is currently grappling with problems that the LAPD has contended with for decades: violent street gangs, a predominantly white force policing minority neighborhoods, claims of police brutality, and being woefully unprepared for urban unrest.

Cameron’s response to the London riots, which spread to other major cities in England, was criticized for being predicable and unimaginative. Reaching out to Bratton, however, was an insightful move. After the London riots, in which more than 1,200 people were arrested, it was clear that the Metropolitan Police, known as Scotland Yard, has much to learn from Los Angeles.

Bratton, who was chief in L.A. for seven years, has said that a key reason Cameron contacted him is because of the proliferation of street gangs that British police believe were instrumental in ratcheting up the violence during the unrest. Who better to give advice on gangs than a former chief in Los Angeles, the gang capital of the world? Los Angeles’ recent police history also could provide insight into how the Metropolitan Police, a department that is more than ninety percent white, can create better relations with minority communities. And the London police are facing the same criticism about use of excessive force that has been leveled against LAPD for decades.

A number of British politicians and police officials derided Cameron’s interest in Los Angeles and his proposal, since abandoned, to appoint Bratton for the vacant position of Metropolitan Police commissioner. Sir Hugh Orde, president of the British Association of Chief Police Officers told The Independent, “I am not sure I want to learn about gangs from an area of America that has 400 of them. It seems to me, if you’ve got 400 gangs, then you’re not being very effective.” London Mayor Boris Johnson, told the BBC in an interview, “The read-across from America to the U.K. is not perhaps as obvious as some people think. They have a murder rate in New York about four times the rate in London, the Los Angeles rate is even higher, the gang problem is considerably worse over there.”

Considering the obvious parallels between London and Los Angeles, and the LAPD’s recent improvement, these arguments come off as provincial and defensive. While Bratton headed the LAPD – from 2002 to 2009 – public support for the department soared among the city’s minority communities. Bratton also encouraged a radical transformation of the rank-and-file that began in the tumultuous wake of the 1991 videotaped Rodney King beating. At that time, the department was almost two-thirds white; today it is a little more than a third white. Violent crime dropped every year during Bratton’s tenure. While Bratton benefited from demographic forces that precipitated a crime drop in most major cities, there is no doubt that the computer-mapping crime-fighting system that he had employed as police commissioner in New York was also extremely effective in Los Angeles.

Most important, Bratton transformed the culture of the department, a culture that engendered a long history of enmity between the LAPD and minority communities. He integrated officers in the communities they patrolled, changed the way recruits were trained, and made it clear that the old ways of heavy-handed policing would no longer be tolerated. Still, there were some missteps along the way. He was criticized for spending an extensive amount of time away from L.A. on personal and business trips. And at a 2007 immigration rights rally at MacArthur Park, officers fired foam bullets and struck demonstrators and some reporters with batons. Community leaders were outraged. The old LAPD probably would have circled the wagons and exacerbated a combustible scenario. Bratton, however, acted decisively, demoting one commander, reassigning another, denouncing the officers’ tactics, and ordering new crowd control training.

London is not the only city in Europe facing tribulations comparable to what Los Angeles confronted decades earlier. In 2005, two French-born Muslim youths, who believed they were being chased by police, were electrocuted at a power station in a rundown Parisian suburb, which set off the worst riots in France in more than forty years. For three weeks, young people battled police throughout the predominantly minority suburbs, ringed by shabby housing projects, north of Paris. Two years later, after two minority teenagers died in a collision with a police car, riots erupted again, injuring almost 80 French police officers.

When Bratton was being considered for the job in Los Angeles, a number of LAPD and city officials opposed him for reasons similar to those expressed by his London critics. He was an outsider and the LAPD was a notoriously insular organization. Los Angeles had little in common with Boston and New York, where Bratton had previously served as chief. An Easterner could never understand the peculiar criminal culture of Southern California. Despite the skepticism, he was hired. Polls show most Los Angeles residents considered Bratton’s tenure highly successful. I think London, too, would benefit from Bratton’s insight and Los Angeles’ example.