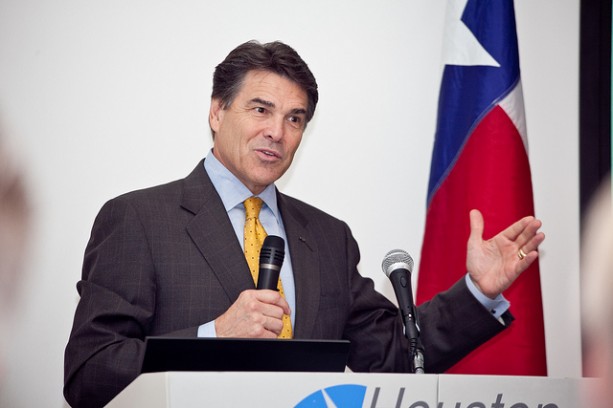 Texas Governor Rick Perry is the flavor of the month in the Republican presidential nomination. Depending on which political gurus you want to listen to, Perry’s candidacy will be just that, a flavor of the month imploding once his blustery persona and extreme views are subjected to closer inspection; or, alternatively, the unassailable front-runner, uniquely palatable to both social and economic conservatives within the GOP.

However his presidential candidacy turns out, he has already had a big impact on the brave new world of the Republican Party, in California as well as across the country.

The new era in California politics first came into sharp focus in September 2007. That’s when Governor Arnold Schwarzenegger, having won re-election by a 17-point landslide margin 10 months earlier, decided to level with his fellow Republicans at their state party convention outside Palm Springs.

Schwarzenegger, alarmed by the ever rightward drift of his party despite his two landslide elections while running to the center in 2003 and 2006, went to the California Republican Party convention on a Friday night at a luxury resort hotel in Indian Wells. There, he challenged the growing far right orthodoxy and warned Republican activists that they risked making the party irrelevant in California statewide elections unless they recognized that the center of gravity was closer to the center than to the far right.

Schwarzenegger used a customary Hollywood metaphor to note that California Republicans were “dying at the box office,” and invoked the pragmatism of Ronald Reagan, the patron saint of today’s right.

Here is what Reagan, then the new and “surprisingly” pragmatic governor of California, said to a party group 40 years earlier, speaking of the dangers of hyper-partisanship: “Because this is the great common denominator – this dedication to the belief in man’s aspirations as an individual – we cannot offer them a narrow sectarian party in which all must swear allegiance to prescribed commandments. Such a party can be highly disciplined, but it does not win elections. This kind of party soon disappears in a blaze of glorious defeat, and it never puts into practice its basic tenets, no matter how noble they may be.”

I was on hand for Schwarzenegger’s speech to the convention. The reaction of most delegates can best be described as tepid. At best. Schwarzenegger’s speech was followed immediately by Rick Perry, who not long after Barack Obama’s election became notorious for urging that Texas secede from the Union. I stuck around for Perry’s talk, curious to compare the response he received to that accorded to Schwarzenegger.

The difference was striking. Perry gleefully countered everything Schwarzenegger had to say, insisting on a hard partisan course, denying the human role in climate change, decrying more spending on infrastructure and education as big government run amok, insisting that tax cuts and regulatory rollbacks were the way to go. The Republican delegates loved Perry’s take-no-prisoners bravado.

The GOP’s true believers were totally unfazed by the fact that Schwarzenegger had won a 17-point landslide re-election victory over Democrat Phil Angelides, matching his 17-point landslide victory in the 2003 California recall election as the biggest California Republican victory since Governor George Deukmejian beat Los Angeles Mayor Tom Bradley in his 1986 re-election campaign.

I talked with some of the delegates about the practical implications of embracing dogmatic conformity, and most simply didn’t care. Perry was telling them what they wanted to hear, echoing the rhetorical flourishes emanating from right-wing radio shows, blogs, and the Young Americans for Freedom alums elected in gerrymandered state legislative districts.

The day after the Republican gathering, I happened to watch John McCain give a luncheon speech as he worked to reboot his fledgling presidential campaign – a speech in which the Arizona senator talked about the need to take on greenhouse gases. This wasn’t that long ago, but it might as well have been a different age, given how heretical it would now be for a leading Republican contender to take on that subject.

Jerry Brown and I talked in those days. The then former governor and presidential candidate-turned-state attorney general made it clearer than ever that he was thinking of running again for governor and wondered about the bottom line on the California Republican convention and Schwarzenegger’s attempt to move the party toward the center.

The bottom line, of course, was clear: Schwarzenegger’s attempt to move his party away from the far right had already failed. Republican legislative caucuses, already moving hard right, would move further to the right. Even his then friend and ally, Insurance Commissioner Steve Poizner, a Silicon Valley entrepreneur and fellow centrist who was the only other Republican elected statewide in 2006, was moving way over to the right at that convention. Future Republican candidates would have to kowtow to a militant ideological rigor. That is what gave Brown the tremendous opening to run for governor from the center/left in 2010, and to prevail against one of the best-funded candidates in U.S. history.

As expected, any candidate who made it through the Republican primary had to take on hard right positions problematic in a general election. That reality applied even to billionaire Meg Whitman, who identified with Perry and his Texan ways. While Schwarzenegger, with no love lost for the Texan, eschewed what would have been his customary gubernatorial bet on last year’s World Series between the San Francisco Giants and the Texas Rangers, Whitman was all too eager to take on the ceremonial betting role herself.

Whitman bet Perry, whose Texas administration she repeatedly praised as a model venture, a California surfboard against a pair of Texas cowboy boots. Hey, she lost the election in a landslide, but she got a pair of boots.

As for Perry, he is the darling of moneyed California conservatives. His so-called “Texas Miracle” is a cult item for Golden State conservatives, who are as unfazed by his characterization of evolution as “a theory that is out there” as they are by his choice of the “Red State” bloggers conference in Charleston, South Carolina, the place where the Civil War began, to launch his campaign to become the Party of Lincoln’s next presidential nominee.

The right-wing governor of Texas, not Arnold Schwarzenegger, is the real personification of California Republicanism, and the brand of uncompromising politics so familiar in California’s capital which has burst onto the Washington scene in such dramatic fashion this year.

The ascendance of his politics all but guarantee that Republicans can’t win statewide in California, even if our constitutional system gives them the power to inflict substantial gridlock from their doctrinally pure barricades.

California Republicans clearly feel that is more satisfying than governing. In assessing Perry’s candidacy, Republicans across the entire country will have a chance to make, or reject, the same choice.

William Bradley is a California-based political analyst and writer for NewWestNotes.com.