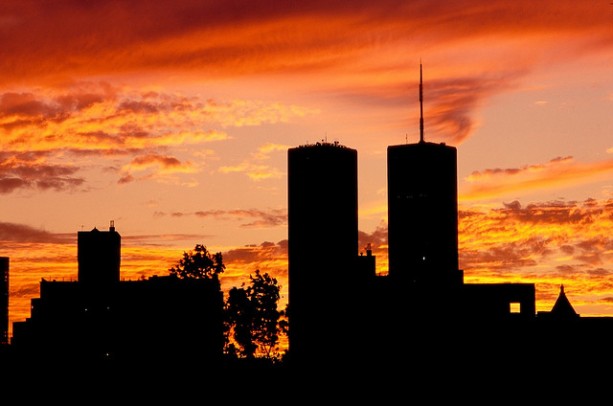 September 11th was the only day I was ever invited to breakfast at Windows on the World, atop New York City’s World Trade Center. I had no intention of going, mind you. The invite had been extended offhandedly the prior evening by Neil Levin, executive director of the Port Authority of New York & New Jersey, builder and owner of the Twin Towers and operator of the metropolitan area’s three major airports.

On what turned out to be the last afternoon of his life, Levin was enthusiastically guiding me around John F. Kennedy Airport’s renowned Terminal 5, the modernist, curvy masterpiece Eero Saarinen designed for TWA. By 2001, Terminal 5 stood as a quaintly-sized monument to a more glamorous age of air travel. Airport authorities wanted to preserve the structure but build a larger facility around it; historic preservationists, still haunted by the demolition of the old Penn Station, wanted the Port Authority to keep using the former TWA facility, unmodified. Levin’s mission that day was to convince me and my fellow New York Times editorial writer Verlyn Klinkenborg that these preservationists were not being reasonable.

It all made for an interesting, and rare, Monday afternoon field trip. Not once did we ask anything about security. Why would we? It was 9/10.

My two most surreal memories of the day that followed – bookends to the nightmare, really – are set in Times Square.

Upon first hearing the confused news reports that morning, I scrambled from my place uptown to make it into the Times building and found myself crossing Times Square at the moment the first tower collapsed. Standing with me was an impressive cross-section of humanity – French tourists, Middle Eastern breakfast-truck operators, pretty Condé Nast girls, swarms of salaried white-collar workers for whom work no longer mattered, sailors on shore leave, street performers – looking up at the jumbo screen attached to the ABC/Good Morning America facility, with the unflappable Peter Jennings manning his desk to host what seemed like the end of the world.

As the tower collapsed, the entire lower portion of our city (where my wife and countless friends worked) vanished from sight in a mushroom cloud. On Times Square, the multitude of former strangers (there is no such thing on a day like that) didn’t scream; it was more like one collective gasp emanating from thousands simultaneously punched in the gut. I recall a feeling of watching myself watch all this, almost like an extra in one of those Hollywood apocalyptic flicks where New York gets wiped out before the good, God-fearing folks in the rest of the country prevail against the aliens/natural disaster/bad guys.

I spent the next 14 hours scrambling with colleagues at the Times to make sense of the day (my wife did reach me around noon, alive and well), an exercise which seemed both essential and pointless. Did New Yorkers really need to wait for the Times editorial page to let them know what to make of that day? Kudos to Verlyn, though, for writing the pitch-perfect opening sentence to the lead editorial published on 9/12: “Remember the ordinary, if you can.”

I was still stuck on airport duty, though no longer on terminal aesthetics. I was cramming to learn everything there was to learn about airport security and unheeded warnings. The entire aviation system was grounded, would be for days, and the debate about what it would take for planes to fly again – and for a return to normalcy, more broadly speaking – was only starting.

Ten years on, it’s hard to remember – even for those of us who lived in New York – just how shell-shocked we were, and just how different everything did feel, for a time. There was the smell, for one thing. People describe it in different ways, but to me the city smelt of burnt plastic for weeks. And then there was the sense of solidarity, akin to what you read about in London during the Blitz. New Yorkers were suddenly, exaggeratedly, considerate towards each other, in the street, in the subway, at their workplaces.

What’s more, we all wanted to huddle together, all the time. My memories of those days and weeks are of crammed bars, restaurants and cafés, TVs blaring the latest news as if tuned to the World Series. No one wanted to go home, because that would mean having to absorb all this alone.

If there were a Geiger counter to measure social cohesion in those days, the needle would have been stuck at the height of the scale. We were one. For the moment, there was no room for partisanship or race or class or creed. It was – dare I say it? – beautiful.

In that moment, you may recall, there was talk about how there was no going back to 9/10, about how we would no longer be a frivolous, petty society-as if the attacks had been a punishment meted out by deities upset by our sudden devotion to reality TV shows. Writing in Time shortly after the attacks, Roger Rosenblatt noted, “One good thing could come from this horror: it could spell the end of the age of irony,” the period when America’s chattering classes had refused to take anything seriously.

Reed Johnson captured the zeitgeist in a Los Angeles Times story published 12 days after the attack in which he quoted Jedediah Purdy, the brilliant young author of a book assailing irony (and then a fellow at my current employer, the New America Foundation), as saying it was “amazing to see how in these past few days we – who have been so used to living with our selves front and center – are suddenly all aware that a common condition comes first. We have not been flip, self-involved, needlessly sarcastic or focused on small divisions. We have been working for ways to help. All of us. That is new to us.”

It is hard in retrospect to track the erosion of this exceptional moment of solidarity and purpose. It wasn’t bound to last forever, of course, and the ensuing revelations of fraud on Wall Street and at companies like Enron and the debacle of the Iraq war left many Americans justifiably embittered. We also began to see that the so-called War on Terror would not, after all, require a massive mobilization of society a la WWII.

We have since returned to petty self-indulgence – be it in our pop culture or in our hyper-partisan politics – with a vengeance. Oh, and when we fly, we grumble at having to take our shoes off at security. In short, to cite Verlyn again, we did a pretty good job of remembering the ordinary.

Still, thank God for that. The spirit of 9/12 and the ensuing weeks might have been beautiful, but it was not our natural state, either as Americans or humans, and it’s too horrifying to contemplate what it would have taken to keep us in such a state of empathetic solidarity for long. Who we were on 9/10 is who we are today, and who we were on 9/12 is almost impossible to reconstruct in our own minds.

But back to the day itself, and my second surreal memory of Times Square. It was late at night as I crossed Broadway again, and, this time, for the only time in my life, I had all of Times Square to myself. No tourists were milling about; no theater-goers; no late-night revelers; no harried lawyers or accountants rushing to catch their train home. The iconic heart of the city was deserted.

Only when I walked up to 45th Street did I realize there was another human out and about, an enterprising immigrant who’d set up a display of touristy pictures to hawk to non-existent pedestrians. They were watercolors of the Twin Towers.

“I am usually located in Battery Park,” he offered by way of an explanation, if not an apology. I reflexively bought one–would even have bought two if he’d taken a credit card (that negotiation must have been my first “normal” exchange of the day), so desperate was I to preserve the image. Maybe even the moment.