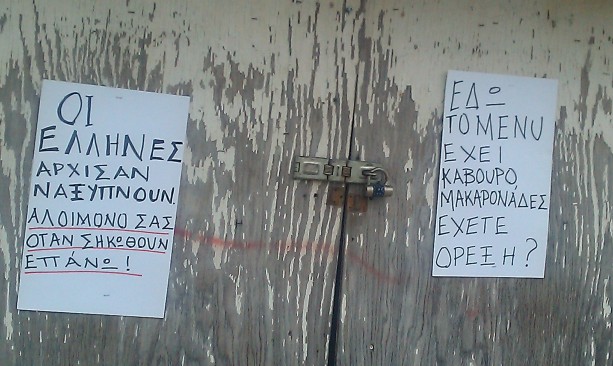 It was nervous laughter, the kind you might get when making fun of your mother without knowing she’s in the room. The kind that often leads to trouble.

The jokester was the comedian Angelo Tsarouchas and the mom being made sport of–to her face, in front of the church–is a battered old woman in mourning black named Helen:

“Greece doesn’t have a debt crisis,” dead-panned Tsarouchas, dangling the bait. “Germany does …”

After all, said Tsarouchas, a Greek-Canadian, the Germans are the ones owed more than 300 billion Euros.

Tsarouhas came to Baltimore this summer to play the annual St. Nicholas festival in the city’s Greektown neighborhood on the far southeast side of town, just before the county line.

The enclave four miles east of downtown has long been Baltimore’s portal for immigrants. There was the turn-of-the-century surge of Germans, the landing of Polish and Italian families between the World Wars, a mild Middle Eastern influx in the 1990s, and the current wave of Hispanics. Greektown was where they became American.

My Italian grandmother landed there via Pennsylvania when the neighborhood was known as “the Hill,” and a streetcar called the Red Rocket ran laborers out Eastern Avenue to the Sparrows Point steel mills and shipyard.

It was at her sister’s boarding house that Frances Prato met one of those Bethlehem Steel mill workers, a seaman who landed in Baltimore from Galicia, Spain in 1925 as a coal tender on an English freighter.

I am that gallego’s namesake grandson and live in the house where Ralph and Frances raised their children a short two blocks from the street festival where the cheeky Tsarouchas poked fun at his own people.

“Maybe we should collect royalties on all the words we’ve given the world,” he reasoned. “That ought to be worth at least $45 billion.”

Greeks in Greece may owe, but the Greeks in Baltimore own.

Much of Baltimore’s wealth is held by a handful of Greek Americans whose parents arrived early in the 20th century to hack out a new life. Men like Peter Angelos, asbestos litigator par excellence and the considerably less successful owner of the once-great Baltimore Orioles. (The team’s decade-and-a-half long status as an American League doormat is almost universally blamed on Angelos.)

At the top of the ladder is John Paterakis, who turned his immigrant father’s bread business–H&S–into the largest privately owned bakery in the United States.

The children of such men, and their less wealthy compatriots, who may own but a single diner or a home contracting business, inevitably go on to college degrees even if they only come back to the diner to work side-by-side with their old man at the grill.

Of all the ethnic groups who have passed through “the Hill” (it wasn’t known as Greektown until the 1970s, which for years agitated some of the lingering Italians), none left their mark as indelibly as the Greeks, who continue to trickle in.

It’s the stamp of dour faces in the men-only coffeehouses where aging, old country toughs gamble at backgammon and cards on felt-covered tables. The scent of fresh basil given out each September 14 on the Feast of the Cross at St. Nicholas Greek Orthodox Church, in front of which Tsarouchas performed.

(The big man got bigger laughs with jokes about his wizened grandmother than wisecracks about Greek “accounting” practices. He later noted that the ancient Greeks defined comedy as truth plus time. With the Greek economy in an entrenched crisis, not nearly enough time has passed to make it really funny.)

And it is shared with the rest of the metropolitan area through the delicacies of calamari, dolmades and grilled-atop-an-open-flame Chesapeake Bay rockfish at a half-dozen restaurants.

Ikaros, which opened in 1969, is the oldest and best-known of the neighborhood restaurants. 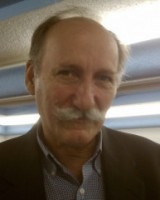 “Are the Greeks responsible for their misery or is the EU responsible?” asked Ikaros’ owner and maître d’, Xenos Kohilas, whose original oil paintings line the walls. “I hear about it every day, every hour.”

Kohilas heard an earful earlier this summer when, at the request of the American Hellenic Educational Progressive Association, Ikaros hosted a luncheon for a representative of the Greek embassy in Washington.

The guest-of-honor was Greece’s defense attaché, Colonel Taxiarchis Sardellis. Though Sardellis’ expertise is not economics, the debt crisis dominated conversation among some three dozen locals, many of them businessmen.

As the meal wore on, questions about the debt crisis–was the Greek government misled when they accepted loans they couldn’t pay back and how, exactly, was the money was spent?–turned toward narrow self-interest.

“People wanted to know if their land back in Greece was safe or if it was going to be taken from them,” said Jason Filippou, an official of the Greektown Community Development Corporation who attended the lunch.

One of the neighborhood’s younger leaders at 30, Filippou said being known as the world’s dead-beat–rightly or wrongly–is a colossal embarrassment to traditionally self-reliant Greeks. Photoshopped images of the German flag flying over the Acropolis, he said, are nauseating.

As is the notion that Greece is nothing more than one big Aegean swimming pool with great food for tourists from the more affluent countries of Europe.

“Being Greek is something to be proud of, that pride is instilled in you from birth, and it’s something we like to show off,” said Filippou, whose family comes from Rhodes and owns property there.

“You wake up one day and Greece is the punch-line to late night TV jokes, it pisses you off … this is a black mark on what it means to be Greek.”

There is a marked difference between Greek Americans, the ambitious, work-your-ass-off-to-make-it kids of immigrants and their laid-back counterparts back in Greece. But more so, said Filippou, is a divide between the generations of Greek Americans in Baltimore.

“My generation can’t afford to pay too much attention to what’s going on back home because we’re working to make it here,” said Filippou, who hasn’t been back to Greece in five years.

Yet Kohilas, the restaurant owner who is Filippou’s elder by several decades, a thoughtful man who has long sported the traditional, wide Greek moustache of bouzouki players, advised that paying more attention to Greece is exactly what the world needs to do.

“Whatever occurs in Greece slowly takes [concrete] form and is followed by others,” said Kohilas as another platter of braised lamb with string beans in tomato sauce left the kitchen.

“Historically, whatever happens to Greece happens to the rest of the world.”

Rafael Alvarez is a short story writer in Baltimore and Los Angeles. He is the author of the “Orlo and Leini” stories.