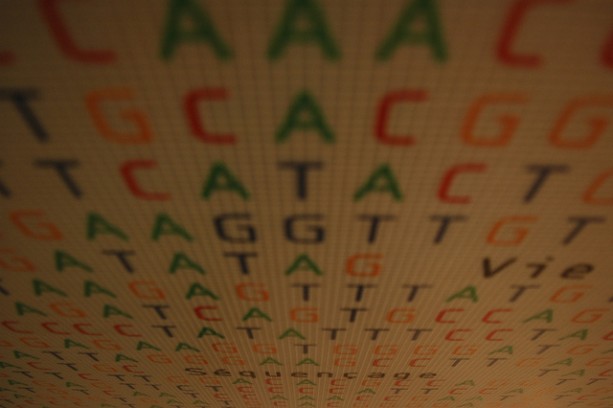 One reason our genes scare us is that they might be hatching a plan to kill us. For some reason, though, when I had my genes tested I thought as much about it as I did of getting a flu shot. My gynecologist had recommended it, after all. With two pulmonary emboli in my dad’s medical history and a possibly blood-clot-related miscarriage in my sister’s background, I was a natural candidate to be tested for a similar propensity for blood clots. So I offered my vein.

A few weeks later, I learned that I do indeed carry the genetic marker for blood clots. That was pretty big news. It has affected a lot of my health decisions in the years since: everything from how long I sit still on airplanes to how I’m treated after surgery. I’m always sure to tell doctors before I have any medical procedure. It’s amazing how quickly they forget.

Genetic testing is both a blessing and a curse, and you don’t have to look far to see how deeply it taps into our fears. Just think of Ethan Hawke as the genetically inferior Vincent Freeman in the dystopia Gattaca or the nightmare of Margaret Atwood’s Year of the Flood.  Less far-fetched, but no less frightening to many Americans, is the fear that insurance companies might be unwilling to cover us if we’re known to be high-risk candidates.

So how scared should you really be?

The good news is that health insurance should no longer be a problem. Since 2008, the United States has had a law, the Genetic Information Nondiscrimination Act (GINA), which bans most forms of genetic discrimination. Signed by President George W. Bush in 2008 and implemented in 2009, GINA prohibits health insurance companies and employers not only from discriminating based on genetic mutations but also from asking you for any information about them. GINA also makes it illegal for health insurers to treat your genetic test results as preexisting conditions and for your employers to take them into account in any way.

So far, it seems to have done the trick. Prior to passage of GINA, the Center for Responsible Genetics, a genetic privacy advocacy group, catalogued 500 different cases of alleged genetic discrimination in which people had lost health insurance or employment because of genetic predispositions rather than actual illnesses. Since GINA went into effect, only one such challenge has been made, at least according to what I was able to find.

Still, laws are only as good as their enforcement, and GINA still leaves other stuff to worry about. Although it covers people with group or individual insurance, GINA does not protect people in the military, people covered by Indian Health Services, or federal employees who are covered by Federal Employees Health Benefit Plans. It also doesn’t cover genetic discrimination in life insurance, long-term care insurance, or numerous other areas where information about your genes could be used against you.

This sort of thing scares people, and, according to Ellen Andrews, a Yale-trained geneticist and executive director of the Connecticut Health Policy Project, they suffer genuine health consequences. “People are avoiding getting tested,” Andrews told me. “And they are not getting the care they need.”

But there’s a second worry people have about genetic testing: that it’ll be like a crystal ball, revealing futures that they’d rather not see.

This is why anyone worried about or interested in the issue should see a genetic counselor. That’s an expert who provides people with advice on how to use-or not to use-genetic information in their treatment.

One of the first things genetic counselors will tell you is that most fears over genetic discrimination are media-generated. Whatever the scale of the problem, it’s smaller than many people fear.

Genetic counselors will also tell you that some things are worth testing for and some are not. For instance, if a woman has the BRCA gene mutation for breast cancer, she can reduce her risk of developing the disease by 96 percent if she does preventative treatment, said Shelly Cummings, a genetic counselor with Myriad Genetic Laboratories. That’s worthwhile. On the other hand, if you’re just interested in a general fact-finding mission, genetic testing probably doesn’t do much good at all-and it’s pricey.

Finally, genetic counselors will remind you that a genetic predisposition is almost never a sentence. In the case of BRCA gene mutations, only a small percentage of women who have the mutation will develop breast cancer. Similarly, although I have what’s called the “factor V Leiden mutation,” which makes me more susceptible to blood clots, it doesn’t mean I will get a blood clot-especially if I take care of myself, exercise, don’t smoke, and don’t take hormonal birth control. Plus you might have other genes that are counteracting the genes you’re testing for.

Of course, in some rare cases, knowing about your genes really is a crystal ball. We now have the capacity to test for Huntington’s disease, a neurodegenerative disorder that is created by a dominant gene. If you have the gene, you’ll get the disease, and there’s a fifty-fifty chance you’ll pass it onto your offspring. But that’s all the more reason to see a genetic counselor and figure out for yourself whether such knowledge is really something with which you can live.

If you do decide to go ahead and get a genetic test, go out and buy life insurance and long-term care insurance first. That’s what Steven Murphy, a doctor geneticist in private practice in Greenwich, Connecticut advises his patients to do. “I tell them that before I even make much of a note in their records,” he says. That way, your genetic results can’t be used against you.

And make sure you know how your medical information will be stored. Your healthcare providers and genetic counselor can help you get the answers to some important questions about this: Is it stored electronically or in hard copy? For how long? Will it be linked to your siblings or children’s medical records-and, if so, how?

If you’re still worried, you can pay for the test yourself and keep it totally confidential by paying for it out of pocket. The advantage, of course, is that you can get the information you need while securing complete control of your records. On the other hand, such a thing can be expensive-about $4,000-and your results can’t do you much good if they aren’t part of your record.

Ultimately, whatever you decide to do about controlling your genetic information, the really scary thing shouldn’t be genetic discrimination. It should be old-fashioned health discrimination. Robert Resta, a genetic counselor at the Swedish Medical Clinic in Seattle, summed it up well. “If you get cancer, insurers don’t care about genetics anymore,” he said. “It’s the cancer that becomes the issue. It becomes the preexisting condition, and they can do whatever they want on that.”

GINA doesn’t protect me from a health insurer dropping my coverage or raising premiums if I develop blood clots. My health insurance, your health insurance-it’s all based on the idea of underwriting. As Cummings told me, “The business of insurance is discrimination.” That’s been the heart of the matter for a long time-the health problem we’ve remained unable to fix. And, for most of us, it’s a lot scarier than visions of Gattaca.

Heather Boerner is a health writer in San Francisco.