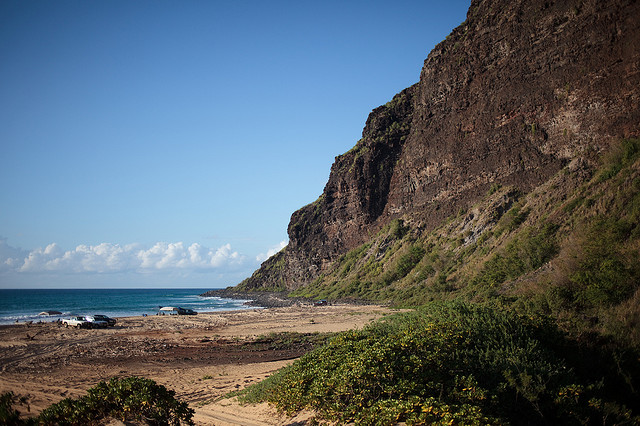 The sun-washed Polihale State Beach Park in Kauai seems an unlikely place to see the changing face of governance, but there we catch a glimpse of the new relationship forming between governments and citizens–one that is more participatory and inclusive.

While Polihale is formally a Hawaiian state park, its main feature is a 12-mile strip of beach, which sits just below the Na Pali cliffs in the southwestern portion of the island. Its remoteness and terrific surfing waves have made it a popular tourist spot.

When a tropical storm blew through the island in December 2008, it washed out most of the two-mile road that snakes from the old sugar cane fields near the park entrance to the magnificent beach, which included a couple of bridges and other facilities. Within a few weeks, the state’s Department of Land and Natural Resources (DLNR) sent out a team of engineers to assess the damage and devise a solution.

By February, the DLNR was ready to return to Polihale and conduct a public workshop to discuss next steps with the community. Officials from the Department announced that reconstruction would cost $4 million and take more than a year to complete. Even this estimate seemed optimistic, given the state’s cash-strapped condition. Local resident and surfer Bruce Pleas, who attended the meeting, worried, “The way they are cutting funds, we felt like they’d never get the money to fix it.”

This is where the story often ends when it comes to tackling an expensive local project. There’s not enough money. The project is complicated and will take too long. Nothing happens.

But there is a better way to think of such a predicament: as a golden opportunity.

With fewer financial resources available to government agencies, individual citizens have an opportunity to take action and tackle big problems themselves. At the same time, local governments have the opportunity to improve public service delivery, increase productivity, and reduce costs.

This is what happened in Kauai, but not at first.

In the immediate aftermath of the storm, community residents–including many who depend on the park for their livelihood–were bewildered by the news that the park would be closed for a year or more. The best that representatives from the DLNR thought they could do was to speed up reconstruction by several months with monies from a proposed “Recreational Renaissance Fund” that sat in the State Legislature. The state advised community members to “participate” by calling their elected representatives to demand they pass the measure.

As DLNR’s chairperson Laura Thielen noted at the time, “We are asking for the public’s patience and cooperation to help protect the park’s resources during this closure, and for their support of the ‘Recreational Renaissance’ so we can better serve them and better care for these important places.”

The government’s response was typical of that of many large institutions–public, private, nonprofit–facing a crisis: to look inward (at internal resources and capabilities), or to look up (to higher levels within the organization for financial or logistical support). Citizens become a “mass” to be lobbied in order to pass spending measures. However, as revenue-challenged governments seek to deliver consistent levels of service, many are recognizing the importance of looking out (to citizens and civic organizations) for support. This is what the DLNR missed. To put it mildly, the DLNR’s approach did not sit well with residents.

As Ivan Slack, co-owner of Na Pali Kayaks, which promotes tours of the coastline, put it: “If the park is not open, it would be extreme for us to say the least. Bankruptcy would be imminent.”

So it was Slack who led a group of his fellow residents to compose their own plan to open the park earlier. The DLNR’s initial review suggested this was no simple beach cleanup, but rather a significant construction project that included bridge building, road grading, and reconstruction of bathroom facilities.

In response, local residents donated materials and poured their own construction and engineering expertise–along with good old-fashioned blood, sweat, and tears–into this mammoth undertaking. Kids cleared brush and local restaurant owners brought in food, while volunteer construction crews worked heavy equipment in bridge and bathroom construction. After hundreds of volunteer work hours, the project–originally forecast to take nearly a year to complete–was finished within three weeks.

As Troy Martin of Martin Steel, who donated about $100,000 worth of steel, described it, “We shouldn’t have to do this, but when it gets to a state level, it just gets so bureaucratic; something that took us eight days would have taken them years. So we got together-the community-and we got it done.”

It would be easy to dismiss this story (or even appreciate it) as anomalous, but those who work with local governments know that it is a window through which one can see a new relationship developing between stressed local governments and citizens.

The core of that relationship: a government in this era does not exist to tell citizens what to do. It is there to act as a partner, convener, catalyst, and facilitator of structured discussions in order to solve public problems. For many local governments, budget cuts–which began with the proverbial “waste, fraud, and abuse”–have moved into more significant territory. Public services, from libraries to parks to schools, are on the chopping block.
As this happens, far-sighted municipal leaders are going beyond “cut/keep” decisions–and involving their communities directly in maintaining some level of public offerings. As a result, not only are services improved while costs are reduced, but citizens are being called upon to reconsider their role in their own governance and to take action to build stronger communities.

The lessons of Polihale State Beach Park could not be more relevant in California, where governments are reeling from the ongoing financial crisis. And they are already being learned. A new report from our organizations, Golden Governance: Building Effective Public Engagement in California, shows how many of the state’s civic leaders are already responding to the lack of resources by creating revamped, mutually owned governance structures.

David B. Smith is executive director of the congressionally chartered National Conference on Citizenship. Pete Peterson is executive director of Pepperdine University’s Davenport Institute for Public Engagement and Civic Leadership. Their report, Golden Governance, which was commissioned by California Forward and the Center for Individual and Institutional Renewal, will be released at an upcoming Zócalo Public Square event in Palo Alto.