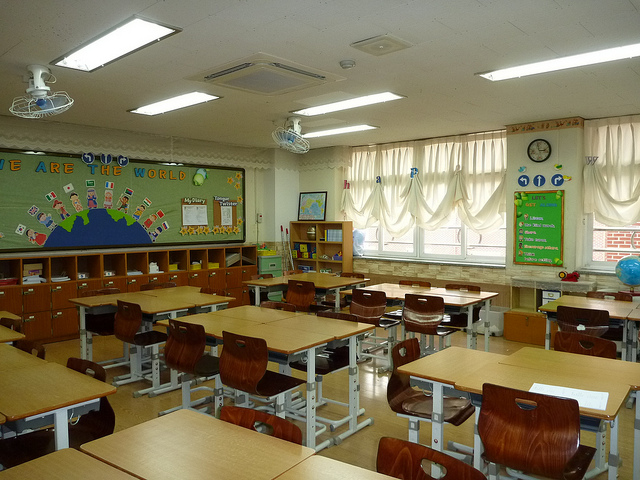 America’s public education system is foundering. U.S. test scores in most subjects are significantly lower than those of students in other developed countries: “The brutal truth [is] that we’re being out-educated,” U.S. Education Secretary Arne Duncan has said. But more often than not, the search for solutions is bringing teachers, policymakers, administrators, and parents into conflict rather than bringing real change to the students who need it most. Media mogul and writer Steven Brill visits Zócalo to discuss how much of the blame rests on the shoulders of teachers’ unions, and to offer his own prescription for how to save the country’s public schools. The following is an excerpt from the first chapter of Brill’s new book, Class Warfare: Inside the Fight to Fix America’s Schools.

As he filed into the Oval Office behind the power players who were already household names in Washington-top presidential adviser David Axelrod, chief of staff Rahm Emanuel, and Secretary of Education Arne Duncan-Jon Schnur thought that he had spent years waiting to have this meeting.* Until now he had been jilted. The Democrats he had worked for had always backed away from the education reforms he championed. And they hadn’t been elected.

Schnur, then 43, got interested in education when, as an editor of his high school newspaper, he read a draft of an article by a student who had transferred from a Milwaukee public school to his school in the city’s suburbs. “She was savvier than any of us on the editorial board, but the draft was just so terribly written,” he says. “The more I got to know her, the more I became obsessed with why public education hadn’t reached people like her.”

After he graduated from Princeton, where he had volunteered as a tutor in a nearby high school, Schnur worked in Bill Clinton’s presidential campaign, then landed an education policy job in his administration.

That was when Schnur started to distrust his assumptions about why American public education had collapsed to a point where it was an obstacle to the American dream rather than the enabler. As he studied research trickling in by the late 1990s, he began to believe that failure or success in America’s schoolrooms, especially in its poorest communities, didn’t depend mostly on what kind of home a child came from or whether the school had enough resources, which is what most liberals like Schnur had always assumed. Instead, he concluded, it had to do more with the teacher in front of the class. Truly effective teaching, he came to believe, could overcome student indifference, parental disengagement, and poverty-and, in fact, was the key to enabling children to rise above those circumstances.

However, as the studies and the reports from a new kind of public school called “charter schools” were finding, successful teaching was grueling work. It required more talent, more preparation, more daily reevaluation and retooling, more hours in the class day, and just plain more perseverance than many teachers, and most teachers’ union contracts, were willing or able to provide. In Schnur’s view, the unions and those who ran the nation’s increasingly bureaucratic school systems had settled on low expectations for children, which allowed them not to be held accountable when the children continued to fail. Change those expectations; put good, determined teachers and principals in there; retrain or, if necessary, remove those who were not effective; and “demography will no longer be destiny,” Schnur and his fellow reformers believed. That presented a dilemma if you were a Democrat, because the Democratic Party had come to rely on teachers’ unions as its strongest base of support.

By 1998, Schnur was Vice President Al Gore’s education policy aide. During his boss’s 2000 presidential campaign, he persuaded Gore to give a speech to the Michigan teachers’ union about the need to pay teachers based on how effective they were in boosting their students’ performance, an idea that struck at the core of union contracts that mandated lockstep compensation based only on how many years a teacher had been teaching, or what graduate degrees the teacher held.

Gore hadn’t flinched. He hadn’t even tinkered with some of the language that Schnur had made tougher in anticipation that the vice president or someone else would water it down.

Right after the speech, the air came out of Schnur’s balloon. Within days, the two national teachers’ unions-which donate three times more money to Democrats than any other union or industry group and whose members account for more than 25 percent of all union members in the country and 10-15 percent of the delegates to the Democratic Party convention that chooses the presidential nominee-had complained to higher-ups in the Gore campaign. Without anyone’s informing Schnur, Gore’s education reform positions disappeared from the campaign issues material. Gore never again mentioned teacher quality in his campaign, or any of the other education reforms that Schnur proposed. In the presidential debates between Gore and George W. Bush, the Texas governor talked about how he had pushed to make his state’s schools and their teachers accountable for performance by requiring all students to be tested so their progress could be measured. Gore said testing by school systems should be voluntary and called for more federal aid to hire more teachers and pay them all more.

Four years later, Schnur signed on to help John Kerry, who as a senator had taken an interest in education reform. He drafted policy papers and a speech or two. The Kerry 2004 presidential campaign used none of them.

Now, as he took his seat on a sofa near the fireplace in the Oval Office, Schnur recalled how Obama ’08 had been completely different. Since coming to the Senate in 2005, Barack Obama had been talking about education in ways that would have alarmed the teachers’ unions, if they had cared enough to notice what a junior senator was saying. In 2006, he introduced legislation to provide federal aid to school districts that initiated reforms, such as linking teachers’ pay and promotions to how well their students advanced on tests during the school year. The legislation went nowhere. And just two days after he announced his presidential candidacy, on a swing through Iowa to compete in the state’s bellwether caucuses, he had answered a question about increasing teachers’ salaries by saying that, yes, teachers should be paid more but that “there’s also going to have to be accountability,” and that students’ performance on standardized tests “has to be part of the mix.”

“Such candor is refreshing,” David Yepsen, the influential political columnist for the Des Moines Register, wrote the next day, adding that he had asked Obama after his talk if a “candidate can win if he tells Democratic constituency groups things they don’t want to hear.”

A few weeks after Obama’s comment in Iowa, Schnur and campaign issues director Heather Higginbottom had presented him with an eight-point education reform platform. Higginbottom, then 38, had been Senator John Kerry’s legislative director and then his issues director in his 2004 presidential run. So she and Schnur were longtime collaborators, and education reform was her favorite issue, too. Perhaps because of the disappointing experience in the Kerry campaign, when education reform had been trumped by the political team’s fear of the teachers’ unions, they were apprehensive that Obama might cut out or water down one or two of their most union-offending ideas.

Obama signed off on all eight points with little discussion, other than to tell them, “This is what I’ve been saying for a long time …. Just don’t poke the unions in the eye with this. No anti-union rhetoric, and keep channels of communication open with them.”**

So nothing about this Oval Office session with the new president should have made Schnur nervous. In fact, he was thrilled that eight days into Obama’s presidency, amid the fierce economic crisis and other issues that commanded his attention, Obama had reserved a half hour to deal with education. Yet Schnur was nervous anyway, not only because those other Democrats had failed him before, but also because, in terms of its prescriptions for changing K-12 education across the country and how much money it proposed to make that happen, the plan that he, Higginbottom, and Duncan had cooked up was far beyond what any president had ever dared. In a December transition meeting, Obama had signed off more generally on the direction he would follow in education reform. Now it was time for specifics, and the specifics were not conventional.

Schnur had written a three-page memo summarizing how the Obama administration would take the $800 billion economic stimulus package the president was about to propose and carve out $15 billion as a jackpot to be divided among 10 to 15 states that won a contest related to education reform. It would be a real contest, with no state able to prevail because of size or political influence. The winners would be states that submitted the best, most credible specific plans for using data and student-testing systems to evaluate teachers based on student improvement; for creating compensation and tenure systems for principals and teachers that would be based on their effectiveness in boosting their students’ proficiency; for taking over and turning around consistently failing schools; and for encouraging alternatives to traditional public schools-such as charter schools.

The proposed contest had a catchy name: Race to the Top.

* Unless otherwise noted, thoughts attributed to anyone in this narrative are based on the author’s having talked to that person. A full explanation of sources can be found in the Notes section at the back of this book.
** Quotations of conversations are based on the recollections of those who were present. In situations where the recollections are not explicit, quotation marks are not used, and the conversations are paraphrased.