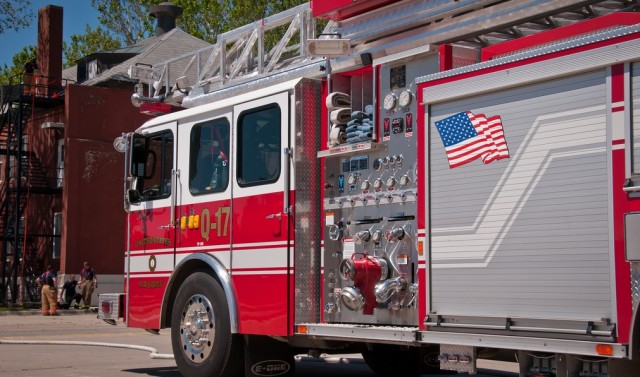 Richard Price, chief of the San Ramon Valley Fire Protection District, was having lunch at a deli when he heard an emergency vehicle approach the restaurant. The emergency crew parked in the deli’s lot, and went to a business next door where there had been a report of a heart attack.

Price knew he and other colleagues could have responded to the cardiac emergency faster–if only he had known it was taking place. But how could he know? That afternoon, the chief and his colleagues drew up a plan on a deli napkin for a smartphone application that would provide just such notification.

Earlier this year, the San Ramon Valley Fire Protection District iPhone application was launched–allowing people certified in CPR to volunteer to be alerted if someone nearby appears to be having a cardiac event and may need help. Once notified of the emergency and the location, registered users can find the victim and administer CPR (or locate the nearest public defibrillator, as directed by the app).

“We’re crowdsourcing good Samaritans,” the fire chief has said of the app.

Such innovation reveals the delightful paradox hidden in all the bad news about California’s troubles:

Californians, while living in a state that experts say is ungovernable, have within their reach new tools that give them greater power to govern themselves than ever before.

Technology is the reason. Often with little public notice or scrutiny, most of California’s 5,000-some local governments are experimenting with technologies to engage the public and improve services. The sophistication of this use of digital technologies for citizen interaction–referred to as eGovernment, digital government, or Government 2.0–varies. The benefits are wide-ranging.

You can go online to have the city police in Santa Clarita check on your home while you’re on vacation. In Pebble Beach, you can add yourself to the Community Services District’s database of local people who need special assistance in the event of an emergency evacuation. You can schedule a visit to your cousin in jail via the Santa Clara County website or public kiosks.

If you need to appear in court or qualify yourself for social services in Nevada County, you can avoid long drives over windy, snowy roads by finding one of several county video cameras set up for direct conferencing with local government. And if you’re a truant in Anaheim, you can avoid school reassignment or prosecution by carrying a hand-held tracking device, provided by your school district and the city police, that monitors your location throughout the day.

The timing of eGovernment’s rise is at once problematic–and fortunate. Public frustration with government and cuts in public spending are natural obstacles to launching new programs. But the same factors also create an opportunity to redesign how government interacts with, and services, the public. Technology, if deployed wisely and efficiently, may provide better engagement, better information and better service delivery, at less of a price.

How is California doing so far at this task? The early results are uneven. California’s powerful culture of innovation has produced clear progress from the days of simple government websites. But the progress has been unevenly distributed. And success stories have yet to be identified, much less encouraged and disseminated. When it comes to eGovernment, Californians don’t know what other Californians are doing, don’t know what works, and don’t know how to measure success.

How to start? By creating a clearinghouse where Californians and their governments can share information about what’s working and what isn’t. Armed with information, Californians would be better positioned to demand a basic level of technology-driven service and engagement, just as they do with analog government services such as emergency response and sanitation.

For now, governments such as the San Ramon Valley Fire Protection District must spread the word themselves. To let the public know about its iPhone app, San Ramon used social media, issued public service announcements, and did aggressive outreach to community groups. Some 40,000 people within the fire district’s boundaries have downloaded the app. The fire district also has set up a non-profit foundation, PulsePoint, to help public agencies around the world (more than 125 have inquired) replicate the San Ramon application in their own communities.

They may go further. Apps similar to San Ramon’s could be employed to find missing or kidnapped children, to fill sandbags during a flood, or to staff emergency shelters in times of crisis.

April Manatt is principal of April Manatt Consulting and lead author of the new report, “Hear Us Now? A California Survey of Digital Technology’s Role in Civic Engagement and Local Government.” Joe Mathews is Zócalo’s California editor and an Irvine Senior Fellow at the New America Foundation.