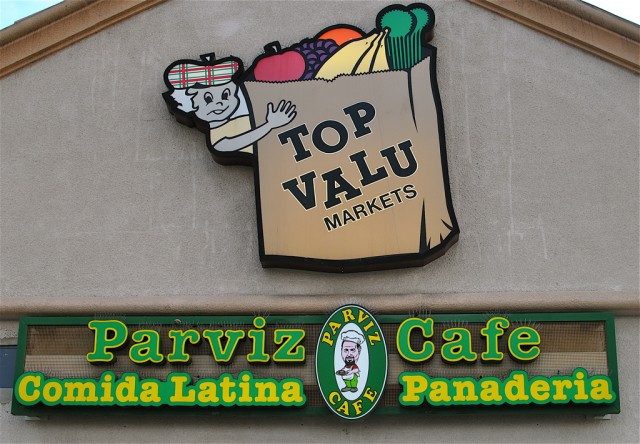 East Los Angeles has no Trader Joe’s or Whole Foods. But it does have El Super and Top Valu. They are just as fulfilling. For the renegade vegetarian or the naturally healthy immigrant ranchero or simply the health-food-curious searcher, now is the time to take a revolutionary step: go food shopping east of the river. No more trips westward for pricey pints of unsweetened almond milk and salubrious meats.

Join me on a shopping day and let me show you.

My excursion starts with a beverage. “La gente preguntó por ella,” says Jorge Caballero in response to my query about how he came to be selling unsweetened almond milk. (“The people asked for it.”) Caballero is assistant manager of the Top Valu supermarket chain located along historic Whittier Boulevard. It’s a Latino favorite, and the store sells about a dozen cartons of alternative milk a week. Only one of those units is getting sold to me–I promise. The rest are purchased by other inner-city almond milk lovers.

Perusing Top Valu’s aisles, I spot a pack of fresh New Zealand lamb necks, 1.52 lb for $3.48. How is lamb that is grass-fed, free-range, raised without hormones or steroids (according to the New Zealand Lamb Cooperative), and flown thousands of miles so cheap? Caballero says, “No se vende tanto” (It doesn’t sell much). What he means is that you launch a product by pricing it low, to increase sales. It’s a golden rule among supermarkets in East Los Angeles.

I walk a few scenic blocks east to Cuevas Health Food store on Atlantic Boulevard, East L.A.’s only official health food store, complete with brown-rice pasta and aisles loaded with supplements. It’s been around since 1990, and I occasionally stop in to buy some jalapeño almond “cheeze” or grape seed vegenaise. I’m not vegan, vegetarian, or anything like that, but I do like to dabble and detox a bit once in a while.

The prices at Cuevas are higher than at Whole Foods. The 16-ounce glass container of vegenaise goes for $6.61 here, compared to over $5 at the corporate health giant. But the nearest Whole Foods is about nine miles away, and gas isn’t cheap. Plus, Cuevas is family-run, so “locavore” style it is.

As owner Berta Cuevas rings me up and we chat, I happen to confess to my flesh-eating ways. She reprimands me for this. Then I ask her what the most popular item is, and she answers “la soya,” referring to soy in all its forms. What does she think of all the newfangled anti-soy health-food trends? “Antes de que digan algo, que lo prueben primero,” she answers. (“Before you say something, try it first.”) She’s had soy in her daily diet for the past 20 years.

Deeper east into the Commerce shopping center is my mother’s favorite of all these up-and-coming health market underdogs, El Super. El Super really is quite super, and their slogan is “El Super-Cuesta Menos” (El Super-Costs Less). They are notorious in the barrio for their weekday-specific food deals. For example, on “Fruit Wednesdays” (Miercoles de Frutas), you might find four pounds of ripe roma tomatoes de primera (first quality), big and without bruises, on sale for 99 cents. They have a designated day for meats, too. On these days, the store is like one big mosh pit.

About two years ago, El Super started carrying soyrizo, a highly seasoned textured soy protein equivalent to the traditional Mexican sausage chorizo. This year, I noticed they had frozen 100-percent mamey fruit pulp, juicy and plump tunas (prickly pear fruit), and even baggies of raw chia seeds. Recently, my mother overheard a customer asking a butcher for pollo ranchero. My mother followed her lead and came back home with a whole pollo de rancho that made for a delicious caldo de pollo (chicken soup) and green pipian sauce.

Upon further investigation, I’ve found out that El Super carries free-range chicken for $2.50 a pound (compared to the water-injected conventional chicken that sometimes goes for 99 cents a pound). The butcher informs me he gets a few such chickens delivered daily and that these pricier specimens have never been frozen. Since these are not advertised anywhere, you have to ask for them amid the carnivore-bartering hustle. Further down the meat department, I find a freezer chock full of flash-frozen venison, all the way from New Zealand, again. I almost do a back flip. A one-pound package (more than enough for two people) will set you back nine bucks, but it is lean, not too gamey, and wildly delicious when prepared like carne ranchera at home.

In the bakery section, El Super has the thrifty eater covered, thanks to delightful, crusty, airy, and soft whole-wheat renditions of the Mexican staple bread, Birotes (aka Bolillo). And are you ready for this? Six for 99 cents! (Ninety-nine is the magic price point for Mexican émigrés in America). The people of East Los Angeles are catching on, and lines sometimes snake all the way to the back freezer refrigerator section of the store.

I cannot, on this excursion, go to a certified Farmers Market. That’s for Saturday mornings, when the East L.A. Farmers Market sets up in the parking lot of the East L.A. Civic Center. It has been around for four years now. I used to volunteer there in exchange for a box of tree-ripened yellow summer peaches. And this year will mark the one-year anniversary of the Boyle Heights Farmers Market, located right atop the Mariachi Plaza station off the Gold Line.

We might not think of East Los Angeles as a pioneer in healthy eating, but East Angelenos must be eating healthier. As Jorge Caballero of Top Valu told me, “Esas comidas todavía están disponible porque si se están vendiendo, si no, ya no estaran ahí.” Translation: “The foods are still there because they are selling; if they weren’t selling, then they wouldn’t still be there.”

And I’m not the only one buying.

Javier Cabral is a 22-year-old resident of East Los Angeles and is responsible for TheGlutster.com, a food, booze, music, and general desmadre blog. He currently freelances for LA Weekly, OC Weekly, Alhambra Source, and Saveur Magazine.