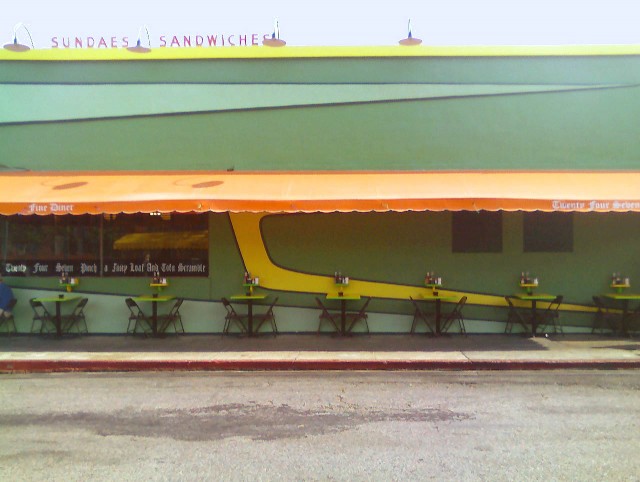 The first thing I loved about the neighborhood of Los Feliz was the unexpected effect of dropping an envelope holding a short story of mine into the mailbox at the corner of Vermont and Melbourne. This was in early 1991. I slammed the box’s trapdoor twice to make sure my envelope had dropped inside of it. When I came back, the whole mailbox had disappeared. I asked people at the post office about it, but they said they didn’t believe a mailbox had ever been at that location, despite rust marks on the sidewalk indicating otherwise.

Such would-be nuisances were not nuisances to me; they made my neighborhood engagingly ironic, even literary. One morning, while descending the stairs of the Lena Luckenbush building, where I lived, I saw some work being done to the elevator shaft and thought I was in luck: I’d no longer have to take the 54 steep steps up to apartment 13. (Thirteen–another literary touch.) That afternoon, the shaft had been boarded up, its portal replaced by drywall. The elevator had never existed.

I lived in that building 16 months. The apartment was cramped, but it had a walk-in closet so large that you could relax inside of it with a drink. I called it “The Drinking Room” and bought a tiny café table that I draped with an exotic cloth from the Sari Emporium, an Indian fabric shop two short blocks down on Vermont. The Drinking Room had room for only one chair, but I didn’t have much company.

The kitchen, a long, narrow, over-enameled, white galley space in which I put up the jackets of old albums like Dexter Gordon’s Go! and the soundtrack to The Umbrellas of Cherbourg to mask uneven patches of swelling paint on the walls, was oddly commodious, running the length of the rest of the apartment. In the morning, I’d make cowboy coffee in a large, clear Pyrex percolator that perked five sincere cups’ worth, and I’d drink them all.

Sometimes, when I did have company coming, I’d turn on the oven. Then I’d bust down Melbourne to Hillhurst, where the Yellow Ribbon Market had a tiny meat counter manned by Pierre, a longtime Los Feliz chef who was winding down his career. Pierre would give me cooking tips and lay aside a cut of chateaubriand. The cut was always a tiny bit over two pounds, so I’d take it back to my apartment, dress it, and tuck it into my oven. Then I’d descend my 54 stairs and bound down the alley across Melbourne to the Dresden, where Teddy, the bartender, would pour me a martini. I’d nurse the martini for 38 minutes and return home to a perfect two-pound medium-rare roast.

Once, when my Mac was stolen, I called the police to file a report. My apartment faced another building across a city parking lot. Every night, a young woman would come home and, immediately upon entering her bedroom, strip off her clothes. It was an act to admire even at a distance of 75 feet. When a cop came to take my report, it was during undressing time. I pointed to the window. He said, “Oh, man, hold on, I have to watch this.” He did. I made coffee. Then he resumed writing his report and assured me that, while there was no chance of finding my Mac, he was very glad I’d reported the crime, and I shouldn’t hesitate to report more of them.

My building was multi-use, meaning that businesses were on the bottom floor and residences were above it. One of those businesses was the Onyx Sequel, heir to the oldest coffee house in L.A., the Onyx, which had stood in the same place. The interior of the Sequel was like the interior of a writer’s soul: half-finished, dilapidated, and stuffed with lugubrious art and nightmarish furniture. I played chess there, and sometimes I’d read. A friend and I, to be polite, would order coffee. (There were no Americanos, but there was an “espresso long.”) Most people were neither polite enough nor flush enough to follow our example. They would sit, coffeeless, reading or drawing. Sequel was where I saw a laptop for the first time.

The reading I did there: Random House published three grand volumes in 1992 and 1993. One was a collection of Gore Vidal essays spanning 40 years. The other two were the “Complete Short Stories” and the “Complete Essays” of V.S. Pritchett. Each of these three books ran to well over 1,000 pages. The two Pritchetts cost $35 apiece and the Vidal $37.50. These were early 1990s dollars. I bought them because I was feeling flush from some modest probate winnings. I also found a first American edition of Lawrence Durrell’s Alexandria Quartet in Santa Barbara for $150, and my literary true north was set for life. I remember the prices because, all these years later, those same books still occupy my nightstand, still within easy reach.

Most mornings I read at George’s. Galina, the Russian waitress who ran the place, would order for me and bring what she felt like bringing. The chairs swiveled, and there was a cheap adhesive letter in front of every one, the kind of metallic and black stick-on letter you find on the door of a ghetto apartment. I usually sat at chair J, if it was open, and it almost always was; even so, Galina couldn’t, or wouldn’t, remember my name, not ever. I liked to gaze at a photo hanging behind the counter. It was of Debbie Harry sitting in one of the booths, brushing her Blondie hair back off her face after a long night out.

I vacillated most late afternoons: Vermont or Hillhurst? Vermont was sex and hedonism, with the Sequel, Dresden, and Sarno’s bakery. Hillhurst was love and dignity, with a title company, a hole-in-the-wall city library, Pierre’s meat counter, and, far, far up the street, Mr. C’s, perchance the darkest Italian restaurant in L.A., in every sense of the word. Even further up was the steakhouse Michael’s, which for a while, along with the Windsor restaurant, supplied the Dresden with a steady stream of bartenders.

When the MTA made the front lip of Barnsdall Art Park a staging area for digging the Red Line, a few workers, invariably called “Digger” and “Gopher” by the impresario Carl and by bartenders Ted and Les, would pop into the bar at the Dresden to blow much of their salaries. Later, a golf foursome would roll in, squawk bad holes, remember great shots, and decompose along with the day, finally crawling out in time to put in a late afternoon appearance at whatever job they claimed to be performing.

Most nights I spent alone with my books, reading or writing.

One of those nights, that autumn, there was a knock on the door. It was my girlfriend, a woman I wasn’t even sure was my girlfriend until that moment. She held a lightweight item from her own apartment on Whitley: a butterfly chair.

I understood. She was moving out of that apartment, and she wanted to move in with me. Her butterfly chair would go well with the twin-blade wooden propeller I’d salvaged from an airplane in a junkyard in Lomita. It wouldn’t go well with a wooden statue of Moses that I’d bought at Uncle Jer’s, but nothing would go well with that.

I was 34, an only child, and both my parents were dead. This was the apartment where I’d been living while they were dying-first my father, Joseph, then, 94 days later, my mother, Mary. Two defining losses, two hundred trips down to the South Bay as it all unspooled. I had no immediate relatives left. The girlfriend was in her late 20s, escaping the suburbs, and vastly underpaid at a local museum. I needed company. Perhaps I even needed fictive kin. I invited her to bring her chair inside.

That was my Los Feliz in the flats, before Swingers, before the cellphone or the laptop or the Metro stop, before there was an Internet connection in every home, before there was a hybrid cramming into any tight space. You could see Bullock’s Wilshire and knew its tearoom was still serving Caesar salads the way you liked them. The Los Feliz was one theater, not three. It wasn’t Skylight; it was Chatterton’s. It wasn’t Figaro; it was the Onyx Sequel. It wasn’t Fred 62; it was George’s. It wasn’t Mexico City; it was Mr. C’s.

The girl and I stayed together for four years. (One Valentine’s Day, showing my passionate side, I gave her something she wanted: Mike Davis’s City of Quartz.) We moved from my cramped quarters at the Luckenbush to the other end of the block, where a Spanish-style apartment building occupied the corner of Rodney and Melbourne. Moving day, the last day of the month, was to become the first full day of the 1992 riots. As we were hauling a sofa down the block, someone stopped us to inquire, very politely, if we were looting it.

Today, the well-worn coffee house that so resembled a writer’s soul is a café with mirrors and a zinc bar imported from Marseilles. The laundromat has become a Coffee Bean & Tea Leaf. Still, much remains the same. You can visit The House of Pies, Dresden, Palermo’s, the Rustic, or the Drawing Room. The Shakespeare Bridge, the neighborhood’s venerable icon, has been rehabbed to endure the next earthquake. The real change, I fear, is that people in their 20s and 30s dream of making money in Los Feliz and then leaving for someplace else–New Mexico, say, or Irvine, or, worst of all, Austin–to strike a better deal.

Twenty years ago, Los Feliz was the better deal. You tolerated postal nuisances, lustful cops, and stingy landlords with a smile. You were learning how it all worked, and you were glad you were there to learn it. You dreamed of staying, not of leaving, and I experienced the neighborhood the way L.A.’s neighborhoods seem designed to be experienced, with a progression from cheap bachelor pad to larger apartment and, finally, a home of one’s own. Will another generation of arrivistes get an opportunity to experience a similarly joyous arc? Will most Americans?

To learn why a mailbox goes missing, or even what might happen to our own lives, we once had to sit with patience and take a long view. Lacking gadgets that told us everything, we had to stick around if we wanted to find out anything. My neighborhood is still ebullient, still literary, still rife with quirks. But, in this age of profuse information, something has changed. What’s gone missing, I think, is mystery–mystery that evaporates when knowledge is gleaned in a mere moment; mystery that takes time to resolve, if it’s ever resolved; mystery that keeps us curious enough to fall in love with living people, with living places.

Joseph Mailander is a writer. He is author of The Plasma of Terror, a novel, and has been a contributor to many publications. He lives in Los Feliz.