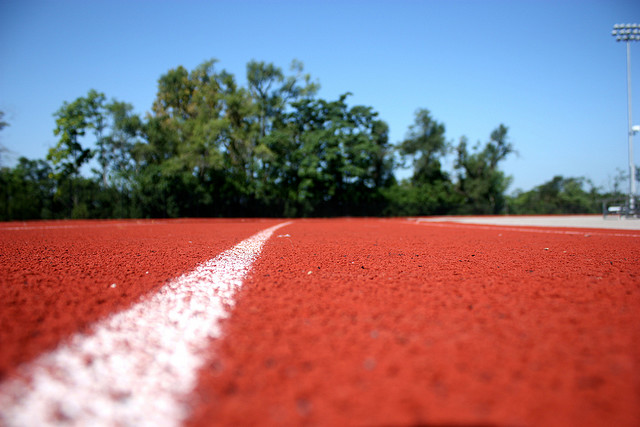 The battle of the sexes came to Portola Junior High School in Orange, California one day in the spring of 1973. When the bell rang for nutrition break in the middle of that morning, the entire student body poured out of the classrooms and marched across the basketball courts and football fields to the track on the far side of campus.

“They’re going to race,” someone told me.

I knew about long runs. To my classmates, I was the egghead who wanted to be an athlete. Captain of the history team and backup center on both the varsity football and basketball teams, I was six feet tall and broad-shouldered–but terribly near-sighted. In many ways, I was still the kid the school psychologist had described five years before as “the most uncoordinated child I have ever tested.”

But spring was track season, and I was the second-best long-distance runner in the school. Unfortunately for me, long-distance running wasn’t a popular sport in Orange or in the U.S. In 1970, the New York Marathon had a budget of $1,000, and only 55 competitors crossed the finish line. In the spring of 1973, even as I was winning races and opposing coaches were working out strategies to box me up in dual meets, I knew that the third-best hurdler and the fifth-best sprinter at Portola Junior High School would get far more respect for their athletic accomplishments from our fellow students than I did. 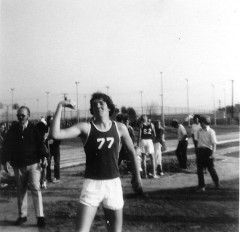 My problem wasn’t only that long-distance running was weird and unpopular. What probably most hurt my case for being considered a real athlete was that the best long-distance runner in the school was a girl. That her nickname was “Little Mary,” and that the moniker was appropriate, didn’t make things any easier. Mary was short even for a fourteen year-old, and she was so leanly muscled as to seem scrawny to junior high students whose idea of a real athlete was a quarterback or halfback.

In the early 1970s, today’s explosion of opportunity for female athletes wasn’t visible on the horizon. Some girls played sports, but everyone knew that girls weren’t athletes. Girls were cheerleaders. After any football pass that came up short, or any baseball throw that bounced before reaching its target, at least one opposing player or fan was all but guaranteed to say, “You throw like a girl.”

Both sports and American society were changing, though. In 1972, Frank Shorter, an American, won the gold medal in the marathon at the Munich Olympics. That same year, the Boston Marathon–the oldest race of its kind in the United States–permitted women to compete for the first time. Until then, race officials had always denied applications from women on the grounds that no woman would be capable of running that far. Internationally, the prejudice against women lasted even longer. As late as 1980, the longest running event for women in the Moscow Olympics was 1,500 meters–the so–called “metric mile.”

Not only women’s liberation but also the backlash to it hit the world of sports hard in 1973. Bobby Riggs–a 55-year-old former Wimbledon and U.S. Open champion and world number-one–began to mouth off in the press about the ridiculousness of the very idea of equality between the sexes. Women’s tennis was a joke, according to Riggs, and he’d recently challenged the great women’s champion Margaret Court to a match. Although he’d been coached for many of his teenage years by one of the top women tennis players in Los Angeles, Riggs played the old man-versus-woman angle for all the publicity it was worth. Later that spring–playing a game of tactical lobs and spin shots–Riggs would beat Court.

That morning at the track, though, I was still trying to figure out what this race between two boy athletes and Mary was all about. I spied Mr. Burnett, the head boys’ P.E. coach, a bit ahead of me and to my left. I cut over and picked up my pace. “Why are they the ones who’re going to race her?” I asked.

“Because they’re the ones who challenged her,” he said, and then he shook his head.

I think Coach Burnett and Miss Hawkins (the girls’ P.E. coach, whom Mr. Burnett later blamed for setting up the race) might have been the only ones that morning who didn’t expect the guys to win. Well, them and Mary.

That is: my classmate Mary Decker.

Actually, I had a sense that Mary was going to win, too. My junior high classmate was already competing against–and beating–adult women in international track meets. But when I discovered that the two guys were running a relay, their consecutive half-miles to her mile, I had my doubts. 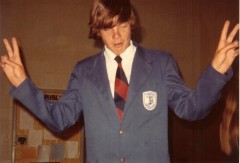 The race started, and Hargrove, the ninth-grade quarterback, took off at a dead sprint. He was pulling away, and the crowd was enjoying itself as it cheered him on. His speed didn’t last long, though, and after maybe half a lap Little Mary began gaining ground. The cheers turned to shouts of, “Come on, Paul. You can do it!” Then the exhortations turned to groans as Mary Decker passed Hargrove without a glance. When Hargrove finished his half-mile, Mary Decker’s lead was larger than Hargrove’s had been at the peak of his sprint.

The exhortations picked back up a bit when Hargrove passed the baton to Dave Galloway, the eighth-grade quarterback. Galloway took off quickly, but–having seen what had happened to his predecessor–he paced himself somewhat. He gained a fair amount of ground on Decker in his first hundred yards. But, with every hundred yards he ran after that, the distance he was gaining diminished until, on her fourth and final lap, Little Mary Decker began to expand her lead.

Most of the girls were cheering for her now. Aside from a few muttered curses, most of the guys in the crowd had fallen silent. As Mary crossed the finish line to mostly muffled applause, the second sprinter–glorious representative that he was of male athletic dominance–wasn’t even on the final straightaway. Most of the crowd was already heading back to the blacktop to buy a snack or get ready for their next class by the time Galloway finished the boys’ relay.

The next week, across town at the final dual track meet of the season at Cerro Villa Junior High School, near the end of the three-quarter-mile race, I heard something I’d never heard before. My teammates were cheering for me. And this time it wasn’t just the coach and my buddy Vince Deveney, the sarcastic shot putter, urging me on. To my amazement, as I began my kick past the last of the Cerro Villa runners just after the start of the final straightaway, it kept getting louder. The whole team was shouting.

My supporters were the same guys who six months before had tossed me out of the back of the gym without my clothes on (in full view of one whole row of classrooms), locked the door behind me, and stolen my favorite shirt out of my football locker.

I sprinted to the finish line for a victory, and, for the first time all season, my schoolmates came up en masse, clapping me on the back in congratulations. “That was great! I thought he had you beat until the last hundred, but you showed him. Way to go. Really, way to go.”

I was flabbergasted. It hadn’t occurred to me that Mary Decker’s trouncing of the two sprinters would change how anyone thought about me. I’d never run with her or against her. We’d never had a class together, and I don’t think we ever had occasion even to speak to each other. But Mary Decker had shown not only that girls could be athletes but also that long-distance runners were tougher than sprinters, and in the process she had changed the way our corner of the world saw me.

Mary Decker Slaney went on to far greater victories. A year after her race against the boy sprinters of Portola Junior High, she set her first three world records. Eventually, she would set thirty-six U.S. records, seventeen world records, and–in the same meet in 1983–win World Championships at both 1,500 meters and 3,000 meters. She is the only athlete ever to have held the American record in every competitive distance between 800 meters and 10,000 meters.

Thanks to Mary Decker, I finally learned what it felt like to have a crowd cheering me on. I never won another race. The next school year, at my new high school in Irvine, I blew out my knee early in cross country season, came down with mononucleosis and encephalitis during track season, and decided perhaps the world didn’t need me to be a great athlete. But that fall, when Billie Jean King crushed Bobby Riggs on national TV in the Astrodome, I was rooting for her all the way.

Kevin Hearle is a poet, essayist, Steinbeck expert, fifth-generation Southern Californian, and a visiting scholar at the Bill Lane Center for the American West at Stanford University.