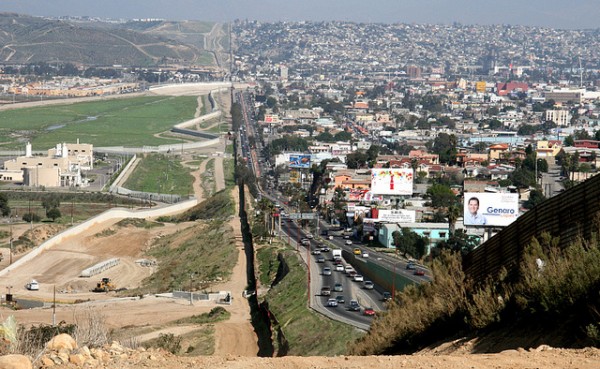 The United States and Mexico have long been friendly yet wary neighbors. Mexico fears U.S. interference, and the United States fears Mexican misrule. Countless smaller and related issues complicate the relationship. Nevertheless, the two countries are in many ways more integrated than ever. In anticipation of “An Evening With Ricardo Salinas,” a Zócalo event in New York, we asked several observers of U.S.-Mexican ties for their thoughts on the relationship.

The United States and Mexico have a special relationship–one that goes beyond administrations and institutional arrangements. Americans and Mexicans are joined by both societal bonds and blood relationships.

The percentage of Hispanics in the U.S. population is approaching 20 percent, and Hispanics are among the fastest-growing minorities in the United States. Two thirds of them are of Mexican origin.

Mexico is a vital trading partner for the United States: for around twenty U.S. states, Mexico is the number-one trading partner. The U.S.-Mexican border, although now deeply affected by violent crime on the Mexican side, has always been not just a line of separation but also a membrane of connection. Violent crime and domestic politics in either country can disrupt established relationships and increase or minimize movement across the border, but they are unlikely to sever the deep family bonds that span the border deep into each country’s territory. The more U.S. citizens of Mexican origin have a voice in the U.S. political system, the more the bonds and connections will become institutionalized as well.

The 2012 elections in both countries present an opportunity to deepen U.S.-Mexican institutional relationships beyond the societal ties. The United States can encourage the rule of law by helping Mexico improve its justice system and law enforcement capacities. It would be unfortunate if domestic politics in either country resulted in the curtailment of security cooperation, which has increased over the past several years. The post-election period should also be seized in the United States to move forward with immigration reform, especially since the numbers of Mexicans crossing illegally are at historic lows. Many of those who continue to cross are driven precisely by the family ties that bond the two countries together.

Vanda Felbab-Brown is Fellow in Foreign Policy at the Brookings Institution and author of Calderon’s Caldron: Lessons from Mexico’s Battle Against Organized Crime and Drug Trafficking in Tijuana, Ciudad Juárez, and Michoacán.

We Are Way Overdue For a Special Relationship

The relationship between Mexico and the United States is unique. Even if we disregard the most pressing factors intertwining the fates of the two nations–proximity (2,000 miles of shared border) and demographics (1 million Americans living in Mexico and 14 million Mexicans living in the United States)–we still need a deep, comprehensive, and strategic bilateral agenda. Yet we don’t have one.

As a world hegemon with an ongoing “War on Terror,” the United States is often focused on countries far away, with Mexico relegated to a secondary place. True, the relationship between the two countries is so intense and institutionalized in certain areas that we can see results even without putting much effort into it. But there has been a cost to having so much creative thinking and strategic planning on the part of the United States going to other issues instead. Mexicans, particularly the political elite, have also lacked the imagination and political will to foster a deeper and more beneficial relationship.

The bilateral agenda has been neglected and the challenges are enormous. Future American and Mexican leaders should not repeat past mistakes. There is simply too much at stake, and much of the stability and prosperity of both countries depends on it. A clear signal on the importance of the bilateral relationship should be sent from Washington and Mexico City. We must reset the relationship based on realistic objectives and a common plan to tackle several urgent challenges: organized crime, immigration, economic prosperity.

It is crunch time.

Ana Francisca Vega is deputy editor of AnimalPolitico, a Mexico City-based political news site, and co-author of Twitter and Political Change in Mexico. She is an associate at the Mexican Council on Foreign Affairs.

If We Don’t Have a Special Relationship Yet, We Should Get One Fast

Though “special relationship” is typically reserved to describe Anglo-American ties, we should perhaps consider expanding it to the U.S.-Mexico relationship–a partnership that has strengthened greatly in the administrations of Felipe Calderón and Barack Obama.

Ties are deeper between our two countries because we realize today that our destinies are linked and that the problems we share can only be resolved through cooperation. Take the drug violence afflicting many parts of Mexico. Almost everyone now agrees that the United States and Mexico have a shared responsibility for it. Mexico bears blame for allowing its police and courts to be corrupted, for enabling organized crime, and for eroding its citizens’ faith in law and order. At the same time, U.S. drug demand is responsible for almost all of the guns and cash that feed these cartels, allowing them to hire and arm mercenaries and to bribe and intimidate officials. We simply can’t solve the problem of drug violence in either country without coordinating policy interventions on both sides of the problem: supply and demand.

I mention organized crime violence first because it is the issue that gets the most media attention and because, for those of us who have family and friends in Mexico, it is uppermost in our minds. Yet security cooperation is only one of the many fronts on which our two countries have strengthened bi-national collaboration in recent years. The commercial relationship is perhaps stronger than it has ever been, showing signs of deepening economic integration. On environmental matters, too, our two countries have exhibited greater bi-national cooperation, working together to manage the watersheds and ecosystems that straddle the international boundary.

Going forward, next year’s elections present an opportunity for both countries to take a hard look at their truly “special relationship,” determining what’s working, what’s not, and what can be improved on. But the doctrine of “shared responsibility” shouldn’t be up for discussion. It’s a mutually beneficial foundation for bi-national cooperation and should continue.

Robert Donnelly is a writer/editor at the Woodrow Wilson International Center for Scholars and a former program associate of the Center’s Mexico Institute.

We Used To Have a Special Relationship–Let’s Rekindle It

Once upon a time, the U.S. and Mexico had a “special relationship,” one unique to the hemisphere. From the end of World War II until around 1970, Americans regarded Mexico as prosperous, culturally vibrant, and politically stable, if not exactly democratic. In the fraught context of the Cold War, Mexico’s predictable transitions in power every six years under the ruling Partido Revolucionario Institucional (PRI) were viewed by most Americans as the next best thing, and perhaps even preferable, to the messy uncertainties of competitive party politics.

For better or for worse, however, that earlier “special relationship” is long over. Mexico’s politics are now exceptionally messy; the country’s “folkloric” reputation has been supplanted by that of a culture of violence; and debate in the U.S. centers not on whether a border fence should be built, but on how long it should be and whether it should be electrified.

Is there is any hope of “resetting” this relationship?

Here’s one idea: following the next presidential elections in the two nations, both presidents should meet at the border, as Presidents Taft and Porfirio Díaz did in 1909 and Presidents Johnson and Díaz Ordaz did in 1968. (President-elect Ronald Reagan also met with President López Portillo at the border in 1981, where he pledged to establish a “personal relationship” with his Mexican cohort, but by then the bilateral “special relationship” was already in disrepair.) Meeting at our increasingly fortified border would reaffirm in the strongest symbolic terms two basic premises of the “special relationship” as it once existed: mutual respect and recognition of the ties that bind.

Neither can be accomplished, however, until the border is shrunk, both literally and figuratively. Meeting at the border would be an important symbolic step in this direction of renewal, a diplomatic gesture with a well-established history. The time is right for such a return to precedent.

Eric Zolov is associate professor of history at Stony Brook University. He is author of Refried Elvis: The Rise of the Mexican Counterculture and co-editor of Latin America and the United States: A Diplomatic History.