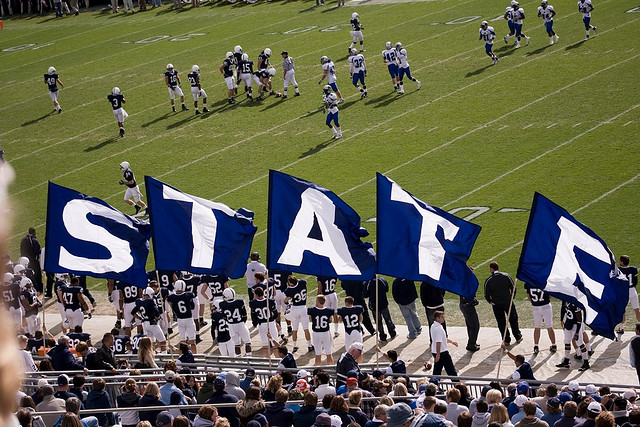 Since I graduated from college in 2006, my winter weekend errands-and-lounging outfit has remained grubbily uniform: out-of-style jeans, sneakers, Penn State sweatshirt. The outfit is comfortable, and I am a sloppy dresser, yes, but there was another reason why I sported that sweatshirt so frequently. My neighborhood in the Virginia periphery of Washington, D.C. is so popular among Penn State alumni that it boasts not one but two bars for Nittany Lion football viewing–one rowdy and one low-key (in spite of bottomless mimosas during noon games).

I’ve never been terribly outgoing; my social circle is perhaps better termed a pentagon. But as one of many sporting Penn State gear on a chilly weekend afternoon, I was certain to get a smile or hear a muttered “We are” (the first half of the Nittany Lions’ declarative football cheer) as I passed someone in the produce aisle or at the pharmacy. In those brief moments, I was part of a community, and, each time, I cherished that feeling that I was part of something larger.

But last Sunday, as I readied to go to the library, I hesitated before pulling on that hoodie, whose wrists are so frayed and threadbare from constant use. Jerry Sandusky, aided and abetted by a negligent administration, took from me my one strong community tie. I am ashamed of the school’s handling of the initial reports that Sandusky was molesting young boys while on campus–while I, too, was on campus, a freshman, when now-assistant coach Mike McQueary says he walked in on Sandusky raping a child. At those same moments in 2002 when I was slowly developing pride in an establishment, something I had never before experienced, Sandusky was engaged in the reprehensible actions that would nearly bring down the institution.

My attendance at Penn State was an accident of altered finances and family circumstances. As a pedantic, AP-credit-collecting, grade-grubbing nerd, I believed myself bound for Ivy greatness. My extended family was small and dispersed; I was born into no religious tradition and so had no church from which to seek comfort; I changed schools frequently and was typically overlooked. When burdened by minor teenage disappointments and larger familial problems, I looked forward to college, where, as Tracy Flick put it in Election, “I thought I’d finally be among people who were like me. You know, smarter, more ambitious people.” And then, between the due date for college applications and the first round of acceptance letters, my family collapsed, and the (already tight) monetary resources I had counted on to supplement my after-school job and financial aid evaporated. No Ivy for me; Penn State would be my destiny. I was angry at myself, and at my family, because I believed I had earned something better than the state school to which a huge percentage of my classmates matriculated.

Despite the snobbery that I packed for college along with my Yaffa blocks and shower caddy, I surprised myself by growing content, then happy, at Penn State. Soon I found myself an avowed–if not obsessive–fan of the Nittany Lions and came to feel the comforting identity boost that comes from affiliation, a comfort telegraphed in State College, and beyond, by those two words, “We are.” Even that straightforward “We are . . . Penn State” cheer, roared at every home game, buoyed me: Campus legend has it that the phrase originated in 1946, when Penn State was due to play Miami but was told they could not bring their two African-American players. The team voted to skip the game, after players reportedly proclaimed during their deliberations, “We are Penn State!” As in, we play all, or none.

The simple retro uniforms, and the fact that our iconic football coach had donated generously to the library that bears his name, were further inducements to embrace the old-schoolness of Penn State spirit. It wasn’t an overnight conversion, admittedly. At my first pep rally, I muttered the standard complaints that such worship of athleticism came at the expense of academics, that we were engaged in fascism-lite by lifting our fists and shouting slogans in unison. Luckily, my new friends ignored me (or at least waited until I left the room to complain). But at my first Penn State football game, which came halfway through the season, I was caught up in the excitement and enthusiasm. The next year, I bought season tickets. I scrapped my tentative plans to apply–with fresh paperwork guaranteed to bequeath me a more generous financial aid package–for a transfer to a “better” school or, at the least, rush to graduate in three years and get out of that plebian cesspool. Instead, I dove in.

Engaging fully in the Penn State experience–attending gymnastics meets as well as football games, writing for the Daily Collegian’s opinion page, and even indulging in Natty Light at frat parties–brought out my long-slumbering fun side. The academics, too, were engaging. As part of the Schreyer Honors College (a T-shirt I have from those days says, “Doing your group work since 1997”), I was lucky enough to experience small seminars, taught by professors instead of TAs, which helped me avoid some of the mass-production downsides to a land-grant university. And I met my football fanatic boyfriend, who patiently taught me what, exactly, that highlighter-yellow line meant when we watched away games on TV.

Football was vital to the Penn State pride I developed, part of the social cohesive glue. I took approving note of the high-minded attitude the living legend Joe Paterno represented. Undaunted by pressure, legend had it, he would not deign to sacrifice his players’ education or indulge a bad seed just to win a game. Perhaps I, too, could enjoy the football and the frat parties without sacrificing my identity as a high-achieving student. When my fellow students acted like U.S. football hooligans on occasion–at one decidedly low point, I watched as friends of friends serenaded some elderly Buckeye fans at a tailgate with an incredibly lewd song mentioning Ohio State coach Jim Tressel’s wife–I deemed them outliers (and went up to the senior Ohioans, intoxicated from the tailgate, to slur apologetically on behalf of the student body).

The actions of Sandusky and the inaction of president Graham Spanier, other administrators, and Joe Paterno have left me questioning whether I was too eager to soak in the sense of community, overlooking the vulgar tailgate behavior and other questionable incidents. “Everyone else does worse” was a frequent justification when reports of some misbehavior surfaced. All the while, as people tutted over an occasional DUI by a player and the administrators were engaging in a cover-up, I defended my school, telling myself that I was getting an Ivy-quality education for a fraction of the student loans and bristling with hurt pride as people said “Oh, how fun” when I told them I attended Penn State–an attitude I dismissed as elitist. I moved on from academic snobbery over to another variety of superiority, that of the everywoman.

What most aggravated me in the days following the revelations last week was the Penn State community response. The riot in Beaver Canyon–something I saw happen once or twice during my student days in response to a win or a loss–was a national embarrassment. Rather than discuss their grief over Paterno’s failure as a moral leader and admit their hero made an egregious mistake when he most needed to demonstrate his high moral character, Penn State students initially closed ranks, creating an us-versus-them mentality. It is surely too pat to say that the students followed the Kübler-Ross stages of grief: reacting first in denial, then anger, before settling into the uneasy acceptance displayed at Saturday’s game. (There was some bargaining involved, too, with the pleas to let Paterno finish out the season.) The mental gymnastics involved with forgiving Paterno have been extraordinary.

Unable to take part in that magical thinking, I find myself once again an outsider, deprived of that sense of identity that comes from belonging. My old sweatshirt lies in closet purgatory, its future uncertain. I have spent days trying to explain the world’s intensely negative reaction to Penn Staters and the violent Penn State reaction to the rest of the world (well, my small world). I’ve not succeeded in translating the differences properly to either side. So I sit in the middle ground–the unhappy, slightly lonely space that I occupied before I made Penn State such an integral part of my identity.