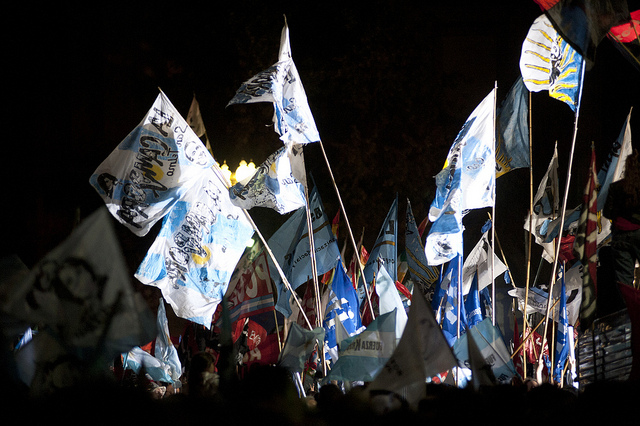 Tony Soprano: It’s good to be in something from the ground floor. I came too late for that, I know. But lately I’m getting the feeling that I came in at the end. The best is over.

Dr. Melfi: Many Americans, I think, feel that way.

For more than a decade I had heard about how great The Sopranos was. So earlier this year I finally decided to give it a try. And how shocked I was when, just four minutes into the pilot, and right after Soprano and Melfi shook hands for the first time, the above exchange took place! It sounded so familiar … I mean, this is a guy of Italian descent complaining about how the present, although richer and more comfortable, is nevertheless worse than the past. It was the incarnation of the Argentinian spirit.

Growing up in Argentina entails continually practicing historical revisionism and indulging in nostalgia for our bygone greatness. Actually, it is more like nostalgia for the greatness we feel entitled to, but were somehow deprived of. Argentina’s psyche resides permanently in the land of “should have, would have, could have.” If neighboring Brazil is the perennial country of the future, Argentina is the country of the perennially golden past-we are obsessed with looking back to a time (say, a century ago) when our GDP was comparable to that of European powers, and scratching our heads as to how we could have blown it ever since. If only …

Argentina is the dean of the club of nations utterly obsessed with their decline, so it is our distinct pleasure to welcome the United States to our dour fraternity-go ahead and take your place, there, alongside France.

Welcome, but brace yourself for lots of snide comments. I for one am sick and tired of hearing: “Japan is an example of how much you can do with so little; Argentina is the other way around.” Then there is the equally annoying: “Australia is what Argentina could have been.” Brazilians, meanwhile, make me cringe with their subtle invitation for Argentina to become “their Canada.”

But tough global times make Argentina’s experience seem, well, universally relevant. That’s why our current president takes advantage of every opportunity she has to preach to the rest of the world-and, more importantly, to the rest of the G20 countries-about the “Argentinian model.” It is not a model of development, that’s for sure. It is a model of resilience.

You see, Argentina is a part of Europe in exile-or on probation. So when we look at Greece, we smile. We immediately and instinctively know what all that mess is about. We look at the Spanish indignados as brethren, since we are the perennially outraged. And “Occupy Wall Street” seems to us to be the Hollywood version of “Que se vayan todos,” the movement that unseated President De La Rua a decade ago, and allowed our country the rare privilege of having five presidents in one week. See, America, you still have a ways to go.

And don’t worry, obsessive decline isn’t all bad. It’s a bonanza for booksellers, shrinks, and pessimistic political analysts. It turns taxi drivers into philosophers. It seems to do wonders, as well, for red meat-and-wine consumption, not to mention late-night, angst-ridden café conversations. Buenos Aires does late and angst like no one else. Maybe Kansas will see the emergence of its own tango-like melancholic dance.

But for you Americans to join the club of the obsessively declining nations, there is still one thing you must do. Senseless wars, reckless fiscal policy, and cultural decay aren’t enough. You must also shed your quintessentially American core belief that you can reinvent yourselves. Yes, you must give up what Roberto Unger and Cornel West have described as “the American religion of possibility.” This idea that it is the natural order of things for your democracy to fulfill an ideal, and for individuals to become fulfilled themselves? Forget it if you know what’s good for you. It is an obstacle to the full enjoyment of decline that comes with resigned fatalism.

That American religion of possibility is what those of us elsewhere have most admired about the United States throughout history. Now that this faith is in retreat in your country, Argentinians can appreciate how it evokes the sense of possibility that once upon a time also drew millions of immigrants to our shores. We’re so wrapped up in our historical drama, it is difficult to ascertain how great we really were, or for how long. But people from all over the world did come here in search of happiness and fulfillment. Most of their children still love this land. Our neighbors like us more than they are ready to admit. Maybe, someday, we can still achieve greatness, or at least an equilibrium where the humor and angst involving our “might have beens” will become more folkloric, and less wrenchingly poignant.

It isn’t quite reinventing the notion of reinvention, which may still be within America’s grasp, but it might be enough to make the Tony Soprano in all of us feel a bit better.

Gabriel Saez is a legislative advisor to a member of Argentina’s National Congress.