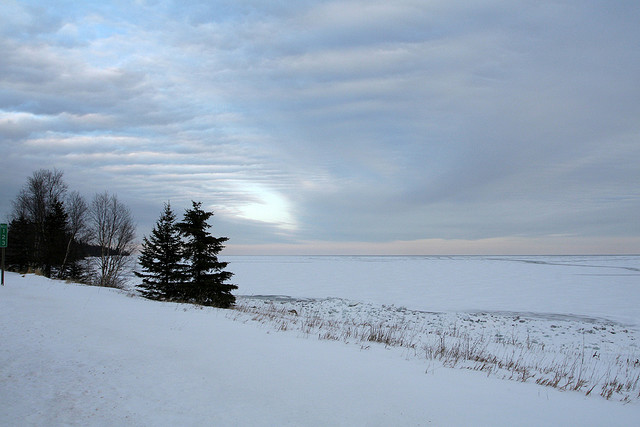 I live in L.A. and New York, but I was born in St. Paul, Minnesota, and I go “home” often. My daughter, born in L.A., loves Minnesota, especially the cold and snowy winters that I once fled. My late husband was charmed by the fact that everyone in my very large family there lives on a lake. He loved the snowmobiles in winter and the speedboats in summer.

My father and mother “came up” during the Depression. They grew up in North Dakota on the prairie. My mother was from a farming family in Wyndmere. They owned a large farm but were cash-poor. Like her father, the son of Czech immigrants, my mother was a lifelong Democrat.

My father came from a strict and forbidding Norwegian mother and a charming entrepreneur father who was alternately successful and ruined. My father was a “self-made” man, a Republican who believed, as Republicans once did, in fiscal responsibility, separation of church and state, and limited government. He was pessimistic about people and suspicious about fun.

Throughout my youth, I was a kind of natural anarchist and a dreamy follower of Blake (once I left Catholicism behind). My mother liked to recite page after page of Milton, Tennyson, Longfellow, and Dickinson, and I grew up in a rocking bath of words, pushed on a swing to the words of Robert Louis Stevenson’s “The Swing”–out and back into the air, back and forth inside the poem itself. I became a nominal Democrat and an awkward rebel. My father and I argued bitterly.

Now that my father is gone, my siblings (I have four brothers and a sister) have inherited the split political affiliations of their parents. My eldest brother, a retired judge, lives just one door away from my mother on a quiet lake. (She remains feisty and outspoken even at 95.) Recently, after visiting my mother one afternoon, I strolled over to his place to say hello. This is always delicate, for my brother is anti-gay, anti-feminist, pro-life, and pro-Michele Bachmann. We see eye-to-eye on almost nothing.

He was in his yard, surveying some recent repairs to his roof. A tree had fallen on it during one of many freak storms popping up everywhere lately. I made the mistake of trying to tease him. “Now maybe you believe in global warming?” I asked.

He turned to me and pointed a finger in my face. “That’s all a lie!” he shouted. We were off. I pointed out some of the crazy things that Michele Bachmann believes. “You are a liberal, elitist socialist,” he sneered. “Straight from Obama’s playbook.”

This stopped me. I asked him how he could he call his own sister these types of names. “You don’t know me,” I said. “What you believe precludes knowing anyone who doesn’t share your views.”

I left shaken, bewildered by the chasm between my brother’s beliefs and mine. Two sides in one family, two sides in the nation. What used to be civil debate in a healthy two-party system is now, so often, destructive and bitter conflict.

I thought back to a visit I’d made with my mother, years earlier, to my brother’s courtroom. He was a juvenile court judge in St. Paul. My mother and I watched case after desperate case of troubled and violent and lost youth come before him. The last case he heard that day involved a mother pleading to have her son, a tall, sweet-faced fifteen year-old, taken away. “Please take him,” she begged. “Just take him away. I can’t handle him. I’m a single mother. We’ve been in this court so many times. He stole another car. He and his friends were drunk. I can’t do this any longer.”

My brother asked her to think carefully about what she was doing. Then her son got down on his knees and wept. His sobs, loud and hoarse, racked the courtroom. “Please!” he sobbed. “Please, Mom! Don’t give up on me!” The mother stared straight ahead at my brother. “Just take him”, she said, “Just take him.” She turned and walked away, and her son was remanded to state custody.

Day after day, my brother saw this sort of thing. Maybe his outlook today springs from a yearning for its opposite: for order, for tough love, for the preservation of family life.

When I was a young poet, I founded a poetry program in prisons in New York. This was my way of trying to figure out how to confront alienation, how to help the lost and the forgotten. It was hopelessly idealistic, and my brother scoffed, but I do think that in some cases, it provided clarity and comfort to people. I hope so, at least.

The human heart is divided, and all of us can be of two minds. We call ourselves “right” and “left” in our politics–but we are two, separate and the same as twins. Like twin cities, mirroring each other, but alien, and apart.

Carol Muske-Dukes is the current Poet Laureate of California and a professor at the University of Southern California. Her latest book of poetry is Twin Cities (Penguin Poets Series, June 2011).