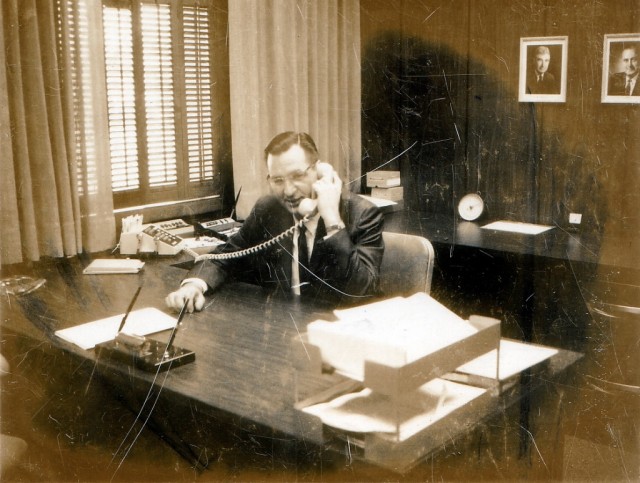 In 1941, my grandfather drove across the country from Detroit to California to deliver a car and see the World’s Fair in San Francisco. There were no highways, the car broke down constantly, he slept in fields, and he said it was the best trip of his life. He hitchhiked home with a bathing suit salesman. Three years later he landed in France in World War II and marched into Germany. “Patton was right,” my grandfather told me. “We should have gone after Stalin when we had the chance.” After the war, he got married in his uniform and took a job at Sears, where he would work for 38 years. When he retired in 1982, he moved into a house in Caseville, Michigan, where our family’s fishery once stood, and he served as township commissioner and knew everybody by name.

My father followed in his footsteps. Except the war was Vietnam and Sears started offshoring its manufacturing. My dad changed after he lost his job, moving among various retail positions and keeping to himself, hardly speaking at all.

And me? I spent a summer working the cash register in the lighting department at Sears, but I’ve had 28 jobs since I started working at 15, ranging from the night shift at a gas station to selling Oriental rugs to teaching graduate school to running a graphic design studio. I’ve never gone to war, and I’ve never been punched. My life feels insulated, detached from responsibility, and the effect is compounded by the fact that most of my activities are conducted in front of a computer screen.

I am a million miles away from my father and grandfather, who played by a different set of rules: a belief in country and companies, a dogged faith in firm handshakes and settling down.

In 2004, I began driving through America. I wanted to understand my country and my place in it. After 55,000 miles of searching, I wrote a big book about my journey, and then I drove another 15,000 miles this summer, talking about the big book to small audiences. Although I came to understand my country a little better, the dignity of my grandfather seemed even more remote.

What kind of man should I be? This question nagged me late at night while I drove along empty back roads, staring into the scrolling asphalt. I’d follow the yellow line and let my mind wander through montages of old movies, advertising jingles, and tattered photographs. Cary Grant lighting a woman’s cigarette. Brando and Dean posing in white T-shirts. Eastwood’s parched stare. An unsettling amalgamation of Stallone and Schwarzenegger, rippling with sweat and unloading a belt-fed weapon.

I wanted dignity, grit, muscle, and grace. I waited patiently for enlightenment at scenic viewpoints all over the country. The Grand Canyon. Yellowstone. Glacier Park. Big Sur. I’d time my arrival for the magic hour, the moment when sunset gave everything a movie-star glow, and I’d listen to sentimental music along the way, making sure everything was perfect for my big moment. Key West. Death Valley. The Smokey Mountains. I waited, but the flash of insight did not arrive. This is what happens when you watch too much television.

Along the way, I absorbed countless billboards, posters, and neon signs. They told me that a real man is attractive but does not worry about such things. He is responsible yet impulsive. A loner yet social. You’ll find him at the end of the bar telling stories and slapping backs while catching the eyes of women, yet he’s also standing alone near a fence somewhere on a ridge, gazing at Wyoming or Montana. He built that fence himself because he’s self-reliant and good with an axe. These are the images attached to our khakis, family sedans, and mutual funds. They tell me to be aggressive yet sensitive. They tell me I don’t have sex enough. They tell me to develop six-pack abs and wax my chest. They tell me to wear baseball caps and eat all that I can.

I rifled through shoeboxes of old photographs, looking for answers. Here’s a black-and-white snapshot of my grandfather standing in the driveway with his two children tugging at his knees while my grandmother smiles in the doorway of a ranch house. My grandfather’s hair is neatly parted, and he’s beaming. He has a family, medals from the war, and a steady job with a company where he will work for several decades. He has a neat lawn and a sprinkler. He’s got a big Buick with fins. He is only 28 years old, yet he’s somehow older than I’ll ever be.

On my car radio, Bo Diddley says his grandfather picked his teeth with a hunting knife and wore the same suit all of his life. I see a distant trailer in the middle of the desert and wonder if that’s the place for me: rugged, remote, elemental. Then I think about the time I ran away when I was little. My mom said running away was fine, so long as I didn’t cross the street.

In Minneapolis, an old man told me that men got confused when they abandoned cities for the suburbs. I thought about this while I drove, paying attention to the faded names painted on old brick buildings, those mint green cursive names like Jerry & Sons Hardware Supplies or Robinson Bros. Manufacturing, those muscular names that made sense compared to today’s childish vocabulary of tweet, Google, and blog. It’s difficult to feel dignified among our new language.

Where does dignity come from? I thought I’d find it at the edge of a mountain or canyon. Instead, I found it in the Rose Reading Room in New York. I found it in the town squares of places like Oxford, Mississippi or Brady, Texas. Go to any downtown and stand in the ballroom of its oldest hotel and take in those columns and soaring ceilings, all that wood and brass.

At a book signing in Pasadena, a tipsy man walked up to me waving a copy of The Sun Also Rises. “You know what Hemingway understood?” he asked, leaning over the table. “Don’t talk too much. Keep your feelings to yourself. That’s how it was back then.” I’d just finished reading parts of my book to a small audience. I’d answered all kinds of personal questions during the Q&A. Now, sitting at that folding table with a stack of books and a Sharpie, I felt overexposed. The man slid The Sun Also Rises across the table for emphasis and walked off, mumbling, “Silence, man. That’s how it was.”

My hand went to my pocket. Whenever I encounter a troubling thought, I pull out my phone. It’s become a dumb reflex that borders on the neurochemical, this constant jones for a hit of fresh data to distract me. But this time I stopped mid-pocket. I thought about the things I do on the Internet. The status updates, the likes and tweets, the compulsive monitoring of inboxes and feeds. All of my chatter boils down to I’m here. Pay attention to me. I turned off my phone and drove to the next event.

In the rearview, Nebraska trucks came over the ridge at sunset, and I fantasized about dialing 1-800-USA-TRUCK and hauling freight for 89 cents per mile. My mission would be clear: get from point A to point B. At a gas station in Wyoming, a giant bearded man in spurs was telling the cashier that he’d just completed his seven-day yoga challenge.

A few hours after my final book reading, I stood on an empty street in Salt Lake City, cradling the phone as my father told me that my grandfather was in the hospital. Instead of pointing the car south towards my home in New Orleans, I sped east to Michigan, where my grandfather lay fighting off pneumonia. I did not drive fast enough. I stood in the parking lot of a horrible chain restaurant in South Dakota and wept when I got the news.

James A. Reeves Sr. died on September 21, 2011 at the age of 88. He taught me how to fold the American flag into a tight triangle. He taught me how to tie a cleat hitch on a sailboat and how to varnish wood until it looked like warm liquid. For six weeks, while touring for my book, I drove across the country showing his photograph to strangers in bookstores. My grandfather in uniform, saluting in front of a plane with a pin-up girl painted on the fuselage. My grandfather sitting at his big desk at Sears, holding a black rotary phone, hair neatly parted, black-rimmed glasses, and flashing that grin that always made you feel good, like you and he were part of something. I talked about how he inspired me, how he defined a type of masculinity that now seems lost: a faith in nations, companies, and handshakes.

After the funeral in Caseville, we filed out of his little church into the cold rain and watched the American Legion perform a 21-gun salute. A half-circle of World War II veterans saluted the American flag and fired their rifles. They folded the flag into a triangle, marched forward, and presented it to my father. The ritual comforted me. I envied it. People I did not know clasped my shoulder and shook my hand. “A grand and honorable man,” they said.

Driving home under a gray sky, I struggled to connect the dots. Silence. Dignified towns. The stern handshakes and the gunshots. I missed my grandfather. And I mourned the loss of what he represented–a life of clear steps: service to a nation, then a company, then a family. Many men rejected this narrative, of course, but it nonetheless provided definition, some sort of plot. Today the storyline has splintered, which is exciting because believing in a nation or a corporation is a strange thing to do. Yet we’re left searching for new things to believe in. We’ve been atomized and polarized, and our technologies reinforce this, encouraging the short burst and the inward glance.

In the middle of the desert at the far edge of a line of thundering sprawl, I saw a gigantic red blinking sign telling me to like Walgreens on Facebook. I hit the brakes and cut the ignition. Maybe this was the scenic viewpoint I’d been looking for. Amid the silence of a vast desert I was being asked to like Walgreens. I watched the sign blink for a while, then started the engine. How do you become a dignified man in America? I still could not answer the question. But I knew I would return to my new home in New Orleans and focus on creating better public spaces. And I’d look for ways to embrace silence, to slow down a little. This would be my answer for now.

James A. Reeves is a writer, designer, and motorist. His first book, The Road to Somewhere: An American Memoir, is now available from W. W. Norton. He writes at Big American Night and is a partner at Civic Center, a civic design studio that champions cities.

*Photo courtesy of James A. Reeves.