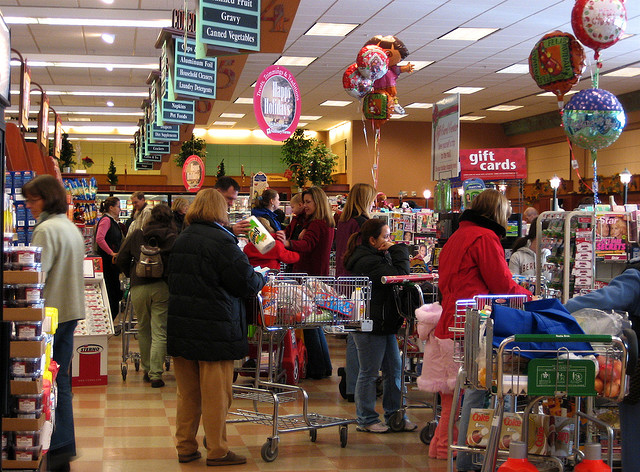 If you’re like millions of Americans during the holidays, you’ve had to wade through a crowded grocery store gathering up cooking supplies. Hard as it is to believe, though, supermarkets used to be billed as pleasure palaces.

In 1964, at the height of post-war consumer society, the mass-circulation monthly Look featured Publix supermarkets and the supposedly effortless shopping that they made possible. In these stores, “the harried housewife” could “drift gently among four-deck ‘gondolas’ bearing 12,000 of the [food] industry’s seductive products.” Look highlighted two indications of the stores’ success: the owner’s “personal fortune” ($8 million) and the happiness of everyone at the store. Even the employees were happy, Look explained, because “the customers they please are, in return, nice to them.”

Many other Americans subscribed wholeheartedly to this vision. Even critics of postwar consumerism assumed that stores–and their customers–were pacified by their surroundings. In his 1957 best-selling exposé of advertising, The Hidden Persuaders, well-known social critic Vance Packard entitled the chapter on supermarkets “Babes in Consumerland” and described women walking past old friends and neighbors without seeing them, moving as if in a trance through the “fairyland” store.

Like so much else about the 1950s and 1960s, these accounts of supermarkets are charmingly alien to the modern eye. Today, grocery shopping is one more chore among many chores, and almost no one looks forward to a trip to the supermarket–if anyone ever did.

However, the popular conception of smooth-running, streamlined supermarkets created an important legacy. In the minds of many Americans, grocery stores occupied a sphere that was outside of politics, power relations, or public life. Instead, the stores merely stood for effortless, pleasurable, mindless, and resolutely apolitical modern living.

The powerful countercultures that arose in the late 1960s and 1970s cemented this view of supermarkets, using them to represent the mainstream–and all the feelings of alienation and ennui that the mainstream awakened in the outsider. The Clash, for instance, sang in 1979 that they were “lost at the supermarket.” Supermarkets, whether they wanted to be political or not, symbolized the powerlessness many people felt in the face of modern life.

Injecting politics into the food-shopping experience wasn’t unprecedented. In fact, the visions of seamless and effortless food shopping that entranced so many in the decades immediately following World War II were an aberration. For most of human history, including most of American history, obtaining food was difficult work that required interaction with other people who might not necessarily want to help you. Nineteenth-century public markets were sites of exciting interaction–but also of tension and frustration. City governments both created and governed these spaces, which meant that politics always intruded.

Small neighborhood grocery stores had their own tensions. Relations between clerks and shoppers were unpredictable. Sometimes they were allies, rallying together against a bad store manager, and sometimes they were adversarial bargainers. Food prices were also politically touchy. When staple goods got expensive in the years after World War I, citizens started demanding that local governments find a way to lower prices. Grocery stores have long been important nodes of community, but they have also been places on the front lines of political frustration.

Politics have not disappeared from grocery stores. A few months ago, a near-strike by workers at Ralphs, Vons, and Albertsons stores in Los Angeles made clear that labor tensions are still running strong at regular supermarkets. And that’s just one example. We also see drives to make supermarkets post nutrition information on their shelves, discussions about the balance grocers ought to strike between the fair treatment of workers and organic compliance, and arguments over the role of government in bringing any of this about. If supermarkets were ever smoothly running pleasure palaces, they sure aren’t now.

One thing has changed. Now, many of the tensions manifest themselves outside of stores themselves. Rather than complain to managers, bargain with clerks, or demand changes to store policy right away, customers tend to leave and do their campaigning and complaining outside the store and through electronic media. They’ll make phone calls, send emails, post online, or complain informally to friends. Things would have been far more direct in the 1910s or 1920s. Part of this is because communication is easier, but in part it’s also because stores tolerate less overt confrontation today. For instance, shopping malls–those other icons of public consumption–are more heavily policed than ever. Loud complaints or protests are the (often unwelcome) exception in grocery stores.

With all the politics and hassles surrounding our food stores, Americans have been seeking out the old supermarket ideal–in which provisioning is a relaxing and apolitical pleasure–in new formats. Recent alternatives have included small stores and farmers markets, which are celebrated for restoring the pleasure to shopping and rekindling the warm fires of community.

But with something as fundamental as our daily bread, protest, demands, debate, and confrontation will enter into the picture. Grocery stores will always, however subtly, be places of politics, interaction, and tension. But it is not a failure that they are so. It is a tribute to Americans’ demands for liberty and the dynamism of public life. It’s a good thing to be thankful for, even as we wonder, amid all the cart jams and skyscrapers of candy canes, why we ever went shopping. Seeing stores as political spaces can transform how we understand their possibilities–and our own.

Tracey Deutsch lives in Minneapolis, Minnesota where she is an associate professor of history at the University of Minnesota. She is the author of Building a Housewife’s Paradise: Gender Politics and American Grocery Stores in the Twentieth Century.