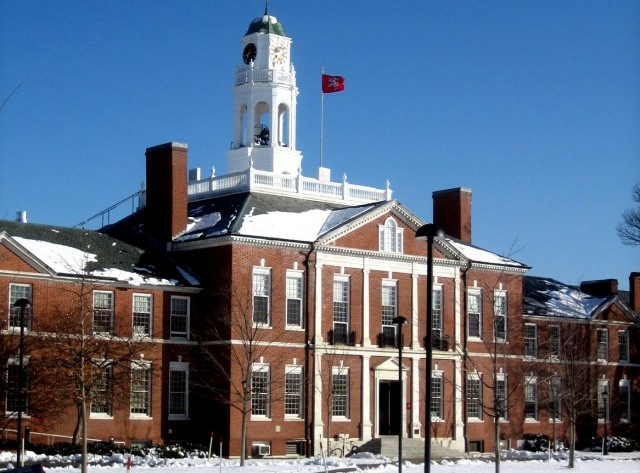 We hear so much about presidential candidates–and so little about life in the states that elect them. In “Beyond the Circus,” writers take us off the trail and give us glimpses of politically important places. Today, New Hampshire.

New Hampshire has been in symbolic identity limbo since the natural landmark known as “The Old Man of the Mountain” crumbled and plummeted a few years ago. The famous granite outcropping near Franconia Notch, with a little imagination, suggested a stern, curmudgeonly male profile. Maybe you’ve seen it on the state coin, its image chosen for the series of quarters issued in 2000, three years before the face literally dropped from the mountain. Bad timing. The anthropomorphized cliff was, in fact, mortal. So much for the state’s stoic resilience, also memorialized on those quarters and on our state license plates–“Live Free or Die.” Little did John Stark, Revolutionary War general, realize when he uttered those words that he was coining a crutch for all political journalists swarming across our state every four years, even if many of the state’s residents might find the motto a bit extreme. Or maybe it is just too abstract. “Live Free or Die” is a more elusive concept than simply riding your Harley without a helmet, or not having to pay any state taxes.

New Hampshire looks small on the nation’s map, but the state seems awfully big–again, elusive–when one tries to gauge and sum up its political ethos. Listen to reporters interviewing people on the street and you get the usual NH paradoxes (our identity is that we don’t seem to have one), and the dependable Yankee clichés: fiercely independent, unpredictable, stubborn, ornery, and so on and so on–cut to license plates. But the three 80-year-old guys who bag my groceries at the Market Basket are among the most polite and personable people I’ve ever met. There is a strong sense of community and cohesion here, as binding as any other I have experienced elsewhere, with people pretty open to newcomers and outsiders. Dour New Englanders? I don’t think so. With any state, it’s not that easy or tidy to generalize, and, like a good poem, that element of mystery is a source of gravity for public attention.

The minute you try to nail New Hampshire down, its face is going to fall off.

Though New Hampshire is home to the nation’s first naval shipyard, there are still New Englanders who are surprised to learn that the state even has a coast. Most likely it’s because our coast is the country’s smallest. I moved to New Hampshire in 1995, but it was not necessarily to be near the ocean, though I admit, after teaching just north of Chicago for a year, I missed the Atlantic. My whole family did. I was born in Burbank, but grew up on the North Shore of Massachusetts and the South Fork of Long Island, and spent most of my childhood in or on top of their surrounding waters. When I started my new teaching job at Phillips Exeter Academy in New Hampshire, my wife and I assumed that we would have to rely on neighboring states–the marshy coves and muscular barrier beaches of Cape Cod or the foggy bays of Maine–for our aquatic escapades.

New Hampshire, in our minds, was all about mountains–the White Mountains, specifically. Skiing. Covered bridges. Balsams, spruces, maples in full conflagration along the Kancamagus Highway. And, yes, lakes that were comprehensible, like Winnipesaukee and Squam (“Golden Pond”), not the Midwest’s city-fringed freighter graveyards. The prospect of exploiting all of the state’s iconic environmental elements fueled our lumbering late-model Volvo’s odyssey “back East.” Some 17 years on, I’m embarrassed to admit that I’ve rarely taken my kids up North. When they were younger we did some hiking in neighboring Vermont, but we found our corner of New Hampshire awfully sticky. Exeter sits in the oft-overlooked “Seacost Region” down the road from the idyllic seaport of Portsmouth, the home to countless antique stores and (randomly) the peace treaty that ended hostilities between Japan and Russia a little more than a century ago. There’s enough to keep us busy within a 15-minute radius. And plenty to keep us confused, too, which is probably why we’re still here.

If New Hampshire has a persona, it is not usually derived from its coast, though our diminutive 12-mile chain of rocky points and crescent beaches (18 miles including the Great Bay and Isles of Shoals) is becoming more popular, more confusing, and more prohibitively exclusive. From where I live, I can walk to at least three substantial trailer parks and a Jaguar dealership. Twenty years ago, you could still get away with calling our region part of “Cow Hampshire.” There was still open land. Real estate was cheap. The neighboring towns still had that weary, post-industrial, defunct New England mill town pall. But a lot of people have moved here since 1995; the roads have been widened, traffic lights quadrupled, and the refurbished shopping centers have exploded with all the predictable strip mall retailers. With the traffic, it’s faster to ride my 1973 Raleigh Sprite across town rather than drive. How could anyone appreciate the heart of the Seacoast if they’re ripping through up I-95 in the time it takes to down a Coke en route to the outlet stores in Maine, or some hip restaurant in Portsmouth they’ve read about in the Boston Globe?

My first foray into New Hampshire was back in the summer of 1972, when my parents sent me across the border from Massachusetts to hockey school. I was 12 years old, and it was the first time I’d spent any significant time away from home, but I was game. Skating was all I wanted to do back then, and I banked on playing hockey 24/7 as a distraction from any domestic longing. The first of two troubling ironies: I did become profoundly homesick and spent a good portion of my stay in Hampshire (when I wasn‘t slathering Bengay on two pulled groins) with knees tucked under my chin, alone in the corner of an empty squash court. The second irony: I had become profoundly homesick on the very campus that I would eventually make my home and where my own kids would grow up. I knew almost nothing about Phillips Exeter Academy’s history, its monolithic importance as one of the country’s oldest and–here we go again with clichés–“prestigious” boarding schools. I had no idea that men like Todd Lincoln, Arthur Schlesinger, and John Irving had gone there. I probably didn’t know who those people were. Nor would I have known or cared then that the two-century-old school was the setting for the iconic novel A Separate Peace. All I knew was that it had two state-of-the-art ice rinks.

In our free time between meals, sessions on the ice, or in the weight room (and when I wasn’t pining away for my parents and dog), I’d wander downtown with a broken hockey stick to bludgeon lamprey eels that were making their way up the Exeter River from the tidal Squamscott. This was my true baptism in New Hampshire: violent, visceral, and completely adolescent. So, it’s sort of a miracle–or maybe fate–that I am here today writing this not only 200 yards away from where that shameful estuarine massacre transpired 40 years ago, but also in the epicenter of the last place I would have called home.

My father had wanted us to embrace New England’s hearty brand of athleticism, and I did my part by losing myself to hockey. But, if he were still alive, how would he react to my return to surfing as a result of living in New Hampshire?

Because it’s just out of the “shadow” of Cape Cod, New Hampshire receives decent swells rolling in from the storm incubator off the coast of Africa, which launches its wave machines spiraling up the Atlantic seaboard. People might be confused when I mention surfing in the same sentence as New Hampshire, but they’re even more incredulous when I tell them the waves are actually pretty good here. Especially in the fall and winter. One of my surfing partners and mentors, an Exeter student from Costa Rica, was, on occasion, stunned speechless by the peeling green, head-high perfection which greeted us as we pulled up to “The Wall” in Hampton.

Surfing has kept me facing east, prevented me from making more forays west or north. Right now, the water temperature is around 45 degrees, kind of warm for this time of year. In a month, it’ll be down somewhere around 38. This is the time to go. The surf shop (Cinnamon Rainbows) closes at five now, French fades from grocery line chatter, the Canadian tourists, for the most part, gone. The favored breaks are noticeably unpopulated, except for a few familiar faces. Sometimes, a big gray Stratotanker from the National Guard Refueling Squadron at Pease Air Force Base (between Newmarket and Portsmouth) swings in low and impossibly slow from the ocean, its distinct nozzle protruding like a blunt stinger, a stunted tail. Another of my surfing buddies flies one, and when I haven’t seen him for a few weeks, I always wonder if that’s him, back from deployment in Qatar or Spain. I usually get a text from him in an hour or so, after I get out of the water, when I’m able to taunt him, tell him what he’s been missing.

In the fall, there’s something sublime about viewing the sparks of foliage as you bob in the line-up, glancing back to shore before the next set reveals its texture on the gunmetal horizon. Giant V-shaped formations of Canada geese undulate south, and I am lost in their melancholy off-key honking before it’s drowned by the closing of the waves I’ve ignored. In winter, it’s pretty lonely out there, except for the sea ducks arriving from their migration: buffleheads, mergansers, goldeneyes, scoters, eiders. And the hapless harbor seal trying desperately to establish eye contact. All of this scenery is made bearable by a six-millimeter wetsuit with seven-millimeter gloves and booties, if the wind chill isn’t too bad. When the air temp drops below 30, a beard helps, something to augment the coat of Vaseline, to give the illusion that your cheeks, lips, and chin are protected (here on the coast, we have our own variation of faces falling off).

Notwithstanding General Stark, New Hampshire hasn’t always lived free or died. That motto only replaced the previous one, the generic and shamelessly unimaginative “Scenic,” in 1971. Not that “scenic” was inaccurate, mind you, even if almost any state would want to claim the label. Scenic captures my drive through Seabrook on Route 1A on my way to surf with Matt, a colleague and friend whose family has a house there. The great dome of the nuclear power plant looms over the frozen marshes and flats, over the few remaining lobster boats moored in the harbor. It’s a complicated beauty. I want to savor it, but I’m itching to get into my suit. That’s New Hampshire. The country keeps wondering what this state’s role will be in the election this year. “What will those obstinate Yankees do this time?” people are asking. Some of us will be surfing, of course.

When not surfing, Ralph Sneeden teaches English at Phillips Exeter Academy. He is the author of Evidence of the Journey, a collection of poems.