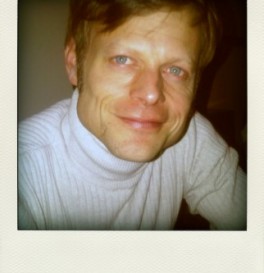 Andreas Kluth is licensed to be omniscient, humorous, brief, and anonymous. He is, in other words, a correspondent for The Economist, the fabled English magazine. He’s their man in Los Angeles.

If he didn’t work at The Economist, Kluth would still be precisely the type of cosmopolitan his magazine would want as a reader. Born in New York, he grew up in Germany, studied at Williams and the London School of Economics, and met his Taiwanese-American wife while working in Hong Kong. At home in Santa Monica, he and his wife speak to their three young children in English, German, and Mandarin. God knows how they’ll get by without Spanish.

Kluth, of angular features, piercing blue eyes, and a stark white turtleneck, downloads these vitals as he drinks a $20 glass of Lateral Bordeaux at Rustic Canyon, a sleek eatery on Wilshire that he thinks is the closest L.A. comes to Berkeley’s Chez Panisse. It’s early, and the restaurant is only starting to fill up with a fashionably casual crowd. “It’s good without being pretentious,” he proclaims.

That might also describe The Economist, which has attained retro chic by eschewing localism for a global reach, refusing to dilute its brand by running bylines, and remaining defiantly profitable. It also insists on calling itself a newspaper.

Kluth says the anonymity can be empowering at times, frustrating at others. It’s heady to write on behalf of a 170-year-old institution that spans the globe, especially when you find yourself writing an authoritative “leader” (that’s “editorial” on this side of the pond) in the royal “we.” The lack of writers’ names on all features helps keep egos in check, reaffirming a culture in which ideas live or die on their merits as opposed to their authorship.

Even without individual voices and personalities, the magazine oozes voice and personality, a trick others seek to emulate. At most publications these days, with the possible exception of Us Weekly, top editors run around telling their troops they “need to be more like The Economist.” Smart, mischievous (I will never forget the “The Trouble with Mergers” cover years ago depicting two elephants in flagrante), and profitable: who could ask for anything more?

Kluth left a job in banking to join the magazine in 1997. He paid his dues in London before heading out to Hong Kong and then San Francisco, where he covered techland (a realm especially “fawning”-Kluth’s word-toward the weekly). He has been in L.A. since 2009 but is quick to admit that with three young children he hasn’t been able to experience the city the way he got to know other cities, which is to say at 3 a.m. His L.A. pet peeve is the texting-while-driving epidemic, “because it screams ‘I am more important than you.’” Among his favorite gems: Will Rogers State Historic Park and the bustling “ethnoburbs,” the antithesis of the sleepy Munich suburb he grew up in. (But I perk up when he mentions that a neighbor was German soccer legend Karl-Heinz Rummenigge).

Kluth’s most ambitious work since being posted in Los Angeles was last year’s special section on direct democracy in California, but his writ extends beyond the state to much of the West. He recently profiled New Mexico’s Latina governor (“Calling her a wonk might have been a stretch, I’m afraid,” he now admits), and he has done his share of only-in-America stories about Arizona. London can’t get enough of Maricopa County’s Sheriff Joe Arpaio.

So what makes a great Economist story? “Ideally something interesting, quirky, contrarian, and revelatory about a place’s core truths,” Kluth says. Oh, and it has to be as interesting to readers in Kuala Lumpur as it is to readers next door.

“PR people have given up trying to pitch me,” he says, laughing, “which is a good thing.”

Kluth admits the brevity of copy can be frustrating, especially for stories on which he’s done enough reporting to write a 10,000-word, New Yorker-style feature. But the annual Christmas issue, in which the editors double down on whimsy, is a welcome platform for the magazine’s writers to stretch beyond their normal range. Kluth’s all-time favorite story was one he wrote for a Christmas issue on “the anthropology of happiness,” a look at why Filipino maids in Hong Kong were found to be happier than their affluent Chinese bosses.

Kluth jokes that the magazine’s “one for all, all for one” culture has an unexpected flip side: it drives his colleagues to write ever quirkier books to reassert their own identities. I’m reminded that one of my favorite books is a brilliant speculative biography of Pontius Pilate by Economist editor Ann Wroe.

Kluth has just published a genre-bending book of his own. It’s called Hannibal and Me: What History’s Greatest Military Strategist Can Teach Us About Success and Failure. Don’t be fooled by the tidy subtitle, a merciful nod to booksellers in need of guidance on which shelf should hold the book. It’s not some pat motivational pamphlet to be placed near the checkout line. It’s a compelling blend of memoir and history, aspirational literature and psychological profile.

In case you need reminding, Hannibal crossed the Alps to sack Rome through the back door. With elephants! When he was 29! I admit to Kluth that all I remember about Hannibal was that he came from Carthage and crossed the Alps with elephants; I never knew the part about his being 29. But that’s one reason Kluth was drawn to his subject: almost no one knows much about him. Or about what happened next: Hannibal flailed about Italy for years, never quite exploiting his victory to the fullest. “He confused tactics with strategy,” Kluth explains.

Kluth is not so much obsessed by military strategy as he is by what he calls people’s “life trajectories.” The book opens with a poignant-hilarious or discomforting, depending on whether you like your job-account of how stumbling upon a Hannibal documentary on TV made Kluth reassess the meaning of success. He was “thriving” at a London investment bank, and then he decided to make a leap to journalism.

Of course, bookstores are crammed full of tracts on how to succeed in life and (sign of the times?) how to embrace, and learn, from failure. Hannibal and Me is all about the difficulty of telling one from the other. There is plenty of Hannibal in Kluth’s tale, and it is a rollicking story, but the real inspirations for the book are Rudyard Kipling and Ludwig Erhard.

Kluth’s favorite poem, Kipling’s “If,” contains the lines that underlie the book’s quest:

Ludwig Erhard was West Germany’s first postwar economics minister, acclaimed father of the Deutsche Mark, who later became chancellor. But to Kluth, Erhard was “Uncle Lulu,” the great-uncle who raised his dad. Erhard, unlike Hannibal, achieved success later in life, as a middle-aged man trying to build a redemptive society on the ruins of The Third Reich.

Hannibal and Me compares the life trajectories of “early peakers” such as Hannibal, Picasso, and Meriwether Lewis with the steadier, more gradual ascent of “wanderers” like Harry Truman, Eleanor Roosevelt, Paul Cézanne, and Uncle Lulu, with an eye towards seeing how people “self-actualize.” What’s key for Kluth is whether people are able to “transcend success and failure.”

Kluth’s approach, like that of his employer, is refreshingly retro. “For centuries, from the days of Plutarch on, people read about the lives of great individuals, believing that the life trajectories of Great Men could teach them something about their own lives, but we stopped doing so in this last generation,” he says. And that’s a bad thing: sometimes you need a Hannibal to tell you to bail on investment banking.

After two glasses of wine downed apiece, we wind down the conversation. And then, around the time I should be bringing us around to small talk, I find myself asking Kluth whether he feels guilty. You know, in general. As a German. Sorry, but I can’t resist. He’s an introspective history buff employed by Brits with a family stake in the building of the postwar European project. How can I not ask about the war?

“I think about that a lot, and we should make that the subject of our next get-together.”

His tone suggests it might also be the subject of his next book.