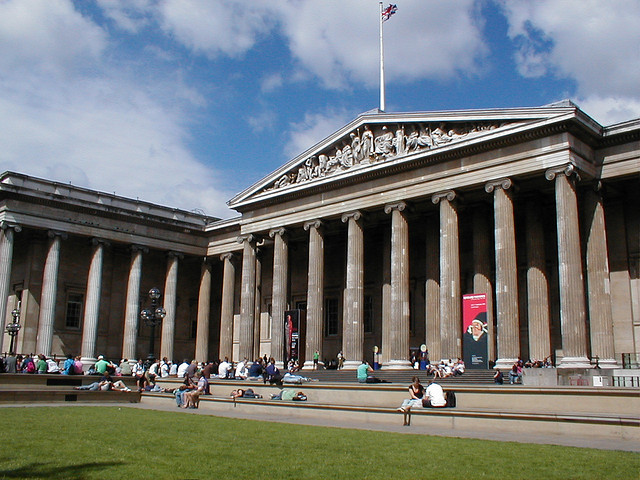 Life is hard and people are busy, and yet museums have become extraordinarily popular. In 2009 alone, the world’s 30 most popular exhibitions attracted more than 12 million people, and the total attendance of North America’s 100 largest museums was over 42 million. Despite everything else they do, millions of people go to museums and spend hours looking at works of art, watching films, having lunch, and finding community in a safe, public place in the company of beautiful things–new and strange things, things that enlarge their world and encourage a sense of being a part of the history of human existence.

Really? I argue the opposite. By presenting the artifacts of one time and culture next to those of other times and cultures, without privilege or prejudice, encyclopedic museums encourage curiosity about the world, increase understanding, and dissipate ignorance and superstition. They demonstrate a truth about art: that it has never known political boundaries. It has always been dynamic, formed through exchange with diverse peoples.

The first public, encyclopedic art museum, the British Museum, was founded in 1753. It represented the Enlightenment belief that building a large collection of the world’s many natural and artificial things and subjecting them to a rigorous scientific examination (i.e., reasoned inquiry) could teach us truths about the world for the benefit of humankind.

Such inquiry was not meant to be exclusive to specialists, however. As the philosopher David Hume put it, the “separation of the learned from the conversable world” had been “the great defect of the last age,” in which learning had “been as great a loser by being shut up in colleges and cells.” Enlightenment was available to anyone whose intelligence could be cultivated by access to clearly argued philosophical positions. Clear thinking, plain words, and modesty are to be the intellectual’s goals, setting reality above verbality and creating “a commonwealth of polite letters.”

From the beginning, the British Museum saw its public responsibility as one not only of collecting things about the world but also of organizing and presenting them in reasonable ways that might attract the public’s attention to the objects in themselves.

This is as true today as it was 250 years ago. Museums still hold as their core mission to collect, preserve, and present things in the public’s interest. In presenting them, museums are fully aware of the choices they make. They arrange things in a particular way and often work hard to justify organizing the installation of their collections in one way or another. But they know that their visitors are likely to experience the museum as they wish. The more museums seek to control their visitors’ experience the more frustrated their efforts will be. As the critic Adam Gopnik once said, “Maybe I’m just too dense to get it, but it seemed to me that, in fact, your experience of walking through the Museum was that you made up your own story and you did it simply by not paying attention to things that didn’t interest you.” That’s true, even if, as the art historian Michael Baxandall reminds us, “it is not possible to exhibit objects without putting a construction upon them.”

Recent academic writing on museums has focused on this issue. Take the writings of art historians Carol Duncan and Alan Wallach. For them, “the museum, like other ceremonial monuments, is a complex architectural phenomenon that selects and arranges works of art within a sequence of spaces … [and] organizes the visitor’s experience as a script organizes a performance.” By performing the ritual of walking through the museum, “the visitor is prompted to enact and thereby to internalize the values and beliefs written into the architectural script.” And that script, we are told, is state power. Museums “embody and make visible the idea of the state,” and for a viewer this “intensifies his attachment to the state” as well as “the power and social authority of a patron class.”

Another scholar, Donald Preziosi, sees the chronological installation of objects by national school or civilization (Assyrian, Egyptian, Greek, Roman, Medieval, Renaissance, Modern–all from a European perspective) as creating a perception that today’s visitors are among the elect and most advanced people. “Chronology becomes genealogy, which in turn becomes evolution and progress, and everything becomes oriented and arrowed with respect to its pertinence, its contribution, to the fabrication of the present,” Preziosi writes. As the museum is a seeing experience (one looks at things), Preziosi figures the museum frame as an “optical instrumentality for the positioning, the siting (and the sighting, the rendering visible, the framing) of modern(ized) populations in and for history that was itself deployed, both museographically and historiographically, as the unfolding of the transcendent truth.” Again, in doing so, the museum makes the visitor a subject of the state and makes works of art serve as “the most telling products of the human mind, and a universal standard against which all that was not Europe might be measured, graded, and ranked down along the slopes of European modernization.” And that’s before Preziosi even gets started on psychology:

The object [work of art] can only confront the subject [museum visitor] from a place where the subject is not. It is in this fascination with modernity’s paradigmatic object–with ‘art’ as such in museological and discursive space–that the subject or spectator is ‘bound over’ to it, laying down his or her gaze in favor of this quite remarkable object. And it is in this fascination that we find ourselves, as subjects, remembered (repairing our dismemberment). Museums disarm us so as to make us remember ourselves in new ways. Or, to put it another way, museums help us to forget who we are.

The modern museum of art may also be understood as an instrument of compulsory heterosexuality, one of the chief productions of the institution, after all, is the engendered subject. The typologies of gender positions are among the museum’s effects: the position of the museum user (‘viewer’) is an unmarked analogue to that of the (unmarked) male heterosexual pose/position. So much has been clear; what may be less apparent is that all art is drag, and that hegemonic heterosexuality is itself a continual and repeated imitation and reiteration of its own idealization. Just as the viewer’s position in exhibitionary space is always already prefabricated and bespoken, so also is all gender (a) drag.

To these critics, museum installations–and thus museums themselves–are never not ideologically motivated and strategically determined. By shaping the discourse, they are always exercising their power.

Well. Is this your experience of museums? Do you feel manipulated by a higher power–a “meta-narrator” or the ruling elites of your city or perhaps the state itself? Do you feel yourself “gendered?” Is it ritualistic? Do you even experience the museum the same way twice? Even if the museum has a message, perhaps you can make up your own mind. After all, if these critics are able to escape the hold of the state, why can’t you? Are their powers of reasoning so rare and refined? This is just the kind of specialist knowledge hoarding that Hume railed against.

Whatever the French state’s political ambitions might be for the Louvre, I’ve never felt the French state in the museum or its collections. It is the objects that hold my attention. Even the museum’s Pyramid entrance, which offers four cardinal points of entry, confounds any attempt to script the visitor’s experience. Visitors wander as they wish. That’s one of the great pleasures of museums.

I suggest that curiosity is possible, even inevitable, in any kind of installation that foregrounds the object–gives it room–so that it can be seen easily. That’s enough to trigger curiosity.

Whenever I argue the promise of encyclopedic museums in public forums, I am confronted with the charge that such museums are the result of empire, of stronger nations enriching themselves at the expense of weaker ones. I always reply that while they might be witnesses to empire–and not only in the years since their founding, but, with their deep historical collections, ever since imperialism has existed in the world–encyclopedic museums are not instruments of empire.

The legacy of empire–whether political, economic, or cultural, and always entwined with colonialism and nationalism–is complex and needs to be considered carefully. But the diverse collections of the encyclopedic museum only underscore the fact that, as Edward Said has written, “partly because of empire, all cultures are involved in one another; none is single and pure, all are hybrid, heterogeneous, extraordinarily differentiated, and un-monolithic.”

A blue and white Chinese ewer is evidence of empire, surely: the Ming Empire during which it was made, the Safavid Dynasty of the Iranian Empire through which it likely passed, and the imperial reaches of the East India Company that brought it to Jacobean England. So is a Benin plaque bearing the imprint of the historical Benin Empire and the impact of the Portuguese and British empires. So is the Gandharan Bodhisattva, witness to empire from Cyrus’s Persia to that of Alexander the Great and the subsequent Mauryan, Kushan, and Sasanid empires. Empire is everywhere in the encyclopedic museum, for empire is a fact of history. So what does one do with this?

Said’s answer was to look at the intertwined histories of cultures at a granular level. This seems right to me. Encyclopedic museums hold the promise of promoting curiosity about the world’s many cultures. And “the map of the world,” Said once wrote, “has no divinely or dogmatically sanctioned spaces, essences, or privileges.” The encyclopedic museum was founded on the Enlightenment principles of suspicion of unverifiable truths, opposition to prejudice and superstition, confidence in individual agency, the public exercise of reason, and the promise that critical inquiry leads to truths about the world for the benefit of humankind.

This, I hold, is why those millions of people are coming to our museums: they want to experience the larger world and to feel a part of its rich and fecund diversity and be ennobled by it.  In in our era–one of resurgent nationalism, sectarian violence, and military-backed, hardened ideological conflict–museums matter. Now more than ever.

James Cuno is president and CEO of the Getty Trust and the author, most recently, of Museums Matter: In Praise of the Encyclopedic Museum.