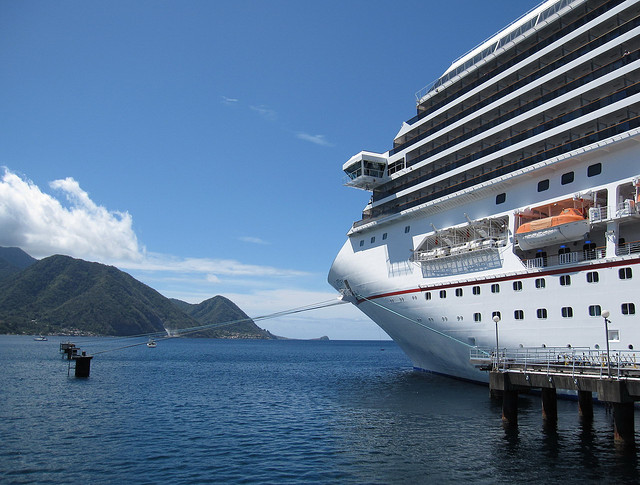 The tragic story of the Costa Concordia cruise ship hitting a rock after veering four miles off course hit close to home for me. A few months ago, I was working onboard a similar ship. A century after the Titanic went down, we tend to think of such sea-faring accidents as impossible, but having reflected on my own experience, I have to admit it’s not that surprising.

My improbable nautical gig was that of art auction associate. I signed on for a six-month contract to work for the art gallery aboard a major line. It was my job to assist in the production of live art auctions and perform sales and presentations within the onboard gallery. Art auctions on a cruise? As a matter of fact, our sessions were among the most popular events (bingo offered stiff competition), often bringing in as much as $30,000 in sales throughout one cruise. Plenty of repeat cruisers were avid aficionados, and some even went on the cruise solely so they could purchase a Peter Max or Thomas Kincade painting. 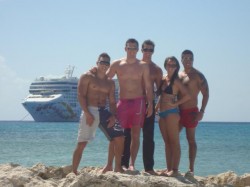 The job, which I discovered online, was immediately appealing at a time in my life when cubicles and microwave lunches just weren’t cutting it. Adventure! Travel! The high seas! It was the perfect escape.

Upon arrival to my first assigned ship, I was given no instructions other than to show up. After being herded like cattle through the “I-95” (the main crew hallway that runs through the whole ship), I was given a ship ID and a key to my new room. Before dropping off my luggage and checking out my new digs, though, I was taken to a meeting room where the head nurse awaited. She explained that crabs, chlamydia, and herpes were running rampant, and that complimentary condoms were available 24/7 in the Crew Internet Café. Yikes. I began to worry that my luxurious job aboard an oversized yacht was going to be a dirty ocean orgy.

My new digs were smaller than my childhood walk-in closet and consisted of bunk beds, a desk, and a bathroom the size of a coffin. Below-decks society was highly stratified. Cruise staff like myself were entitled to eat in the staff mess while housekeeping and kitchen staff were only permitted to eat in the crew mess, a dirtier, busier dining area with fewer selections. The food was decent and plentiful in our mess, and I was freed from the microwave.

The ship was a veritable United Nations. Out of 1,100 crewmembers, only a dozen were Americans. The rest of my colleagues were Filipinos, Indians, Europeans, South Africans, Aussies, and workers from the Caribbean islands we frequented. The ship had cliques, with the entertainment, spa, fitness, and art teams usually sticking together. The insanely overworked kitchen staff, housekeeping, and engine crews usually kept to themselves. Most crewmembers from the developing world weren’t seeking adventure but rather a way to feed their families halfway around the world. Every other week upon being paid, they’d send their earnings to the loved ones they desperately missed. Having them clean my room when I woke up hung over and headed to the beach on port days really put things into shameful perspective. 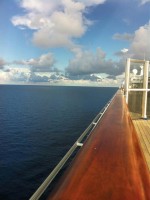 All crewmembers were required to wear their assigned uniform and name tag while in guest areas and to smile and help any passenger in any way possible. If these rules were not followed, crewmembers would be reported to security, with immediate repercussions. Crewmembers were allowed to have sex with each other to their bodies’ content, but passengers were off-limits. More than once, one of our colleagues was escorted off ship by security at the next port for consorting with guests.

The hardest part of the job was the never-ending routine of ship life. With seven-day cruises, we were expected to welcome new passengers every Sunday on Embarkation Day like it was the first day of the most exciting week of our lives, when in reality everyone was counting down the weeks to the end of their contract and would rather be run over by a bus than do another safety drill.

It’s bad enough having a monotonous job; but think what it would be like to live 24/7 at the office–a cramped office. It got pretty suffocating. On port days, when we could get off the ship to to use the Internet or relax on a beach, it was extremely tempting to not get back on. If the sea initially beckoned as the ultimate escape, now it was land that seemed tantalizing. There were multiple times where I pondered the idea of making a home for myself in Cozumel, Mexico or even Montego Bay, Jamaica. But I always made my way back to the ship.

Despite all the negatives, there was one place on the ship where crew members could gather out of uniform and forget about customer service: the crew bar, a divine Mecca of cheap and delicious booze, where a Stella could be had for $1.50, and popcorn was on the house. If you weren’t working, sleeping, or having sex, you were in the crew bar. Almost every good memory I have of working on ships took place there. Whether it was karaoke night, a toga party, or simply a nightcap after a long day’s work, the crew bar provided happiness and comfort. Or was that the tequila?

Incidentally, a friend clued me into the two key rules for crew bar. One, you order no more than two drinks at a time. Two, stay far away from the Italian officers. Easy, right? Wrong. First of all, after a 12-hour day of dealing with overweight, drunk cruise passengers, it’s nearly impossible not to run your ass to the crew bar and insert an IV of hard liquor into your arm. Second, those Italian officers sure could pounce. Although these men had wives and families back home in Italy (where the ship was manufactured), they had a reputation for saying or doing anything to get into your skinny jeans. Not only would you find all the junior officers at crew bar every night in their stark white uniforms winking and waving, but often an appearance was even made by the head safety officer and captain of the ship.

So I wasn’t surprised to learn that the Costa Concordia officers and crew weren’t on top of their game when tragedy struck. Although all cruise crewmembers are required to conduct perfunctory weekly safety drills as well as monthly exercises to understand their role in the case of an emergency, I wasn’t really trained or prepared to do anything other than panic. Sure, I can tell you how many people will fit in one lifeboat or where on deck you can find extra life jackets, but trust me … you don’t want your life in my hands. And I can guarantee you most crewmembers feel the same way.

For all my complaints, though, my short cruising career was a good experience. I worked hard, learned a lot about (non-emergency) customer service, and walked away with far more appreciation for the opportunities in my life and the awesome sacrifices many people from around the world make to feed their families. I made deep friendships, and I broadened my worldview and range of skills.

Not that I would ever do it again.

Kelsey Scott lives in Los Angeles, where she is searching for her next life adventure.