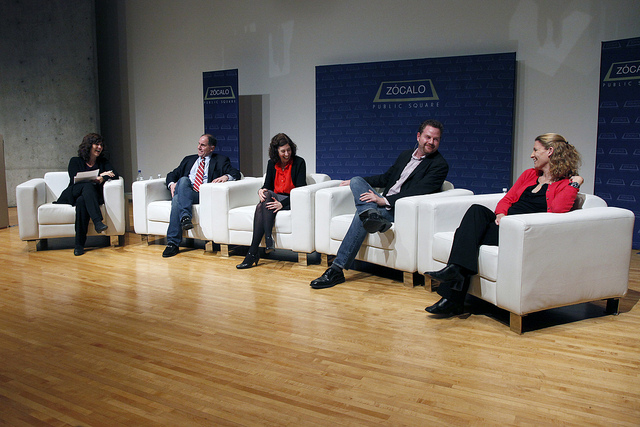 How much should we love what’s on TV? A panel of critics, producers, and television writers agreed that a lot of shows today are excellent and that viewers have more choices than ever. But they didn’t reach consensus on much else. Instead, in front of a crowd at the Grand Avenue MOCA, at an event co-presented with Occidental College, they cheerfully locked horns.

Moderator Kim Masters, host of KCRW’s The Business and editor-at-large at The Hollywood Reporter, opened the evening by asking if this is TV’s golden age. Homeland and Cold Case writer and producer Meredith Stiehm said she was of two minds. “I might say that the network show is dwindling, quality-wise,” Stiehm explained, pointing to the rise of a lot of lousy reality television. But cable is “golden, at least as far as drama goes.”

Occidental College historian Thaddeus Russell pointed to “more diversity and choice in TV than ever before.” But, he asked, by what criteria do we judge quality–and how do we avoid becoming elitist in the process?

For writer, TV consultant, and former USA Network executive James Andrew Miller, today is absolutely not the golden age of television, even if technologies like DVR make it a great time to be a viewer. “I’m not a particularly big fan of the narrowcasting” you see on TV today, he said. By contrast, in the 1970s, programming was broad in its appeal, and the TV business made “a quantum leap in terms of what it’s able to do.” Then, in 1981, came the launch of Hill Street Blues, to which most of the great series of today can trace their pedigree. 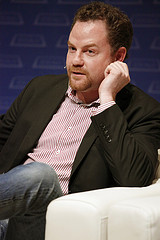 “My whole thing is, I don’t need the show about cakes,” said Miller, eliciting laughter.

Russell said that critics who hate reality shows are placing themselves “in the one percent,” although he admitted to skepticism about a show about storage lockers. (And it didn’t help when he learned there are in fact three different shows about storage.) “There are many more people than us voting with their feet to watch these things,” he said. “We establish ourselves as superior to them by thinking that what they’re watching is junk.”

Weiss, who blogged for the Globe after every episode of American Idol, spoke out again for the merits of reality TV. “That show at its height was the equivalent of being a Red Sox fan,” she said. “I thought it really served a public purpose–a community purpose.”

Even Stiehm, who writes for a Golden Globe-winning show, admitted to liking American Idol–“a great equalizer.” And Project Runway is proof that “reality shows across the board are not junk.” 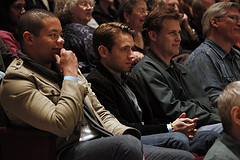 Junk or not, reality shows often bring in much larger audiences than scripted ones. Does it make sense, asked Masters, which shows become popular and which don’t catch on?

At USA, Miller said he “was reminded daily that none of us know anything.” The first pilot he acquired was Monk, and people told him that the show would never work. He was even accused of casting Tony Shalhoub “because he looks like you.” But Monk became a success. Then again, so did The Biggest Loser, which Miller passed on.

So what makes a good show?

Certainly, level of effort is no reliable indicator, nor is level of popularity. Even writing a bad television show is difficult, said Stiehm, who moved from Beverly Hills, 90210 to NYPD Blue in the mid-1990s. NYPD Blue creator David Milch told her, “‘Television does not demand quality, but it doesn’t preclude it either.’” There are many writers’ rooms content with mediocrity, but Stiehm prefers to work harder to climb higher. “I had no idea Homeland was going to be popular,” she added, revealing that she questioned whether people would want to see a post-9/11 show about terrorism. “I’m glad people took to it,” she said, but a lot of other great shows never find an audience.

Before the question-and-answer session, Russell returned to the idea that, whether it’s higher quality or not, television is indisputably more diverse today than ever. The representation of African-Americans has doubled from the 1970s (from 6-7 percent to 14 percent), Latinos have gone from 1-2 percent to 7 percent, and the number of gay characters has increased from zero to about 150. Ironically, he said, the two men responsible for this are Ronald Reagan and Rupert Murdoch. The media deregulation under Reagan’s watch allowed Murdoch to establish a fourth television network, which eventually led to the hundreds of channels on our screens today.

In a spirited question-and-answer session, guests (including past and present television professionals) asked the panelists to expand on some of their ideas. 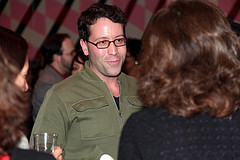 Isn’t the fact that film actors are abandoning the big screen for the small proof, asked one audience member, that we’re in a golden age?

“What you’re seeing is largely a reflection of strain on the movie business,” said Masters. The film industry is in more trouble than the TV industry. There’s no longer a stigma attached to TV, added Weiss, which is a reflection of the good roles, great writing, and increased quality of the medium.

Another audience member (who admitted that he didn’t know much about pre-1998 TV) asked if the panel was giving viewers enough credit. Don’t people simply laugh at reality TV hijinks? Isn’t it a little like eating potato chips? And isn’t nostalgia for the past colored by rose-tinted glasses?

“I love rose-tinted glasses and nostalgia–I love looking back,” said Miller. “I still watch I Love Lucy. I think there’s something to be said for good shows now, but it’s easy to forget how much good stuff preceded it.” 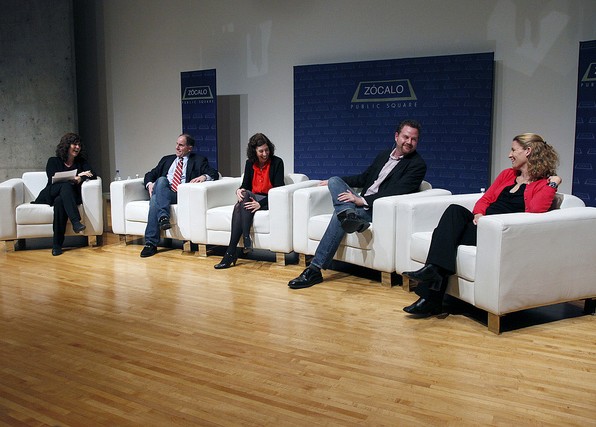