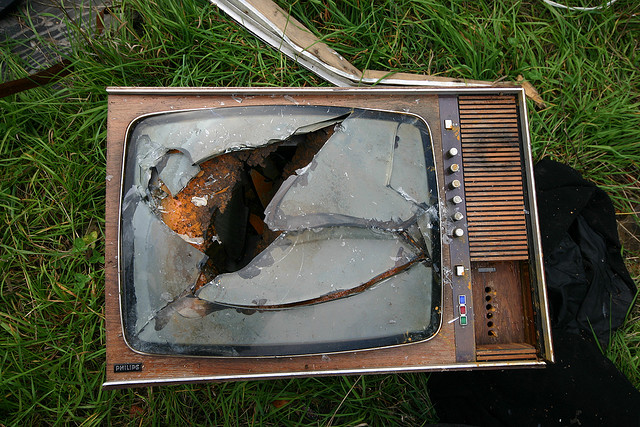 In 2006, I served a long year in the psych ward/nursery school that was the writers’ room for the quickly cancelled NBC drama The Black Donnellys.

The show held great promise, as much as any of the half-dozen or so I worked on before Hollywood’s writers went on strike in ’07-’08 and the Internet changed the way television is made and watched.

The pilot for the Donnellys played like a small, beautiful movie and the creators–Paul Haggis and Bobby Moresco–won the best picture Oscar for Crash not long after we settled into our production offices in Santa Monica.

Once, I found myself alone in the office with Haggis and a junior member of the writing staff, a true believer in the importance of television. This was a woman who–more or less out of nowhere–would exclaim during story sessions, “How much do I LOVE this show?”

I speak my mind more than is prudent in Hollywood. My agent once scolded me–after I had called an especially inane spade a spade–and told me that producers don’t really care what I think. They only ask for opinions to be told how great they are.

Moving to checkmate me before the boss, the woman told Haggis, “Rafael hates TV.”

Bemused, Haggis looked at me with a smirk that said, “Is that so?”

I paused, smiled back at Haggis, and corrected her.

“I said I have contempt for television.”

As a staff writer for The Wire–the HBO street drama filmed in my hometown of Baltimore–I was a part of television history. The show received praise usually reserved for Pulitzer-winning tomes of sagacity and sweep.

The Wire (originally broadcast from 2002 to 2008, with a huge afterlife on DVD both here and in Britain) is often called the best show in the history of television, the keystone of the medium’s second and continuing Golden Age.

So intense was passion for The Wire that the book editor of the Edinburgh Scotsman newspaper flew to Baltimore without knowing a soul in the hope that someone might show him where the real shit went down. I took this man, David Robinson, to all the places City Hall wishes the world would never see, much less associate with the Crown Jewel of the Patapsco River Drainage Basin. When the tour ended, Robinson asked if there was anything he might do to return the favor.

I asked if he could publish one of my short stories in the Scotsman. He said yes, quickly adding, “Can you make it like The Wire?” (I tried, and thus came a short story called “Rolling With the Seasons.”)

I only participated in this golden age–writing an episode in each of The Wire’s first three seasons and helping craft season two’s waterfront culture from my family’s seafaring history–from one side of the box.

Although I enjoyed my share of childhood television in the ’60s and early ’70s–The Munsters were a favorite, along with Sanford and Son–I stopped watching by the time I got my driver’s license. I often thought TV was for people too easily amused or too lazy or too stoned to do something less passive. I still do.

When my children were still in grade school, I put the set out with the trash.

The oldest, Amelia, is an actor in L.A. Her brother, Jake, is a Philadelphia cartoonist who pays the rent as a chemical engineer. And their little sister, Sofia, is a Juilliard-trained playwright in New York City.

My time in Hollywood helped pay for their college educations: NYU, the University of Delaware and Bennington, respectively.

Those years–spring 2005 through Thanksgiving 2008–were the only time I lived anywhere but Baltimore. I went from The Wire to Thief on FX (for which Andre Braugher won an Emmy) to The Black Donnellys (where my biggest thrill was naming a horse for the writer Lester Bangs) to NBC’s Life (which fired me less than 24 hours after the writer’s strike ended).

Since then, I have busied myself writing books, collecting oral histories of ordinary Baltimoreans, and then–once they pass from the world’s only reality show–writing their obituaries.

When I do get glimpses of television, it is at my parents’ house, where Mom watches all day long and sleeps with it on, while Dad relives his Depression childhood down in the basement with the History Channel.

Mom’s constant complaint is “TV is lousy,” yet she never turns it off, preferring re-runs of Little House on the Prairie and ’70s game shows to the stuff credited with gilding 21st century TV: Mad Men, Breaking Bad, and–for some–The Good Wife.

She has never watched The Wire for more than five minutes, saying she can’t stand to hear that four-letter word that begins with an F. I assured her that I never put that word in any of my scripts, that I left it blank and David Simon filled it in later.

But from what I see on commercials between breaks in the NFL games I watch at my father’s house after eating pasta, our epoch is only a Golden Age if you exclude 95 percent of what is put on the air.

Dumb shows about dumb people screaming dumb things at each other; comedies that aren’t funny, only insulting; police procedurals less mysterious than a crossword puzzle; lots of nudity from people–often drunk or stupid or both–who shouldn’t take their clothes off in the shower, much less on TV; and endless stories of greed and violence.

And how many TV judges does a free society really need?

At the height of the 2008 gasoline price crisis, I pitched a show about a family who owned an independent gas station and found their meager income depended more on sales of potato chips and soda pop than on sales of fuel.

The show was called Blood for Oil, and I was told it was too earnest, too serious, too depressing. I was told, “No, thank you.”

Yet Dexter–the very successful, six-season story of a serial killer–is often praised as one of the best shows in recent years.

I would argue that we are only in a Golden Age because the river of television has been broadened–and perhaps deepened here and there–beyond anything Desi Arnaz would have recognized by the advent of cable and the Internet.

There is more gold because there is so much more trash.

I wrote an essay for a 2009 MIT Press anthology called “Third Person,” an exploration of “vast narratives” edited by a couple of guys obsessed with The Wire.

In it, I said that the original Golden Age of television (how strange that the honorific is applied to the genre’s infancy) used literature and theater as primary sources for small-screen drama.

Way back when people still dreamed of writing the Great American Novel.

Consider an extraordinary episode of The Outer Limits from 1963 called “The Man Who Was Never Born.”

Directed by Leonard Horn, the episode was written by Anthony Lawrence, who would go on to write a TV movie about Liberace.

We see a very young and earnest Martin Landau giving a time-traveler from earth in 1963 a tour of the future, a 2148 A.D. glimpse of what remains of our great civilization.

“Come,” says Landau, human yet monstrously deformed, his face a bloom of boils and blisters created by a corrupted microbe that destroyed the human race. “I will show you all that’s left of moments, men, and places.”

And he takes the astronaut to a deserted library where the architecture is futuristic and spare, the books old and leather bound.

“Here lies the protected history of man,” says Landau. “The cherished words and pictures of all he has known and loved. The noble Hamlet; Anna Karenina putting on her gloves on a snowy evening; Gatsby in white flannels. Moby Dick and Mark Twain’s whole meandering Mississippi.”

Stung, the astronaut grabs Melville from a shelf and reads a random passage aloud. “Hope proves a man deathless.”

“There is no hope here,” says the mutant.

To which the astronaut–as though using his time machine to watch a week’s worth of TV in 2012–replies:

Rafael Alvarez, a short story writer and creator of the Orlo and Leini stories, is author of Truth Be Told, a companion encyclopedia for The Wire.